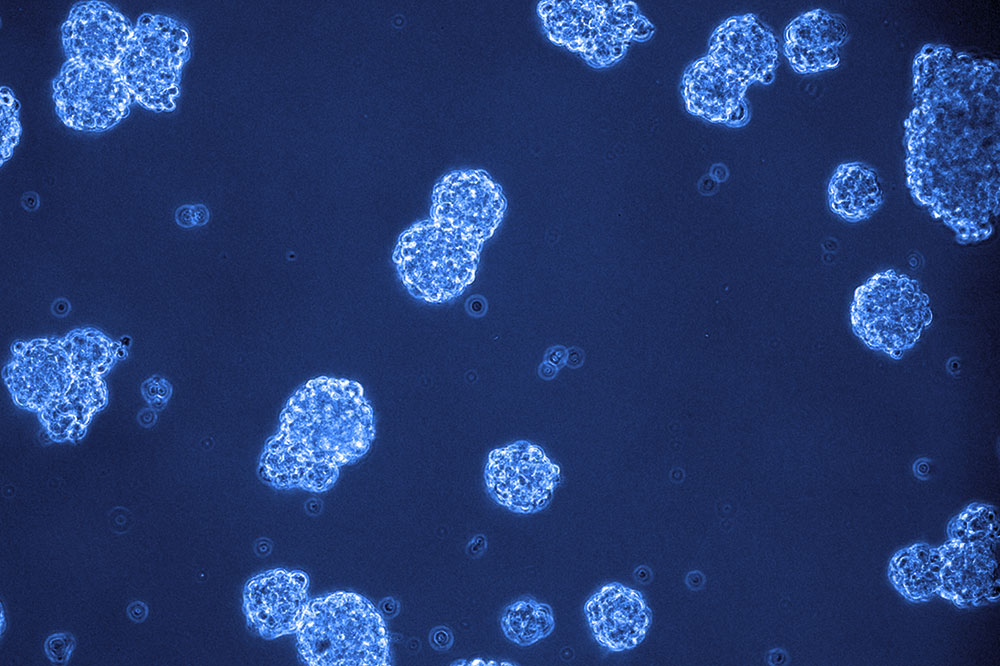 DIPG cells, pictured here, are generally resilient and replicate rapidly. With a dose of MI-2, however, the cells abruptly die.

There could be new treatments on the horizon for diffuse intrinsic pontine glioma, or DIPG, a devastating form of brain cancer that afflicts young children and is currently incurable. Recent experiments in animal models of the disease have identified an experimental drug that effectively destroys DIPG cells. And a team of Rockefeller scientists just figured out how this promising compound works.

The research, described in Proceedings of the National Academy of Sciences, shows that the drug acts on cellular cholesterol pathways, and suggests that these pathways may be fruitful targets for treating a variety of brain cancers.

DIPG tumors are located in the pons, a highly sensitive structure that connects the brain to the spinal cord. Surgical removal of tumors is effectively impossible since it poses the risk of fatal brain damage. And although radiation can be used to temporarily reduce symptoms, the cancer inevitably grows, with an average survival rate of less than one year. Which is to say: there is a pressing need for new ways to treat children with the disease.

An auspicious development came in 2014 from a collaboration between the labs of C. David Allis, the Joy and Jack Fishman Professor, and Viviane Tabar, Chair of the Department of Neurosurgery at Memorial Sloan Kettering Cancer Center (MSKCC). The team showed that a compound known as MI-2 stops tumor growth in a mouse model of DIPG. The drug was already on scientists’ radar for the treatment of leukemia, and was known to work on leukemia cells by interacting with menin, a protein that regulates gene expression. So when Allis’ team began investigating the effect of MI-2 on DIPG cells, they initially suspected that it would work in a similar manner.

“Our first hypothesis was that the drug switched off genes by interacting with menin,” says Richard Phillips, a neuro-oncologist at MSKCC and a visiting fellow in the Allis lab who spearheaded this effort. “But as we probed a little bit further, many of the things that we would expect to see didn’t pan out.”

For example, when the researchers genetically removed menin from glioma cells, those cells remained sensitive to MI-2, indicating that the compound exerted its effects via a pathway distinct from that observed in leukemia. The scientists then discovered that DIPG cells exposed to MI-2 failed to maintain healthy levels of cholesterol, and quickly died; but the cells could be rescued with a dose of supplemental cholesterol—suggesting that, in the case of glioma, MI-2 works by depleting the nutrient. Eventually, the researchers discovered that MI-2 directly inhibits lanosterol synthase, an enzyme involved in cholesterol production.

The researchers also found that, while MI-2 destroys glioma cells, the drug doesn’t damage normal brain cells. This finding is consistent with other research showing that some cancer cells are particularly vulnerable to cholesterol disturbances.

This study contributes to a growing body of research pointing to cholesterol interference as a promising new way to treat cancer. Moving forward, Phillips and his colleagues hope to develop compounds that are optimized for targeting brain cancer. As a starting point, they are studying a number of cholesterol-reducing compounds that are already on the market.

“Some existing drugs, initially made for people with high cholesterol, were designed to target lanosterol synthase—but they were never really thought of as cancer drugs,” he says. “One of them is even more potent than MI-2, so we’re now working with a team of chemical biologists to see if we can modify the drug so that it reaches the brain.”

More broadly, this research highlights the importance of knowing not just that a drug works, but how it works. In this case, the discovery that MI-2 acts on lanosterol synthase revealed that DIPG tumors are sensitive to cholesterol interference—a finding that opens avenues for the production of even more effective compounds.

Says Phillips: “You can’t assume that what it says on the label is actually how a drug works in your biological system.”

A problem in reader proteins that identify which gene is up for expression may cause normal cells to turn malignant during development.

Research that began with the analysis of two developmental syndromes ultimately helped scientists understand how diverse epigenetic mechanisms can combine to drive tissue overgrowth in cancer.

C. David Allis elected to the National Academy of Medicine

Allis, whose pioneering research established that enzymes that modify histone proteins, which package DNA in the nucleus, regulate gene expression, has been elected to the National Academy of Medicine.