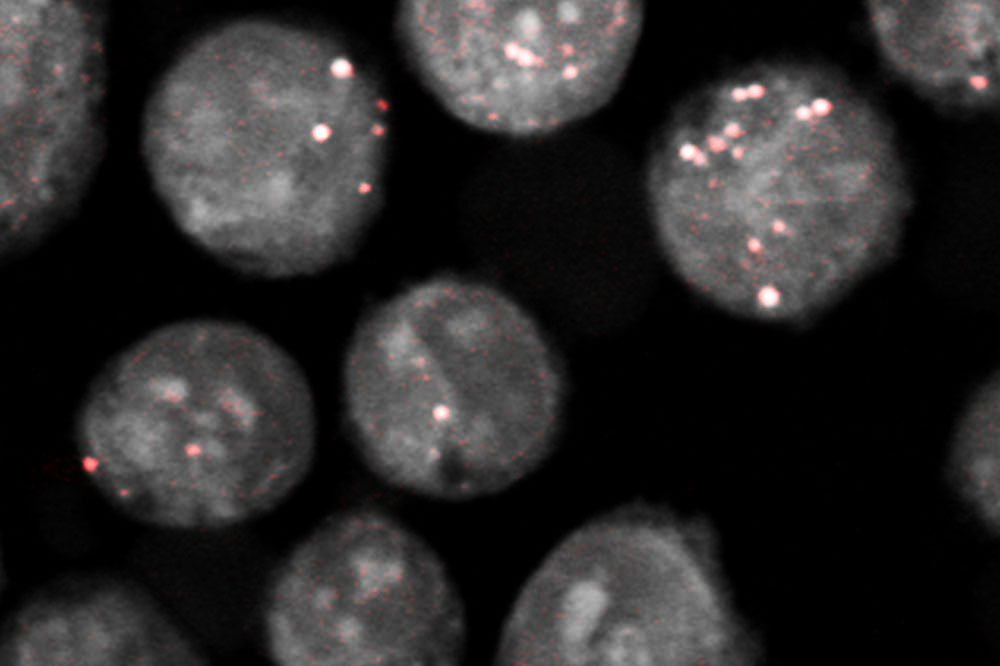 Some cancer cells cannot produce cholesterol, and instead build up an excess of squalene (pink)—a molecule that may help these dangerous cells thrive.

Cancer cells are, in some respects, impressive: They can grow relentlessly, sidestep the aging process by becoming immortal, and evade the immune system’s persistent attacks. But in the process of acquiring such superpowers, the cells must occasionally relinquish other, more mundane skills—including the ability to produce certain nutrients.

Researchers at The Rockefeller University now announce the discovery of a rare tumor type that is unable to synthesize cholesterol, a molecule without which cells can’t survive.

“These cells become dependent on taking up cholesterol from their environment, and we can use this dependency to design therapies that block cholesterol uptake,” says Kivanç Birsoy, the Chapman Perelman Assistant Professor, who reports the findings in Nature.

Cutting back on cholesterol

Birsoy has long been fascinated by the fact that, in rare cases, cancers lose the ability to make key nutrients. Some types of leukemia, for example, are unable to synthesize the amino acid asparagine. As a first line of defense against these cancers, doctors give patients a drug known as asparaginase, which breaks down the amino acid, removing it from the blood. Without access to external stores of the nutrient, the cancer cells die.

Birsoy and his colleagues – including Javier Garcia-Bermudez, a postdoctoral fellow in Birsoy’s lab – set out to look for other cancer types that might be vulnerable to cut-offs in nutrient supply. The researchers looked first to cholesterol, an essential ingredient for all dividing cells. Typically, cancer cells either make cholesterol themselves, or acquire it from the cellular environment, where it is present in the form of low-density lipoprotein (LDL).

The researchers placed 28 different cancer cell types in an environment that lacked cholesterol, and noted which ones survived. Cells associated with a rare type of lymphoma, known as ALK-positive ALCL, did not endure these conditions, suggesting that these cells could not synthesize cholesterol on their own.

When the researchers reviewed gene expression data from the cholesterol-dependent cell lines, they discovered that these cancers lacked an enzyme involved in the synthesis of cholesterol. Without this enzyme, the cells accumulated squalene, a poorly studied metabolite that acts as a precursor for cholesterol.

Though the inability to make cholesterol should be a bad thing, a buildup of squalene, Birsoy notes, may actually be beneficial to cancer cells. “These cells need to deal with oxidative stress in their environment. And we believe squalene is one way to increase antioxidant capacity,” he says.

In another experiment, the researchers knocked out the cancer cells’ LDL receptors, a primary means of absorbing external cholesterol. As a result, the cells had no access to the nutrient and died. This outcome  points to a novel way to kill ALCL cells, which can become resistant to chemotherapy. “We think therapies that block uptake of cholesterol might be particularly effective against drug-resistant forms of ALCL,” says Birsoy.

Moving forward, the researchers plan to screen other cancers for similar vulnerabilities. Says Birsoy: “This is part of a larger strategy of looking for nutrient dependencies or deficiencies in various cancer types.”

Scientists find new clues about how the body stores fat

Scientists discovered a protein that plays a crucial role in regulating fatty acids, the molecules that make up body fat. This research could lead to new options for treating people with diseases associated with fatty acid buildup.

A new tactic for starving tumors

Scientists have found a metabolic particularity in tumor cells lacking oxygen. The discovery might point to new drugs to target the most difficult-to-treat spots within a tumor.