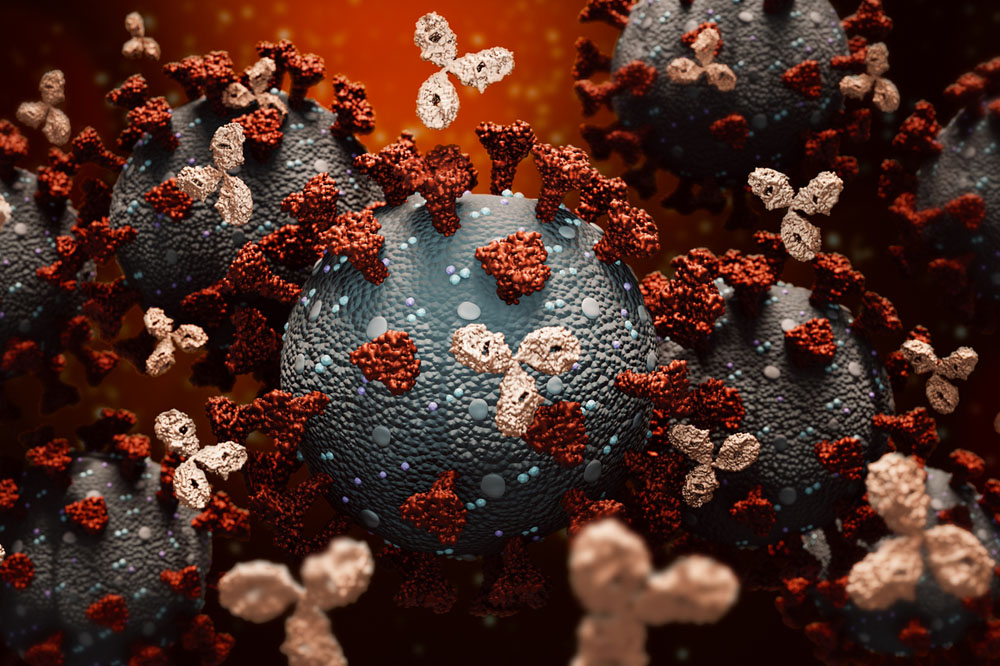 With green light from the FDA, Rockefeller scientists started human trials this week for a new monoclonal antibody drug as a potential treatment for COVID-19.

Monoclonal antibodies are mass-produced replicas of natural antibodies made by the immune system to fight viruses. Designed to prevent people with early COVID-19 from developing severe disease, the treatment can be life-saving and is urgently needed as hospitals continue to be inundated by repeated surges of infection, and mass vaccinations are still several months away.

“If administered early, monoclonal antibodies could stop the virus in its tracks before the immune system has had enough time to develop its own antibodies,” says Michel C. Nussenzweig, head of the Laboratory of Molecular Immunology, who led the project in collaboration with Paul Bieniasz, Marina Caskey, Theodora Hatziioannou, Charles M. Rice, and others.

Monoclonal antibodies are among the most promising investigational therapies for the disease. Two such treatments, developed by pharmaceutical companies Eli Lilly and Regeneron, received FDA’s emergency use authorization in November.

Rockefeller’s monoclonal antibodies are based on two highly potent antibodies against SARS-CoV-2 discovered at the university. Even at low concentrations, they can block the coronavirus from gaining entry to human cells and, working together, they minimize the risk of the virus mutating and developing resistance to the therapy.

The path to potent antibodies

The immune system can develop antibodies on its own, but in the case of a novel virus like SARS-CoV-2, the process takes several crucial days. Giving patients an infusion of pre-made antibodies may prevent the virus from replicating freely during this time, slowing the progression of the disease.

To identify the antibodies best suited for therapeutic development, a team headed by Caskey, a professor of clinical investigation, recruited and tested nearly 150 people who had recovered from COVID-19 during the first surge of the disease in the New York City area in April.

From the blood plasma donated by these volunteers, Nussenzweig and colleagues extracted the antibody-producing immune cells using a reliable technique they had developed for their HIV research. A team led by virologists Bieniasz and Rice developed tests for measuring the neutralizing activity of the antibodies, and zeroed in on three with the highest potency.

Having discovered that SARS-CoV-2 mutates under selective pressure, the researchers opted for a combination of two of the antibodies that block the virus in slightly different ways, reducing its ability to mutate. The team then cloned the immune cells that make these antibodies in order to mass-produce them for further studies.

The phase I clinical trial launched this week at the Rockefeller University Hospital will assess the safety of the treatment in a small group of healthy volunteers. If successful, the study, designed by Caskey and led by Christian Gaebler, a clinical scholar at Rockefeller, may lead to larger trials to determine the efficacy of the treatment.