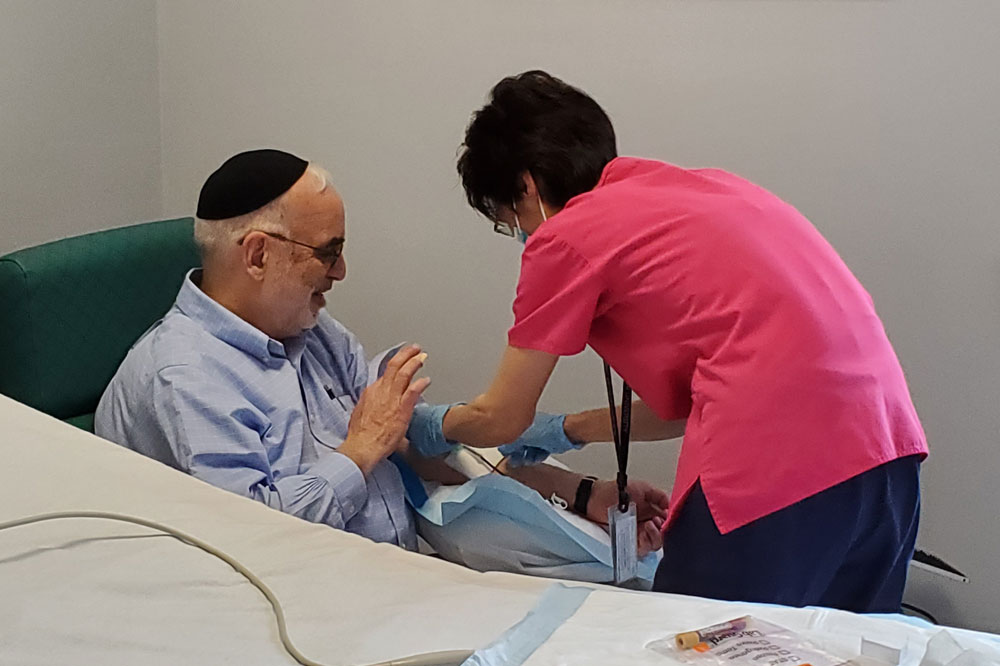 A study volunteer who has recovered from COVID-19 donates blood at the Rockefeller University Hospital.

In the few weeks since New York City came to a socially distanced halt, more than 250 COVID-19 survivors have visited Rockefeller’s otherwise quiet campus to contribute their blood to science. Here, a group of immunologists, medical scientists, and virologists is betting that a cure for the disease can be created from the antibodies of these previously ill patients.

The study is one of nearly 20 COVID-19 projects that have been launched by Rockefeller researchers since early March in an effort to better understand the SARS-CoV-2 virus and speed the development of new treatments.

The team’s plan is to find the so-called elite neutralizers: the minority of people who have conquered the infection so exceptionally that their antibodies have the potential to become drugs.

“We are sifting through millions of antibodies made by each person to find which ones actually neutralize the virus,” says Michel C. Nussenzweig, the Zanvil A. Cohn and Ralph M. Steinman Professor and head of the Laboratory of Molecular Immunology. The project is being led by Nussenzweig, Paul Bieniasz, Marina Caskey, Theodora Hatziioannou, Charles M. Rice, and Davide F. Robbiani.

The same approach has shown great potential against other viruses, including HIV, and there are promising signs even as the study is still recruiting its first waves of donors: The team has already identified a number of antibodies that are able to block the virus from interacting with its receptor. Those with the best potential will move to the next phase of the project, where the researchers will work with industry partners to produce material for clinical testing.

The hunt for special antibodies

When faced with a novel pathogen such as SARS-CoV-2, the virus causing COVID-19, the immune system takes several crucial days to develop antibodies capable of recognizing the pathogen—time that the virus can use to gain a sometimes insurmountable foothold in the body. To give the immune system a head start in its race against the rapidly replicating virus, researchers across the globe have turned to a century-old approach called convalescent plasma, in which a survivor’s blood plasma containing already made antibodies is given to an infected individual.

The treatment could be effective, but has drawbacks. For starters, one donor’s plasma can be used to treat only one or two patients, while antibodies manufactured using the Rockefeller team’s approach could treat virtually any number of patients. “It will be a renewable resource of highly effective antibodies,” Nussenzweig says.

Moreover, the effectiveness of transplants is uneven. Each donor’s plasma varies because antibodies are extremely diverse and not all equally effective. Thanks to the random gene shuffling that immune cells go through to make them, some deliver a glancing blow against the virus while others pummel it.

“When we test plasma samples from COVID-19 patients who have recovered, we find very large variation in the levels of SARS-CoV-2 neutralizing antibodies,” says collaborator Bieniasz, who along with Hatziioannou developed methods to rapidly screen plasma samples and identify antibodies with high neutralizing activity. “In some people the levels are so low that their plasma is virtually inactive, while others have very potently neutralizing plasma.”

That’s where the elite neutralizers come in. “Based on our previous experience studying other viruses, we expect to see about five percent of our volunteer donors to show high levels of potent antibodies in their plasma,” says Caskey, an associate professor of clinical investigation. Further screening this group of people is allowing researchers to sort the wheat from the chaff and identify the so-called broadly neutralizing antibodies, or bNAbs, that have the most potency.

“Convalescent plasma is a blunt 19th century weapon—it can be effective but it’s not very powerful and it can be unreliable,” Nussenzweig says. “bNAbs are precision-guided missiles with nuclear warheads.”

Raising an army of immune cells

To find the useful but elusive immune cells that make the bNAbs, the team uses a technique Nussenzweig developed in 2009, which involves introducing a fluorescent viral surface protein to the blood sample. The cells that produce antibodies against the virus take the bait, and when run through a detection instrument in a single file, they stand out.

Once cloned and produced for clinical use, the antibodies can be given in an injection to fight the virus in patients and prevent infection in high-risk populations such as healthcare workers.

Nussenzweig’s lab and others have used the technique to develop antibodies against a wide range of infectious diseases, including malaria, influenza, hepatitis, and Zika. Most notably, it has shown early but dramatic success in controlling what’s arguably the trickiest of viruses, HIV. Only a very small minority of people are able to develop antibodies against this highly mutating virus; and with their novel technique, Nussenzweig and his colleagues have been able to identify the specific immune cells that make the antibodies, manufacture them in large numbers, and test them on patients. In a recent early-stage study, two of these antibodies were shown to suppress the virus for months at a time in HIV-infected patients. (The HIV bNabs were recently licensed to a biotech company for further development.)

For COVID-19, developing an antibody-based treatment that can similarly suppress the virus or protect against infection for months at a time is crucial, researchers say, because vaccine development may take longer than hoped and some people, many in the elderly population, may not adequately respond to a vaccine.

Thanks to all the technology previously developed and refined during the team’s work on HIV, it now takes no more than a few days to isolate and clone bNAbs for COVID-19, and the team aims to begin manufacturing small batches of its most promising antibodies for testing in as little as one month. Clinical trials will then need to be conducted to ensure safety and test efficacy before any antibody treatment could become widely available.