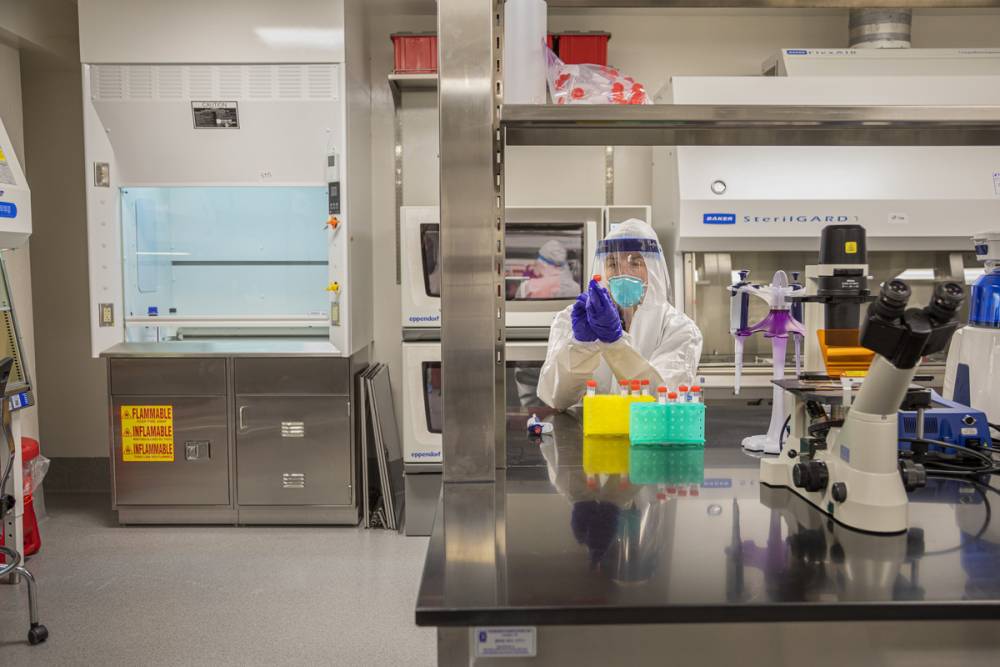 A wide range of projects are underway to help address the need for new interventions to alter the course of the COVID-19 pandemic.

Rockefeller University experts in infectious disease, immunology, biochemistry, structural biology, and genetics have begun over a dozen projects in recent weeks aimed at better understanding the biology of the SARS-CoV-2 virus, which is responsible for the current global COVID-19 pandemic. The research, which involves 18 laboratories and over 130 scientists, has the goal of discovering or developing new, urgently needed approaches to prevent and treat the disease.

Although most Rockefeller laboratories have ceased on-campus operations to reduce the spread of the illness, exceptions have been made for those researchers working on essential COVID-19-related projects. Because the development, scale-up, and deployment of a safe and effective vaccine for the virus is still well over the horizon, the researchers are focusing on parallel approaches to provide alternative means of prevention and therapy, attacking the problem from many angles.

Projects include the development of antibodies and other protein therapeutics capable of preventing or treating the infection; development of small molecules that inhibit the activity of viral or human proteins that are required for viral replication; improved animal models for testing potential treatments; and identification of new vulnerabilities of the virus via both genomic studies of humans with unusual sensitivity or resistance to infection, and cell-based screens using CRISPR gene-editing technology.

“These projects directly relate to pathophysiology, prevention, and treatment of COVID-19, as well as the basic biology of the SARS-CoV-2 virus itself,” says Richard P. Lifton, the university’s president. “Rockefeller was founded on the premise that the surest route to disease prevention and cure is through rigorous basic science; we have a particularly distinguished history in tackling infectious diseases. Our scientists have advanced bold ideas to influence the course of this pandemic, and are working tirelessly to develop them.”

One strategy being aggressively pursued is the use antibodies from the plasma of patients who have recovered from COVID-19. A rapid application of this approach is to simply collect the blood plasma from recovered patients and administer it to sick and vulnerable people. Studies on such treatments have already been announced by New York Governor Andrew Cuomo and have received emergency approval from the FDA. Rockefeller scientists, along with collaborators from local and national biomedical research centers and the New York Blood Center, are recruiting healthy volunteers who have recovered from COVID-19 in order to extract and process the plasma.

To increase the efficacy of the convalescent plasma treatment, Paul Bieniasz and Theodora Hatziioannou are developing a rapid, simplified and safe method to identify samples that contain the most effective antibodies against the virus.

A definitive version of this approach, led by immunologist Michel C. Nussenzweig, is to purify from recovered patients’ blood the specific immune cells that make antibodies protective against SARS-CoV-2. This allows characterization of the individual antibodies and may suggest which combinations are most effective in preventing or stopping viral infection. The most potent antibodies can then be made in large quantity in pure form and administered to patients, providing passive immunity. Nussenzweig’s approach is a variation on the technique he pioneered for therapy and prevention of HIV that has shown dramatic efficacy in phase II clinical trials. Nussenzweig is currently recruiting healthy volunteers who have recovered from COVID-19 to donate blood samples.

The antibodies can be further optimized. Best known for their ability to latch on to pathogens using their front end, antibodies also have a back end, the so-called Fc region, that binds to immune cells in ways that can promote or inhibit the immune response. Immunologist Jeffrey V. Ravetch, who discovered these different roles for Fc, is now studying COVID-19 patients’ antibodies to ensure that Fc variants that are used in the clinic elicit a beneficial, and not inhibitory, immune response.

“With the growing number of recovered patients in New York, and elsewhere, the coming weeks present an enormous opportunity to collect donor samples for the development of immune therapies,” Lifton says.

In less than 20 years, three coronaviruses—SARS, MERS, and now SARS-CoV-2—have jumped from animals to humans causing severe and widespread suffering and economic damage. There are many more coronavirus variants in nature, and each require the immune system to generate highly specifically sculpted antibodies to recognize them. To develop a universal approach to prevent infection by not just SARS-CoV-2 but by the many other coronaviruses, Bieniasz and Hatziioannou are working on a more universal protein therapeutic: one that carries the viral binding domain of ACE2, the receptor used by all three of these pandemic coronaviruses and many others. If successful, this decoy receptor would bind the virus regardless of the specific viral variant, enabling immune cells to swiftly capture and destroy them. The researchers hope such a universal anti-coronavirus protein will be ready for testing within months.

Another innovative approach to arresting the coronavirus may be decrowning it: The SARS-CoV-2 uses the crown-like spikes on its surface to enter host cells. Structural biologist Michael P. Rout and biochemist Brian T. Chait theorize that nanobodies, a novel class of very small antibody-like molecules found in the blood of camels and related species, might be able to prevent these spikes from penetrating the cell membrane. Because of their small size and stability, nanobodies can be manufactured at low cost, and could potentially be useful in a rapid point-of-care diagnostic or as a therapeutic, potentially as an inhaled drug.

Understanding the course of infection, improving testing, and identifying those with acquired immunity

A puzzling aspect of SARS-CoV-2 is its apparently varied incubation period. For some people, the symptoms appear four to seven days after exposure, whereas others remain asymptomatic for much longer. Thomas P. Sakmar is developing a database called “CoronaCal” to document patients’ clinical data over the course of their illnesses, including by tracking the amount of viral RNA in oropharyngeal samples collected daily. These studies will provide critical information about how the infection begins and propagates through the population.

A major clinical issue has been the delays in testing for SARS-CoV-2 infection. Robert Darnell, an expert in RNA protein regulation, is working on new methods to rapidly diagnose infection from samples collected at home. Such an advance would lower technical and logistical barriers that have complicated our ability to identify who is infected, a requirement for tracing and containing the virus.

Another public health issue concerns re-infection; since many people who are exposed to the coronavirus fight it off with only mild symptoms or none at all, it’s not clear if or when people develop immunity, or for how long post-infection immunity lasts. Biochemist Thomas Tuschl is working to develop a blood-drop test to determine who in the population has been exposed to SARS-CoV-2 and who has protective antibodies—information that will be crucial to informed decision-making about which individuals can safely return to work.

Repurposing existing drugs is one of the fastest strategies to explore when confronted with a new disease. With COVID-19, too, there is much discussion around the efficacy of existing drugs to fight the disease, with little hard data. Charles M. Rice and Fraser Glickman are screening a large collection of registered drugs from around the world for compounds that may inhibit SARS-CoV-2, using methods Rice originally developed to study replication of the hepatitis C virus—work that led to curative drugs. Meanwhile, Alexander Tarakhovsky is studying the viral protein responsible for the death of cells infected by SARS-CoV-2, which could identify drugs that would prevent the tissue damage that is the hallmark of the pneumonia of COVID-19.

Additional efforts to identify novel drugs are underway in the labs of Sean F. Brady and Tarun Kapoor, who are using innovative biochemistry to search for inhibitors of enzymes the virus needs to replicate. Brady theorizes that many bacteria may normally make such inhibitors to protect themselves from viral invaders. He has pioneered the identification of bacterial metabolites with novel anti-infective properties, and candidates for inhibitors of the essential SARS-CoV-2 RNA polymerase are among them. Kapoor is investigating novel inhibitors of another enzyme, called helicase, that is required for viral replication. Their findings could provide new leads for inhibitory drugs that can be tested in Rice’s screening assays. Meanwhile, structural biologists Seth A. Darst and Elizabeth Campbell, along with Chait are studying the atomic-level interactions between existing inhibitors and their target enzymes, knowledge that could help in the design of novel drugs.

Another path to stopping the propagation of the virus is to target proteases, enzymes that process the proteins translated from the viral RNA. Michael O’Donnell and his colleagues are examining two SARS-CoV-2 proteases for vulnerabilities to compounds that inhibit similar proteases in other viruses, including HIV and SARS/MERS—and developing high-throughput screening assays to identify additional compounds that may inhibit SARS-CoV-2 proteases.

For pre-clinical testing of potential drugs, immunologist Gabriel D. Victora is using CRISPR technology to develop an improved mouse model with a human version of the ACE2, the cell surface receptor that the SARS-CoV-2 virus uses to enters the cells. Such a model will be critical to move promising compounds into in vivo testing.

Although COVID-19 has been especially dangerous to older individuals and those with underlying conditions, surprisingly, some young, otherwise healthy people develop severe disease, while some highly exposed individuals remain free from infection. Rockefeller’s Jean-Laurent Casanova is the world leader in identifying gene mutations responsible for extreme variations in infectious disease outcomes. This research can identify human genes that are essential for resisting viral infection or whose mutation prevents the virus from replicating, acting both in cells that are directly infected by the virus, and in cells of the immune system that kill infected cells. Casanova is leading an international study to sequence the genomes of many COVID-19 outliers, resulting in information that could help doctors identify those at high-risk. The work may also identify new approaches to therapy based on the human genes that account for extreme outcomes.

Rice is taking a parallel approach to this problem using CRISPR technology to systematically knock out human genes to identify those whose loss prevents viral infection. These studies may identify novel therapeutic targets.

In an approach complementary to Rice’s and Casanova’s, Erich D. Jarvis and his colleagues are focusing specifically on ACE2, the receptor used by coronavirus to infect host cells. The receptor is present in many animals, but only some are susceptible to the virus. Jarvis’s team is sequencing the genomes of various species to identify structural differences in the ACE2 receptor that might explain differences in susceptibility.