Will SARS-CoV-2 escape future drugs by mutating? The answer may be a nuanced “no.” 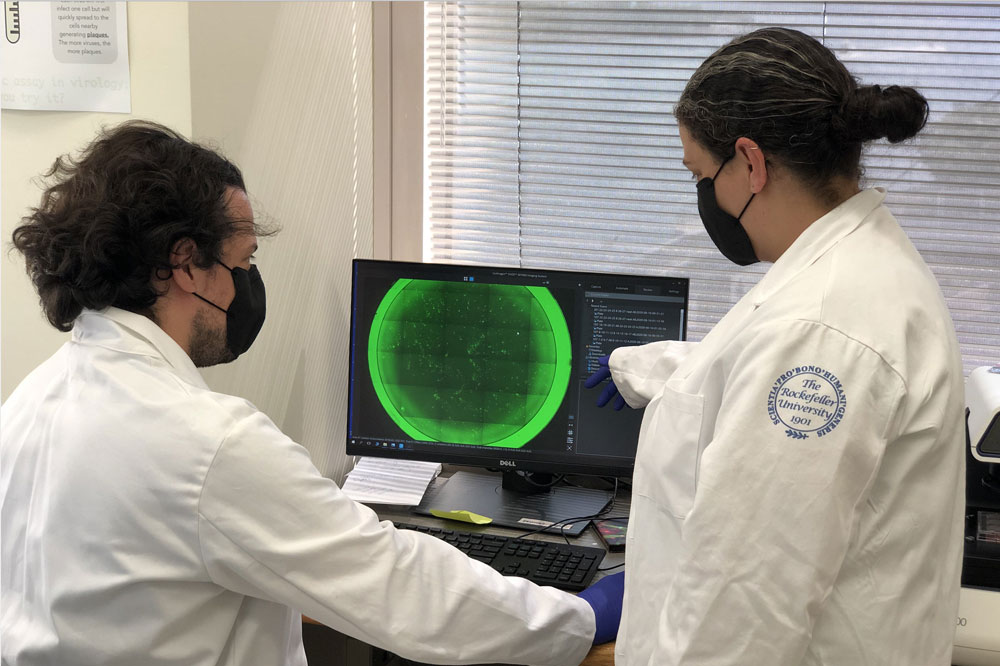 Almost as quickly as SARS-CoV-2 turned the world on its head, the spike protein studding its surface became a molecular celebrity. It is the virus’s key to our cells, hence a critical target: Many promising treatments and vaccines aim to unleash antibodies that find and obstruct the spike.

But like any other virus, the coronavirus mutates as it propagates, which has raised worrying questions: What if a mutation comes along changes the shape of the spike, rendering it is unrecognizable to antibody-based therapeutics but still capable of prying our cells open?

Recent experiments by Rockefeller scientists suggest this is indeed a possibility, while also delivering some good news. Their findings show the virus’s talent as an escape artist is limited, and could be undercut with drugs that combine several types of antibodies.

“Figuring out the patterns of antibody resistance that may arise can help us stay one step ahead of the virus when designing treatments,” says Paul Bieniasz, head of the Laboratory of Retrovirology. The findings are available online on preprint service bioRxiv ahead of publication in a peer-reviewed scientific journal.

Escape once, but not twice

Bieniasz’s team, in collaboration with the labs of Michel C. Nussenzweig and Charles M. Rice, is developing so-called monoclonal antibody treatments in which a potent antibody is identified and mass-produced to be used as medication for COVID-19. To better understand if such interventions will remain effective over time, they examined viral mutation patterns using a stand-in for the coronavirus: a vesicular stomatitis virus tweaked to express SARS-CoV-2 spike protein on its surface.

The team first let these faux coronaviruses replicate freely and pick up mutations as they make mistakes copying themselves. They then subjected the viruses to different types of highly potent spike-targeting antibodies, before pouring them all into a dish containing human cells.

As expected, most of the viruses were neutralized by the antibody, but a fraction survived and were able to infect cells. The genetic sequence of these escapees revealed slight modifications in the spike protein, “the very types of mutations that could potentially make the virus resistant to these antibodies,” says Theodora Hatziioannou, a research associate professor at Rockefeller.

This problem can be mitigated, however, by using a cocktail of two antibodies. In these experiments, mutated viruses that escaped one type of antibody were wiped out by a second one targeting a different place of the spike protein.

There is also the question of whether mutations in the spike protein could limit the success of a future vaccine. The researchers found that spike variants with resistance to some antibodies are already circulating in the population, although at very low frequency. Moreover, when the researchers repeated the experiment with plasma from four COVID-19 patients, which contains a population of naturally occurring antibodies, resistant mutants emerged in one of the samples.

This could potentially mean that the virus could escape the natural antibodies that some vaccines in development aim to produce—but most likely, that risk will depend on just what type of antibody response a vaccine elicits and how it varies among people.

“To know more, we will need to examine many more plasma samples both from people who have had COVID-19 and from vaccinated people, and develop a more complete picture of the diversity of antibodies and their effect on the virus,” Hatziioannou says.