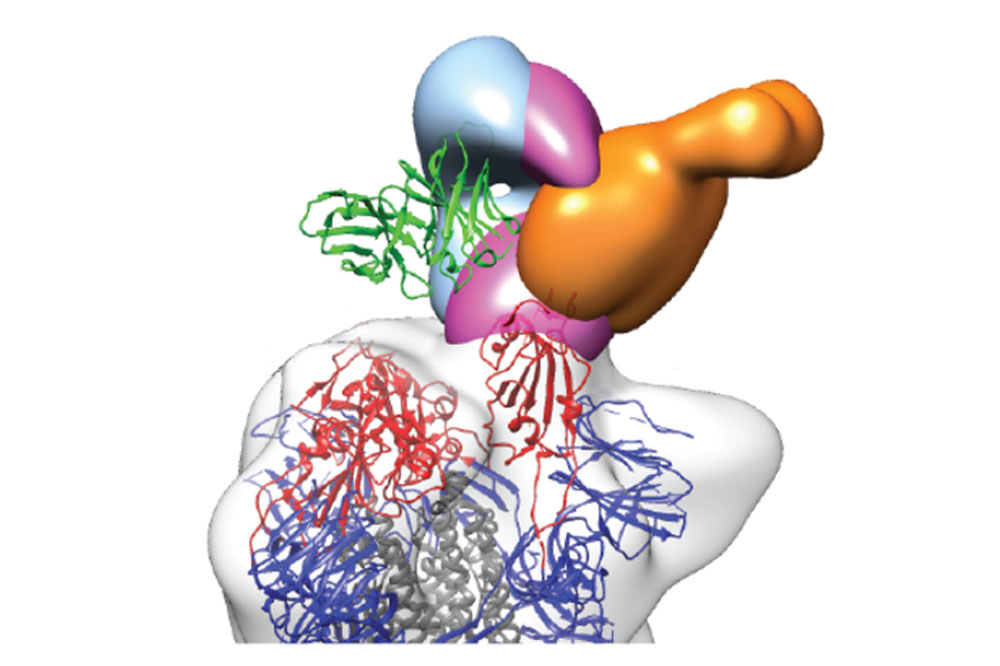 Three neutralizing antibodies (in blue, purple and orange) bound to the protein that gives SARS-CoV-2 access to our cells. Image courtesy of Christopher O. Barnes and Pamela J. Bjorkman, California Institute of Technology.

A study of 149 people who have recovered from COVID-19 shows that although the amount of antibodies they generated varies widely, most individuals had generated at least some that were intrinsically capable of neutralizing the SARS-CoV-2 virus. The findings are published June 18 in the journal Nature.

Antibodies vary widely in their efficacy. While many may latch on to the virus, only some are truly “neutralizing,” meaning that they actually block the virus from entering the cells.

Since April 1, a team of immunologists, medical scientists, and virologists, has been collecting blood samples from volunteers who have recovered from COVID-19. The majority of the samples they have studied showed poor to modest “neutralizing activity,” indicating a weak antibody response. However, a closer look revealed everyone’s immune system is capable of generating effective antibodies—just not necessarily enough of them. Even when neutralizing antibodies were not present in an individual’s serum in large quantities, researchers could find some rare immune cells that make them.

“This suggests just about everybody can do this, which is very good news for vaccines,” says Michel C. Nussenzweig, head of the Laboratory of Molecular Immunology at Rockefeller. “It means if you were able to create a vaccine that elicits these particular antibodies, then the vaccine is likely to be effective and work for a lot of people.”

Moreover, the researchers identified three distinct antibodies that were shown to be the most potent of the bunch in neutralizing the virus. They are working to develop them further into therapeutic and preventive drugs.

From the beginning of April and over 5 weeks, 149 people who had recovered from COVID-19 visited The Rockefeller Hospital to donate plasma, the portion of the blood that contains the antibodies, and the immune B-cells that produce them. The participants had experienced symptoms for an average of 12 days, and had their first symptoms on average 39 days before plasma donation.

Bieniasz and Hatziioannou’s team used an assay they had developed to test the neutralizing activity of the plasma samples. This involved mixing the plasma with a pseudo SARS-CoV-2 virus and measuring how well this mixture could still infect human cells in a dish.

In 33 percent of donors, the neutralizing activity of plasma was below detectable levels. It’s possible that for many in this group, their immune system’s first line of defense had resolved the infection quickly, before the antibody-producing cells were called in.

The majority of the plasma samples showed poor to modest neutralizing activity. And for 1 percent of donors it was remarkably high. “Like in other diseases, everyone responds differently,” says Robbiani, research associate professor at Laboratory of Molecular Immunology. “Some people have poor response, some average. And then there is a fraction of people that are exceptional responders.”

Those “elite” responders are crucial to the team’s plans. The high numbers of neutralizing antibodies in their serum makes it possible for researcher to catch the rare B cells that make them. They can then clone the antibodies from those cells, and use them to emulate the same strong defense in other people.

Out of the numerous antibodies generated by elite responders who had the best performing plasma, the team identified 40 that neutralized the virus, and zeroed in on three that could do so even at very low concentrations. The team has cloned these most potent antibodies and is now working to develop them for clinical use.

Neutralizing antibodies found in this study bind to at least three distinct sites on the receptor-binding domain (RBD) subunit of the spike protein, which is what SARS-CoV-2 uses to gain entry to host cells. A second look at the low-performing plasma samples revealed they also contained these RBD-binding antibodies, albeit in small quantities.

“We now know what an effective antibody looks like and we have found similar ones in more than one person,” Robbiani says. “This is important information for people who are designing and testing vaccines. If they see their vaccine can elicit these antibodies, they know they are on the right track.”