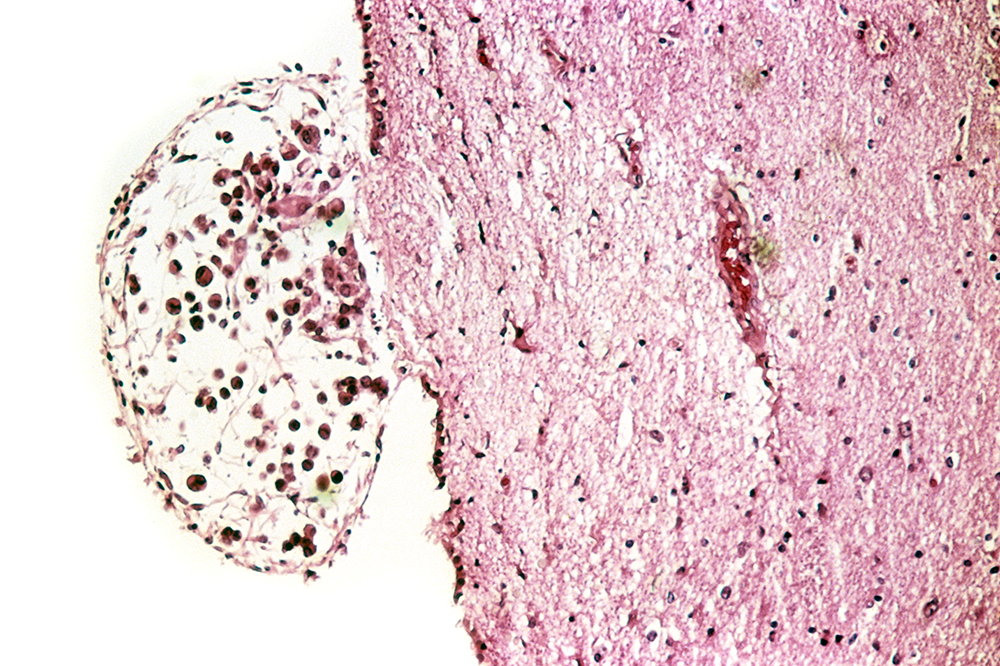 The scientists recommend that people with advanced-stage fibrolamellar hepatocellular carcinoma, which mostly affects teenagers and young adults, receive regular neuroimaging scans because of the tumor’s apparent ability to metastasize to the brain. Solid tumors, including those in the liver, don’t usually spread to the brain, so scans to monitor fibrolamellar patients’ progress typically don’t include the head.

Earlier detection of brain metastases could increase the chances of successful surgical removal of the tumors, says Sanford Simon, whose Laboratory of Cellular Biophysics previously identified the genetic driver behind fibrolamellar. It also could help clinicians to make more informed choices about what drugs to use.

Only a minority of fibrolamellar patients will develop brain metastases, Simon expects. Still, testing for that possibility is important when a tumor’s spread can have such severe consequences. About 200 cases of fibrolamellar are reported worldwide each year, though Simon believes the disease is underdiagnosed. Only about one in three patients survive beyond five years.

In a paper published recently in the journal Pediatric Blood & Cancer, he and colleagues document three cases in which fibrolamellar patients, all 18-year-old women, were found to have developed brain tumors. Cranial scans were performed only after the patients developed symptoms including severe headaches and changes in mental status. The tumors had also metastasized to the lungs of the three patients, one of whom had died when the paper was published.

Metastasis is common with fibrolamellar, partly because the disease isn’t usually detected until it is at an advanced stage. Early symptoms, such as abdominal pain, could have many causes, and doctors may first check adolescent patients for issues such as stress or lactose intolerance.

Simon suggests that clinicians perform an ultrasound when teens complain about abdominal pain over an extended period, at least to rule out cancer.

The finding that fibrolamellar can spread to the brain doesn’t immediately add to scientists’ understanding of the biology of the disease, Simon says, but is nevertheless significant as it may offer immediate ways to improve treatment. Meanwhile, his team is working to develop a cure for fibrolamellar that acts by directly targeting the genetic driver of the disease. In other investigations, they are seeking to identify biomarkers in the blood that could lead to earlier detection of fibrolamellar and better tracking of patients’ progress after tumors are surgically removed.

Another way Simon and his colleagues are trying to help patients more immediately is through extensive testing of existing drug compounds that have already been assessed for human safety. This could yield more effective chemotherapies for fibrolamellar in the near future, he says.

Human cells can be coaxed into preventing certain enveloped viruses (including HIV, Ebola, and parainfluenza) from escaping their membranes in the lab, a finding that could lead to novel treatments for many viral diseases.

The proteins of the nuclear pore complex flip-flop rapidly between two orientations as they let cargo through.