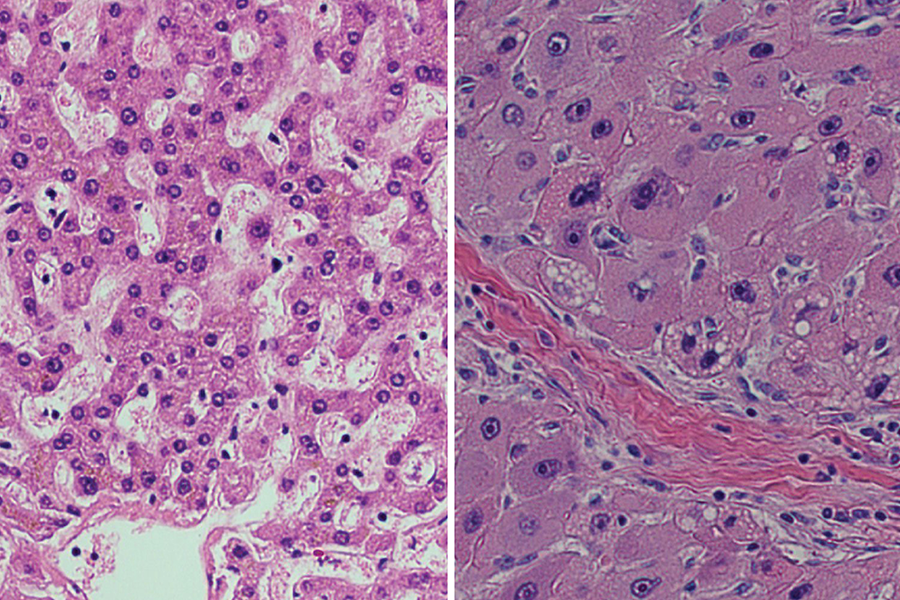 Cross-section of a normal human liver (left) and one affected by fibrolamellar carcinoma.

After years of rigorous research, a team of scientists has identified the genetic engine that drives a rare form of liver cancer. The findings offer prime targets for drugs to treat the usually lethal disease, fibrolamellar hepatocellular carcinoma (FL-HCC), which mainly strikes adolescents and young adults.

Sanford Simon, who conducted the research as head of The Rockefeller University’s Laboratory of Cellular Biophysics, describes the culprit as a “chimeric gene,” a mutation created when two genes fuse together. These genes normally sit far apart from each other, separated by some 400,000 base pairs, the building blocks of DNA that combine to form genes.

The chimeric gene, which Simon’s lab first characterized three years ago, has been found in each of the hundreds of FL-HCC patients tested for the mutation.

Having confirmed the chimeric gene as a hallmark of the disease, Simon set out to explore if and how it may cause these malignant tumors. He worked with Scott Lowe, a cancer geneticist at the Memorial Sloan Kettering Cancer Center, to develop a mouse model of FL-HCC.

In work published this week in Proceedings of the National Academy of Sciences, the scientists used CRISPR gene editing, a highly precise tool for manipulating DNA, to generate mice that carry the 400,000 base-pair deletion and produce the chimeric gene. Edward Kastenhuber, a graduate student in Lowe’s lab, found that these mice develop liver tumors that mimic the biology of the tumors found in humans with FL-HCC, suggesting that the deletion is in itself sufficient to cause the cancer—other alterations are not necessary for tumors to grow.

However, this experiment left open the question of precisely how the deletion spurs cancer: by eliminating genes that normally would suppress the growth of tumors, or by introducing the chimeric gene. Another experiment, in which mice with the fused gene but no deletion in the genome developed tumors, proved that it’s the mutation, not the missing DNA as such, that causes the disease.

With the chimeric gene firmly established as the driver of the disease, and its cellular mechanisms defined, Simon and his team—including Gadi Lalazar, of Rockefeller’s Clinical Scholars Program, and graduate student David Requena—are now working to identify potential targets for drugs to treat the disease.

Among these drug targets is a protein produced from the fused gene that belongs to a family of enzymes called kinases. These enzymes are often mutated in cancers. “In fact,” Simon explains, “some of the most successful cancer therapies available, including Gleevec, act by targeting specific kinases.”

The researchers showed that disruption of the fused gene’s kinase activity impaired the formation of tumors in mice—a finding that has strengthened their confidence that agents aimed at targeting this activity or its consequences might be effective against FL-HCC.

The team is also studying the effects of targeting a number of cellular signaling systems that have previously been implicated in other cancers, and that speed tumor growth when they become overactive in FL-HCC patients. And they will be using their new mouse model as a system to test the effectiveness of new therapies prior to initiating clinical trials in patients.

Simon first became interested in FL-HCC nine years ago, when his 12-year-old daughter Elana was diagnosed with the disease. (Now 21, Elana is a senior at Harvard, and a lead author on earlier reports characterizing the genomics of the disease.) He continues to embrace the challenge the cancer presents and attributes the latest breakthroughs to an “incredible perfect storm” of advances in all of the sciences, thanks to decades of public investment in basic research.

A new report details three cases of secondary brain tumors in people with fibrolamellar hepatocellular carcinoma. The researchers say imaging tests could improve treatment for patients whose cancer spreads to the brain from the liver.

Intellectual property on pediatric cancer is dedicated to the public

Intellectual property resulting from the discovery of specific DNA mutations linked to a rare and often deadly type of adolescent liver cancer, fibrolamellar hepatocellular carcinoma, has been dedicated to the public by the institutions that made the discovery, The Rockefeller University (“Rockefeller”) and the New York Genome Center (“NYGC”). The…...

This research received funding from the Starr Cancer Consortium.