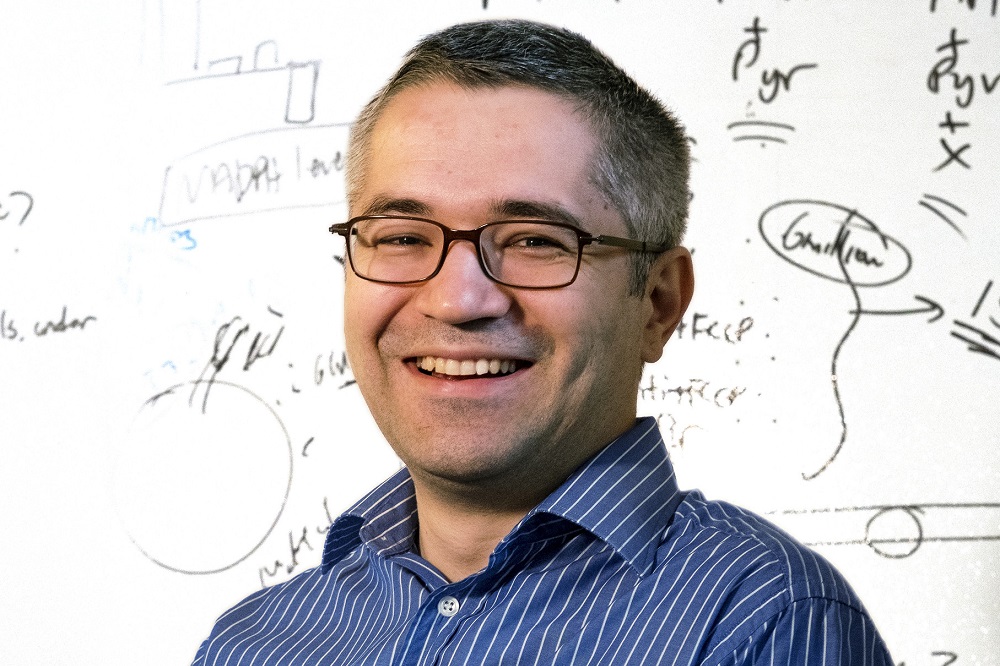 A cancer cell must eat. While radiation may burn it, chemo may choke it, and surgery may pluck it out altogether, starving a tumor to death holds particular appeal as a kinder, gentler form of treatment. But depriving a tumor’s nutrient supply wholesale will also deprive its healthy neighbors. To avoid collateral damage, scientists must identify the rare ingredients that tumor cells need and that normal cells can do without.

Kivanç Birsoy focuses on this very problem. A leader in the field of cancer cell metabolism, Birsoy earned his PhD from Rockefeller in 2009 and returned as an assistant professor in 2015. Since then, he has highlighted aspartate as a crucial nutrient that keeps a variety of cancer cells sated and discovered that one rare lymphoma subsists on a diet of cholesterol that chemo could cut out. Birsoy is also chipping away at the mysterious connection between cellular metabolism and a number of debilitating mitochondrial diseases and rare genetic disorders.

On March 9, Birsoy was promoted to Chapman Perelman Associate Professor, a recognition of his innovative and highly productive research program. He remains head of the Laboratory of Metabolic Regulation and Genetics.

“Kivanç and his lab members have pioneered the coupling of innovative genomic tools with highly original studies to discover how cancer cells rewire their metabolism to adapt to the harsh environments they grow in,” says Richard P. Lifton, Rockefeller’s president. “Their findings are identifying unanticipated vulnerabilities to cancer cell survival that may be exploited for new therapeutics.”

Birsoy first became interested in cancer cell metabolism as a postdoctoral fellow at the Whitehead Institute for Biomedical Research. There he designed an instrument to test how cells respond to low-nutrient, low-oxygen environments, like those found in the depths of a cancerous mass, and observed how normal cells wither under stress, while tumor cells find ways to survive.

Birsoy’s search for metabolic liabilities—the specific amino acids and other nutrients that cancer cells rely upon to survive in challenging environments—has been underway for the past six years. One of his earliest observations was that, while most cells use oxygen to produce the amino acid aspartate, cells that thrive within hypoxic tumors must instead scavenge aspartate from their environments. Cancer cells too oxygen-deprived to make aspartate on their own, and incapable of importing the amino acid through other means, invariably die.

Later, Birsoy discovered another key metabolic liability in to ALK-positive ALCL, a lymphoma that mainly affects children. After observing that cells associated with this cancer could not survive in environments devoid of cholesterol, Birsoy confirmed that the cells lack an enzyme crucial for cholesterol synthesis. Since they cannot make cholesterol on their own, he concluded, ALK-positive ALCL cells must import it from the environment. Which means that ALCL patients, particularly those with cancers resistant to conventional chemotherapy, could benefit from drugs that block cholesterol uptake.

Before Birsoy, cancer researchers hadn’t made significant headway in identifying metabolic liabilities since 1953, when scientists fortuitously found that acute lymphoblastic leukemia cells rely upon asparagine. This early victory in the field gave rise to a drug that depletes asparagine with an enzyme—effectively the first chemotherapy to fight cancer by starving it.

But this cancer treatment strategy never really took off, largely because the tools of the mid-20th century were not up to the challenge of systematically searching for more metabolic liabilities. And by the time the technology caught up, scientists had turned their attention to hunting for cancer genes. Birsoy stands at the forefront of a new movement within cancer research, revisiting questions at the core of cell metabolism with novel technology and renewed resolve.

“Modern genetic tools give us a fresh and unbiased view on which pathways matter the most for a cancer cell to grow, metastasize, or evade the immune system,” Birsoy says.

His work might not only inform the development of new cancer drugs, but also have implications for research into metabolic disorders. For example, Birsoy is interested in how mitochondrial dysfunction warps normal cellular metabolism, leading to a variety of poorly understood conditions. The lab is paying close attention to a family of rare genetic disorders characterized by the runaway production and deadly accumulation of metabolites that suffocate vital organs.

And, in a broader sense, the lab’s work is changing our understanding of biology itself. For example, their recent work describing how mitochondria import antioxidants is among the first to examine oxidative stress at its source and could potentially inform the field decades to come.

“In addition to the clinical relevance of our work, studying cellular metabolism also enables us to discover many unknowns of biochemical pathways,” Birsoy says. “Going forward, we will focus on mitochondrial metabolism. Mitochondria, though known as the powerhouse organelles, are important contributors to tumor formation. I believe our recent discovery of the mitochondrial antioxidant transporter is going to be very relevant for many cancer-related processes, too.”

The finding offers researchers a direct way to investigate oxidative stress and its damaging effects in aging, cancer and other diseases.

Richard P. Lifton to be honored with 2023 Kober Medal

Lifton, who pioneered the use of genomics to identify the basis for diseases, is recognized for a lifetime of contributions in science and mentorship.