A new tactic for starving tumors 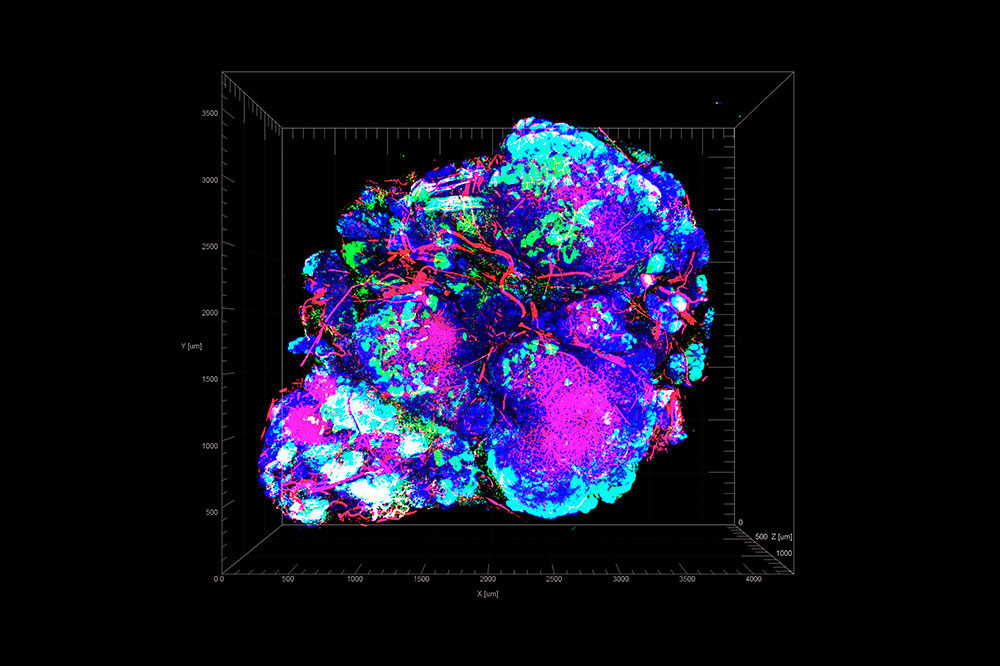 A tumor’s goal is simple: to grow, grow, grow, by making more cancer cells. But that often means growing so fast that the oxygen supply gets scarce, at which point cells within the tumor start to suffocate. Without oxygen, these ever-dividing cells struggle to make enough aspartate, a crucial ingredient in many cellular processes.

That’s the scenario worked out by the research group of Kivanç Birsoy, head of the Laboratory of Metabolic Regulation and Genetics at The Rockefeller University. It suggests that tumors in oxygen-starved tissues have an Achilles’ heel—their already-undercut production of aspartate—that doctors could target with drugs. The researchers report their work in Nature Cell Biology this week.

Suffocation in a Petri dish

Scientists already knew that when certain tumors have outgrown their blood supply, they grow slowly under low-oxygen conditions. But it wasn’t understood exactly why this happens. The oxygen molecule participates in a vast number of a cell’s chemical reactions, any of which could be limiting its growth.

To zero in on the most important reactions, Javier Garcia-Bermudez, a postdoctoral associate in Birsoy’s group, mimicked oxygen deprivation in cancer cells harvested from 28 patients—including cancers from blood, stomach, breast, colon and lung—that he cultured in the lab. Many of these cells exhibited stunted growth under low-oxygen-like conditions, but others were less sensitive, and some weren’t bothered at all by the treatment.

In comparing these cells’ production of chemicals, or metabolites, Garcia-Bermudez noticed that the most sensitive ones lost the amino acid aspartate under oxygen deprivation. Cells can’t make aspartate without oxygen, but it seemed as if the resistant cells were able to obtain it from their environment.

In the sensitive cells, a lack of aspartate would affect not only the production of new proteins, but also several other processes that rely on aspartate, such as the synthesis of genetic material.

Birsoy says he was surprised to see that so much of the oxygen-deprivation problem came down to this one amino acid. He had expected many more metabolites would depend on oxygen supply.

Hitting tumors where it hurts

The researchers found there was something special about many of the cancers that resisted oxygen deprivation: they turned on a gene called SLC1A3 to suck up aspartate from their surroundings.

When Garcia-Bermudez turned on this gene in the lab-grown cancers that were normally sensitive to low oxygen, they grew faster.

The same was true when he transplanted the tumors into mice, providing further support for the idea that aspartate can be a limiting factor for tumor growth when oxygen is scarce. “This is something they’re really starving for,” says Birsoy.

The discovery might offer opportunities for creating drugs to stab cancers in this particular Achilles’ heel, making them even hungrier for aspartate. There might be several ways to prevent cancer cells from getting aspartate, Birsoy suspects, by blocking their methods to make the amino acid or take it up from their surroundings.

If he is right, an anti-aspartate treatment might one day provide a supplement to typical chemotherapy and radiation, and it could potentially be effective for any type of tumor containing oxygen-starved areas. Those parts of tumors tend to resist typical chemo and radiation, Birsoy adds.

He envisions a sort of one-two punch: One treatment for the parts of a tumor that are well-supplied with oxygen, and an aspartate blocker for the rest.

That sort of drug combo is a long ways off, however. For starters, Birsoy now plans to investigate possible drugs that would interfere with aspartate production in the lab.