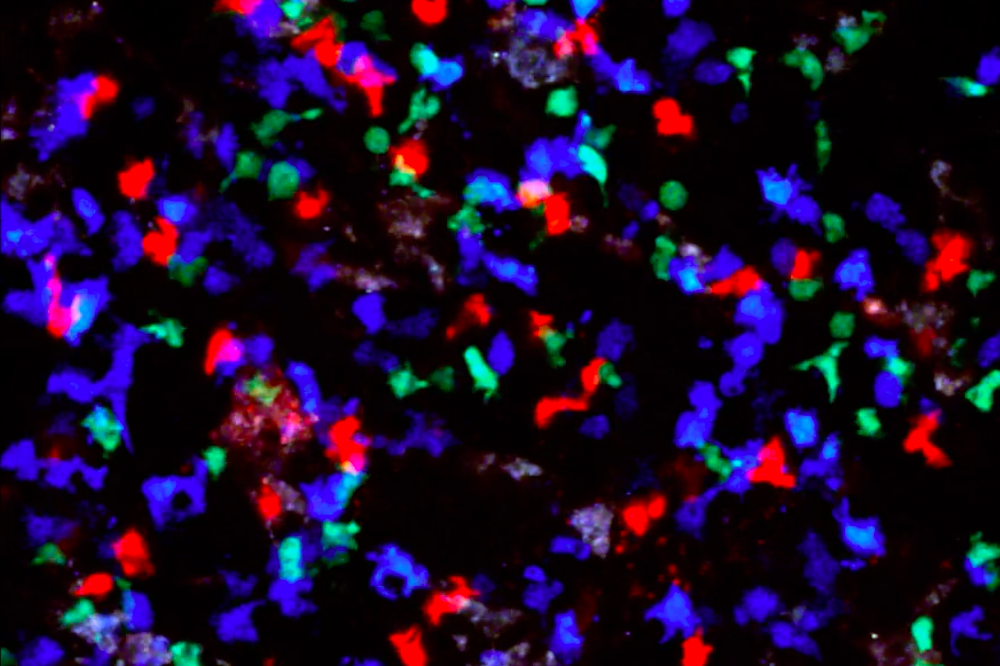 When we are exposed to a pathogen, the immune system’s B cells swarm to our lymph nodes, spleens, and tonsils. There, those cells mutate in germinal centers—microscopic boot camps that rush the B cells through volleys of mutations to produce the most potent antibodies for neutralizing the infectious agent. As long as a germinal center is up and running, B cells are free to mature and perfect their approach to fighting disease. But when a germinal center shuts down, usually after a few weeks, the training process grinds to a halt. Whatever antibodies happen to have formed by then are, for better or worse, the immune system’s final product.

Now, a new study in Science describes one of the key elements involved in shutting down germinal centers. The findings may ultimately help scientists extend or cut short the length of time that germinal centers are active, with potential clinical implications.

“If we can make germinal centers last longer, maybe we can help the body form stronger antibodies in response to vaccines,” says Gabriel D. Victora, head of the Laboratory of Lymphocyte Dynamics at The Rockefeller University. “On the flipside, if we know how to shut down a germinal center, that may help treat autoimmune diseases which are caused by excessive immune responses.”

A tale of two T cells

While B cells are the stars of any immune response, a supporting cast of T cells plays a crucial role within germinal centers. Helper T cells feed information to B cells and encourage their growth, while regulatory T cells suppress the entire process. “Helper and regulatory T cells are the gas and brakes of the immune response, respectively,” Victora says.

Scientists have long known that T cells play a role in the suppression of the immune system at large but, until now, their specific impact on the dissolution of individual germinal centers remained a mystery. “We know a lot about why germinal centers form, but almost nothing about why they collapse,” Victora says.

In order to further explore the factors that lead to germinal center dissolution, Victora and his team began exploring a protein called Foxp3, which is vitally important for the function of regulatory T cells. By tagging Foxp3 green and germinal centers blue, the researchers were able to zoom in on individual germinal centers in mice and track each B cell bootcamp from its formation until its demise.

“We are able to see how the number of T cells carrying the green Foxp3 protein increases right before the blue germinal center begins to shrink,” says Johanne Jacobsen, a research associate in Victora’s lab.

Upon closer examination, the scientists realized that the rising Foxp3 heralding the end of a germinal center’s life was not coming from the regulatory T cells. Instead, the helper T cells themselves had begun expressing Foxp3—former gas pedals suddenly slamming the brakes, helpful promoters transforming into regulators just before the collapse of the germinal center.

“We were seeing the helpers turn into regulators,” Jacobsen says.

The findings are the first to highlight helper T cells as principal agents of germinal center shutdown, and they raise the possibility that interfering with these cells specifically may allow scientists to tamper with the length of time that a germinal center is up and running.

Extending the lives of our germinal centers after we receive a vaccine, for instance, may help coax our immune systems into making stronger antibodies. On the other hand, shutting down germinal centers may help treat autoimmune diseases—preventing the body from developing very strong antibodies that are potent enough target its own cells and do real damage.

But in the immediate future, the Victora lab will focus upon clarifying the roles of helper T cells and investigating whether additional factors contribute to a germinal center’s demise. T cells are unlikely to be the sole “off switches” for germinal centers, and Victora suspects that we are yet in the early stages of uncovering the complexities of how our body’s B cell bootcamps function. “We have identified just one factor involved in shutting down germinal centers,” Victora says.

“There may be many more.”