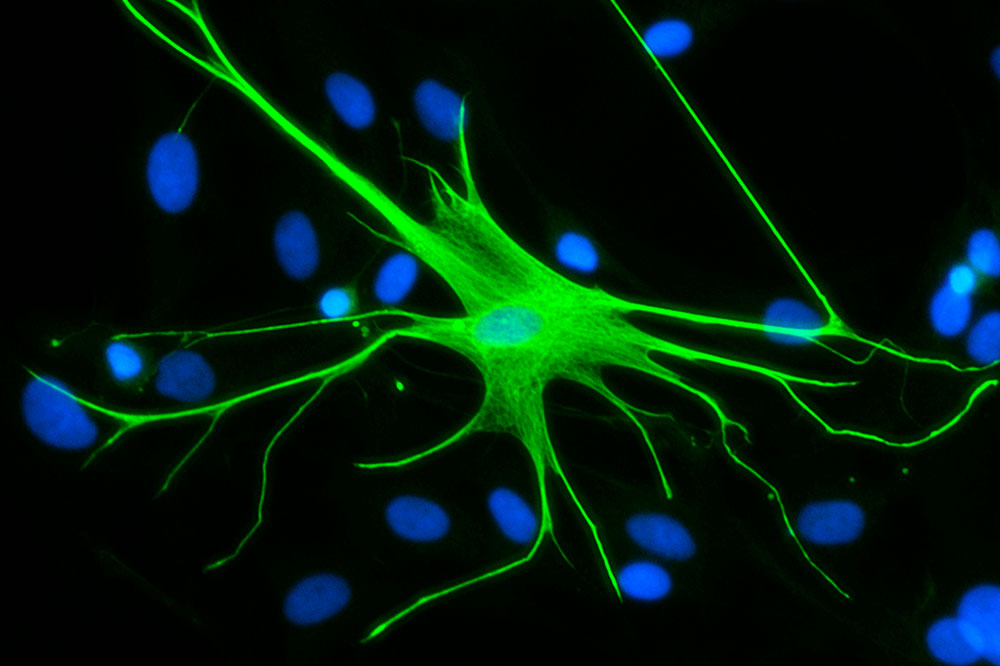 Human astrocytes are important for brain signaling. Researchers are gaining new insights into their function by studying their worm equivalent.

Repetition can be useful if you’re trying to memorize a poem, master a guitar riff, or just cultivate good habits. When this kind of behavior becomes compulsive, however, it can get in the way of normal life—an impediment sometimes observed in psychiatric illnesses like Tourette’s syndrome and autism spectrum disorders. Now, Rockefeller scientists have identified a brain circuit that underlies repetition in worms, a finding that may ultimately shed light on similar behavior in humans.

Studying the microscopic roundworm C. elegans, the researchers found that defects in one protein cause animals to reorient themselves over and over again. Described in Nature Communications, these observations are bolstered by previous research in mice, and suggest that similar mechanisms may drive repetitive behavior in a range of animals, including humans.

The scientists initially set out to understand how astrocytes, star-shaped cells found in mammalian brains, help neurons do their job. Astrocytes are thought to be responsible for, among other things, disposing of excess neurochemicals at synapses, the connections between neurons. This task is vital because if chemicals are not removed in a timely fashion, they can stimulate neurons in unexpected ways, disrupting normal brain function. To better understand this process, Menachem Katz, a research associate in the lab of Shai Shaham, looked to C. elegans CEPsh glial cells, which he suspected to be the worm equivalents of astrocytes.

Confirming this suspicion, Katz, Shaham, and their colleagues, used mRNA sequencing to show that mouse astrocytes and CEPsh glia have similar genetic signatures. Among other commonalities, both cell types produce the protein GLT-1, the mammalian version of which is responsible for clearing the chemical glutamate away from synapses. This finding, says Shaham, afforded the researchers a unique opportunity to define how astrocytes and GLT-1 work.

“Scientists have been trying to understand the functions of astrocytes for many years, and in mammals it’s not easy because these cells are essential for keeping neurons alive,” he says. “But in C. elegans there are only four CEPsh glial cells, and they are not required for neuron survival. This allowed us to investigate the specific roles of glutamate transporters, without worrying about the side effects of neuron sickness.”

To do so, the researchers created C. elegans lacking GLT-1. Surprisingly, this depletion did not result in glutamate accumulation at synapses, as was expected. Instead, the worms exhibited oscillations in synaptic glutamate levels—and a peculiar behavioral defect.

It’s perfectly normal for C. elegans to change course every now and then. Typically, the worm reorients itself about once every 90 seconds. But worms lacking GLT-1, the researchers found, took this action to the extreme: at 90 second intervals the animals executed not one reversal, but bursts of them. “It’s as if once they start the action, they can’t stop repeating it,” says Katz.

Further experiments revealed that removal of the glutamate receptor MGL-2 blocked both repetitive reversals and synaptic glutamate oscillations. The researchers concluded that when glutamate is not efficiently cleared, the chemical stimulates MGL-2, which in turn triggers the release of yet more glutamate. This process then repeats on a loop; and every time glutamate is released, it activates the neuron responsible for initiating reversals.

“These findings suggest a simple model for how repetition can occur in worms,” says Katz. “And, it turns out, this model may hold up in more complex nervous systems.”

Indeed, past experiments have shown that GLT-1 mutations cause repetitive grooming in mice, and that compounds blocking the mouse version of MGL-2 eliminate similar behavior in other contexts. Taken together with the new findings in C. elegans, this research suggests that abnormal glutamate secretion may underlie repetitive behaviors across the animal kingdom—raising the possibility that they may be relevant to understanding pathological repetition in humans.

Consistent with this idea, human genetics studies have found mutations associated with glutamate signaling in patients with obsessive compulsive disorder and autism spectrum disorders, both of which can be accompanied by repetitive behavior.

“We were really excited to see these links in the scientific literature because it means our findings may help uncover a plausible mechanism underlying an important class of human diseases,” says Shaham. “And, more broadly, we’re showing that candidate genes affected in human disease can be studied and verified in the simpler worm.”

Drowsy worms offer new insights into the neuroscience of sleep

Scientists studying worms have discovered a group of cells that help the body transition from wakefulness to slumber.

What happens to a dying cell’s corpse? New findings illuminate an old problem

Scientists have discovered a curious way for cells to die. In studying it, they are learning about how remnants of diseased cells are normally chewed up and removed.