Targeting a single protein might treat a broad range of viruses 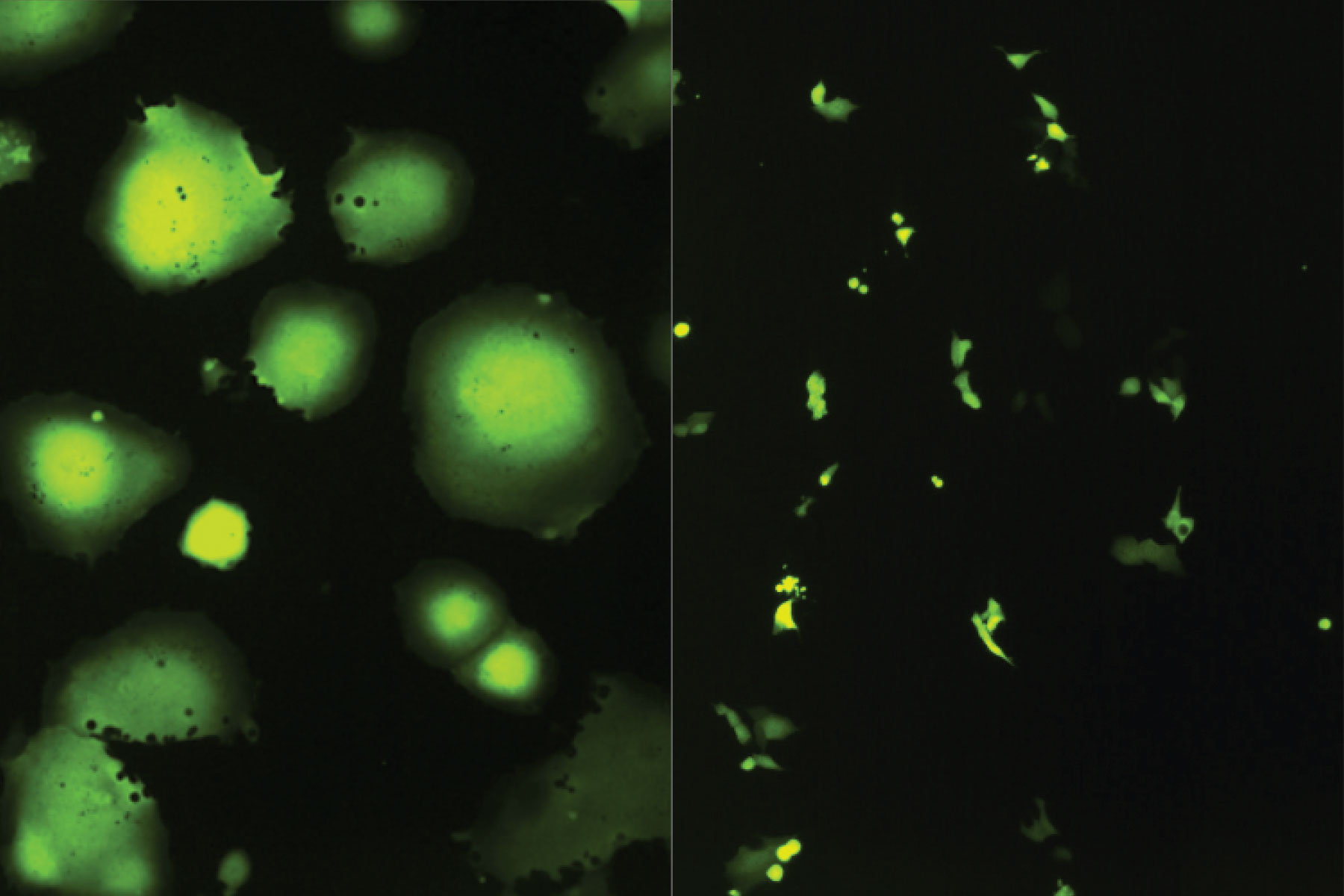 The measles virus is suppressed (right) when a key protein, SPCA1, is decreased in the host. Credit: Hans-Heinrich Hoffmann.

Most drugs that fight viruses are designed to target individual pathogens. But scientists at The Rockefeller University have identified a protein that a broad range of viruses require to spread within a host—a discovery that could lead to fighting viruses as varied as parainfluenza, West Nile, and Zika with a single drug.

All viruses use proteins from the host’s cells in order to replicate. A team in Charles M. Rice’s lab has identified a calcium-transporting protein that is needed by many viruses during the later stages of their life cycles. The researchers showed that depleting this protein in host cells significantly impairs the viruses’ ability to spread, without harming the cells.

By indicating a way that a single medicine could fight many infections, these advances have the potential to multiply the return on time and effort invested in drug development. The researchers’ findings were reported this month in Cell Host & Microbe.

“There’s been a push to get broader antivirals, and that’s difficult because viruses tend to be very different in what they do, exactly,” says Hans-Heinrich Hoffmann, the lead author of the study. “The key to creating a broad antiviral medicine is to find a host protein that many viruses need but that is not essential to the cell’s survival. And that’s exactly what we found here.”

From RSV to Zika

The researchers launched their study by trying to find a host protein required by the human respiratory syncytial virus (RSV), a major virus that is particularly dangerous to children and the elderly, causing an estimated 3.4 million hospitalizations a year. There are currently no vaccines against RSV or specific antivirals that fight it.

Even a partial loss of the protein, the calcium pump SPCA1, limited the ability of many viruses to mature and spread, the scientists found. Cells that lack the protein were also less susceptible to initial infection.

After finding that RSV requires SPCA1, the researchers determined that many other viruses, both insect-borne and respiratory, need the protein. Among those is Zika, the mosquito-borne virus linked to brain malformation in infants. As with RSV, there are no approved antivirals for Zika.

It is one thing to study whether individual cells can survive without a protein. But to be useful as a therapy, researchers would need to understand how a lack of SPCA1 affects an entire organism—such as an actual patient.

There are, in fact, individuals who have reduced levels of SPCA1, as a result of a rare genetic disorder known as Hailey-Hailey disease. The disease causes skin problems, such as blisters and lesions, but is not life-threatening. Furthermore, cell cultures derived from patients with Hailey-Hailey disease indicate that their cells are less susceptible to certain infections, including RSV—a result that correlates with the researchers’ other findings.

“We know that these patients get by with only half the normal amount of the protein, and we have evidence that this may even offer a protective effect,” says Rice, who is the Maurice R. and Corinne P. Greenberg Professor in Virology and head of the Laboratory is Virology and Infectious Disease. “It’s a promising avenue for drug development.”

This research was supported in part by a grant from the Greenberg Medical Research Institute, the Robertson Foundation, several generous donors and the NIDDK award DK095666.