A library was a major element in the 1904 proposal of the Executive Committee of the Rockefeller Institute for Medical Research, incorporated on June 13, 1901. The Committee began its work in temporary laboratories at 127 East 50th Street, while construction of permanent headquarters began on land given by John D. Rockefeller at York Avenue and 66th Street. The Laboratory Building (Founders Hall) opened on May 11, 1906. However in September 1903 the Executive Committee had already authorized Dr. Herter and Dr. Flexner to acquire in Europe a nucleus collection of materials for the establishment of the Library in the Laboratory Building. 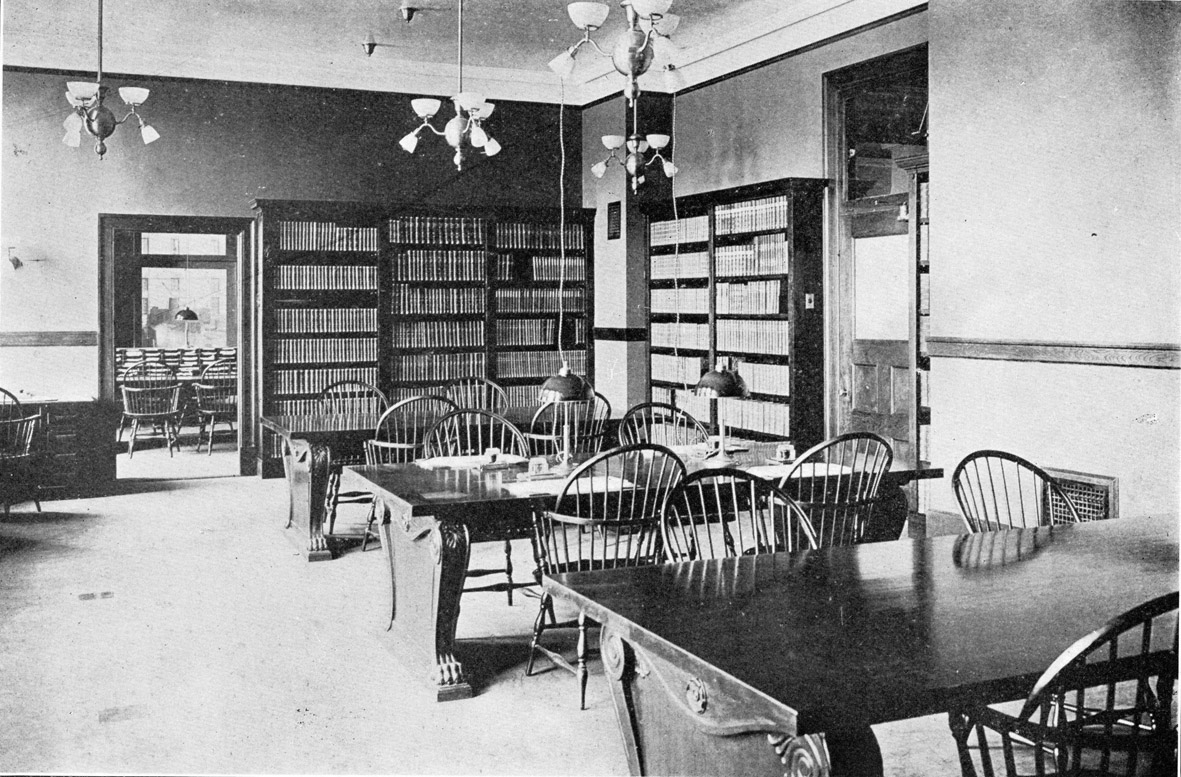 During the following two years, the formative stages of the Library cost the Institute less than $1,000 per year, including the Herter-Flexner purchase of periodicals, and implementation of operational decisions such as the design of a suitable book plate, and the selection of “house employees”: one of these was Miss Schiedt engaged as library “stenographer” in January 1906. The Library was established in two rooms at the north end of the first floor of the Laboratory Building (now part of Human Resources) and by 1911 the collection numbered nearly 6,000 volumes. In that year the care of the Library was entrusted to Miss Trask, the first professionally trained librarian, who managed the Library until 1938.

The first physical move of the Library came in 1920, when the rapidly growing collection, now numbering over 11,000 volumes, forced expansion into two small neighboring rooms and the Assembly room, which today is the central lobby of Founders Hall. This was also a record year for acquisitions – nearly 1,000 items, partly due the influx of European periodicals held back by World War I. 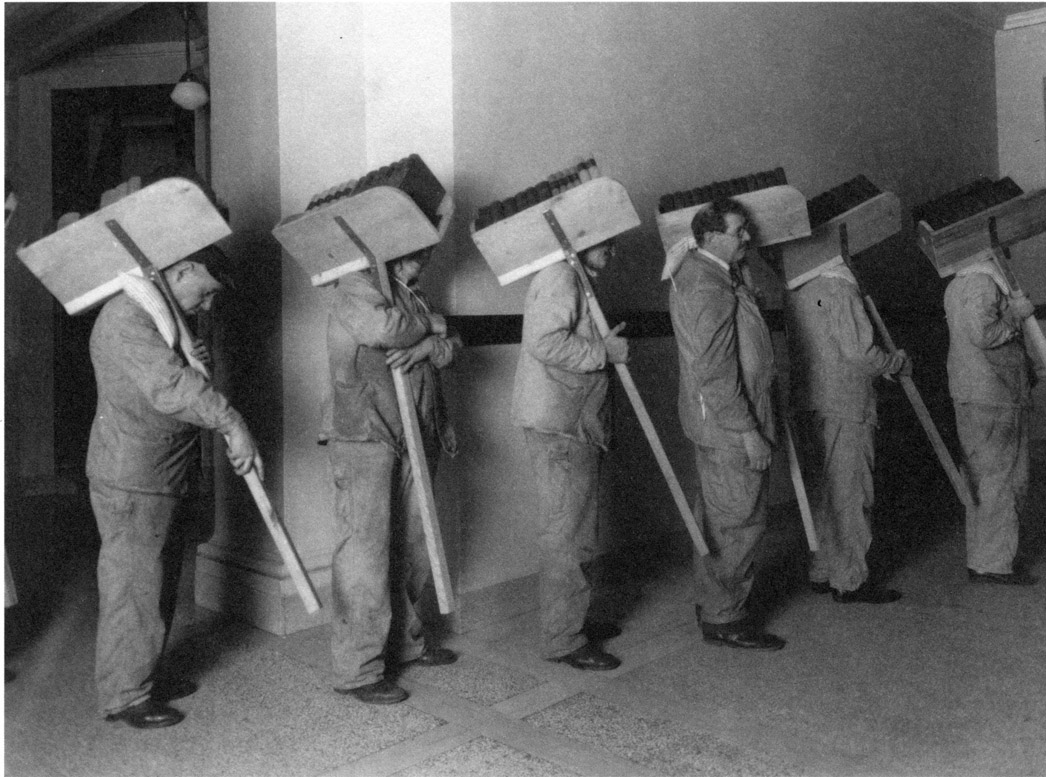 Workers move books to the new library in Welch Hall, 1929. Courtesy of the Rockefeller Archive Center

By 1923 the five-room Library was outgrown, so that completion of the 38,500-volume capacity quarters in the newly-constructed Welch Hall in 1929 came none too soon, with its promise of “room to grow for at least fifty years”. Unfortunately that promise ran out in the late 1950s. In February 1959 the Faculty Committee of the Library reported: “…the margin of extra space which normally is considered minimal by libraries was reached in 1957…we will need more space by 1967, and probably before…”

What was to be named Welch Hall was two stories above the ground, with three levels of basement. The Library was housed on the second floor, which had an open mezzanine. This was converted in the mid-fifties to a closed floor with stacks and individual study rooms. Potential expansion space existed in three core stacks on the basement levels, used at first by the Publications Division for storage. The first floor of the building was the dinning room for faculty and staff.

In 1926 The Rockefeller Institute Library first began to borrow needed materials from other libraries, chalking up 323 loans in that year alone, chiefly from the New York Academy of Medicine, Columbia University, and the American Museum of Natural History.

In these early years, the Library won and held a significant place in the library world, and maintained a remarkable record of service to its own users. The Welch Hall Library was innovative for its time in terms of structure and equipment, and was visited frequently by admiring professionals. The collection beame so notable that by 1936 interlibrary loans were being made to other libraries, and by 1948 more books were being lent per year (859) than were being borrowed from others (580).

In 1936 President Gasser ordered broadening of the scope of the collection to include “non-scientific” books for the first time – books on the history of medicine and science, medical classics, and biography – and requested that staff scientists supply to the Library reprints of their published works; the first archival function for the Library. 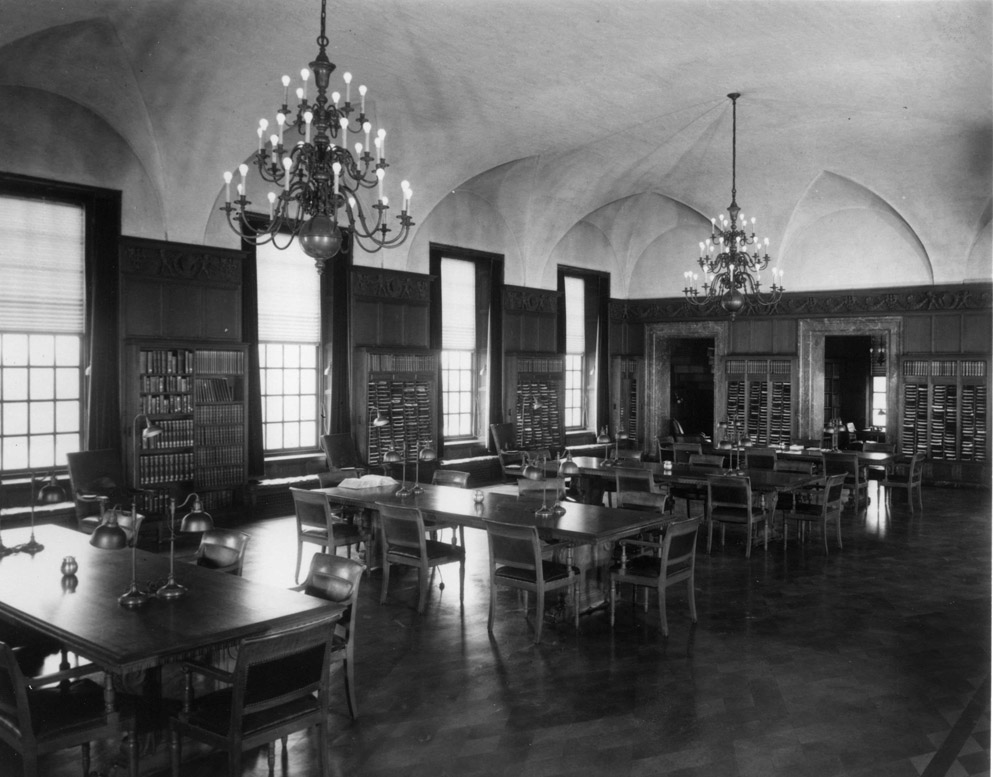 In March 1942 the new Librarian, Ms. Judkins, established the Patients’ Library in the Hospital and during its four years of life (until June 1946) this library grew to about 1,000 volumes and provided 24,542 loans of books to 1,166 patients.

The end of the World War II found the Library again out growing its space. By 1945, the collection had grown to nearly 30,000 volumes, with an annual circulation of more than 5,000 volumes, a periodical subscription list of more than 400 titles, and an annual budget approaching $100,000 mark.

In 1954 the Library introduced a registration book for recording after-hours users of the Library. This book was maintained by personnel of the campus Security Department, and enabled use of the Library virtually 24 hours a day, seven days a week.

In the early months of 1958 reclassification of the entire collection into the subject categories provided by the Library of Congress Classification Scheme was began. It was completed in May of 1960 and the monumental task of revising the Card Catalog to conform to the reclassification was accomplished by Sonya Wohl, who became Associate Librarian, a new designation, in 1960, and Mrs. Mirsky in 1967. 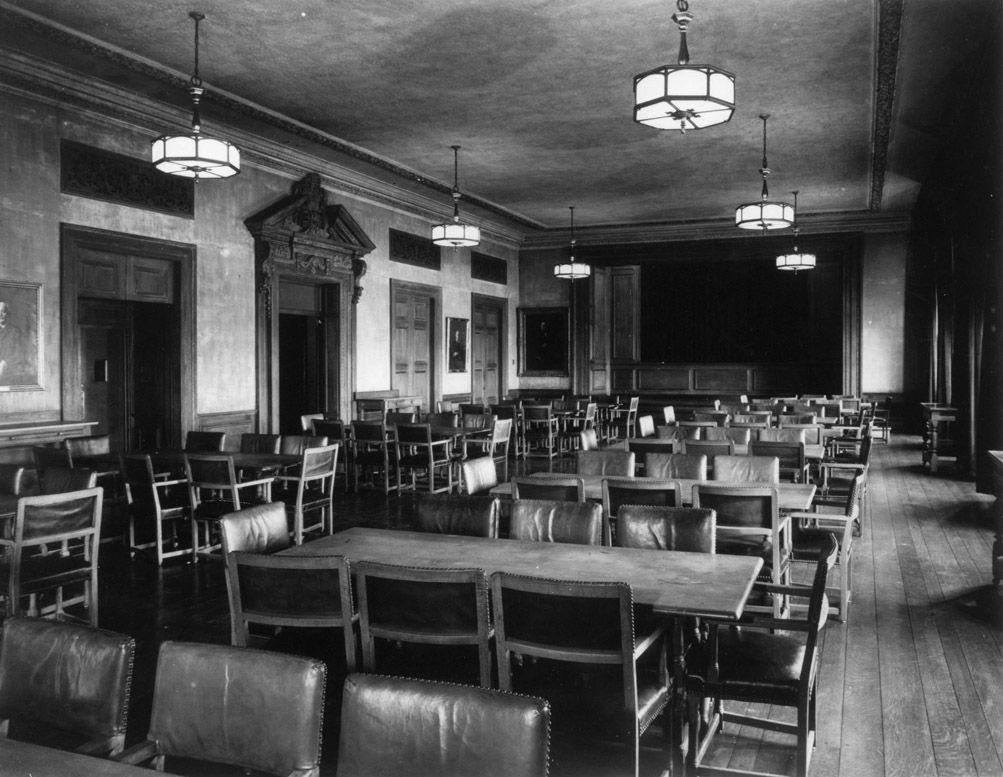 From 1945-1965 the Library was operated by three professional librarians virtually without non-professional help. In 1965 with the departure of Ms. Judkins and the appointment of Dr. Mirsky, Professor Emeritus of Cell Biology at the University, the Library begun to take modern form. For the first time, library operations and services were based on consultation with its professional staff and with members of the community it served. By 1971, when Dr. Mirsky officially retired, the total staff numbered over twenty, an annual budget of over $300,000 with a collection grown to more than 150,000 volumes, nearly 2,000 periodical titles, and an annual circulation of nearly 30,000 items.

The increasing richness of the collection and the extended open hours instituted in 1954 brought inceasing numbers of readers to use shrinking reading space. Despite the overcrowding and lack of reader space, pressure from non-University people desiring access to the collection resulted in limited permissions to outside users. In 1973 holders of the Cornell University Medical College Library Card were granted on-site use of the Library, but not borrowing privileges. Later, the Library opened it’s doors to several other neighboring institutions, including New York Hospital, Memorial Sloan Kettering Cancer Center, Manhattan Eye, Ear and Throat Hospital, the Hospital for Special Surgery, the New York Blood Center, and the Institute for Muscle Disease.

In 1971 a three-stage Library development program was announced: renovation of Welch Hall to get additional space as a necessary temporary expedient; completion of new quarters for the bulk of the books in mathematics and physics; and construction of a totally new Library building in the immediate future. With the opening of the Tower Cafeteria in the summer of 1971 the first step toward the fulfillment of this development program was taken: closing the dining room on the first floor of Welch Hall provided some needed growing space. After the renovation of Smith Hall Annex in 1984 the Library got the space for MPL (math-physics library). The stage now was set for an era of physical renovation of Library facilities.

On November 14, 2006, new golden lettering was installed above the entrance of Welch Hall, acknowledging Rita and Frits Markus’s contribution to the modernization of the library. The installation of the sign was just the first step in the major renovation effort that has transformed the university’s library into a 21st-century information hub. 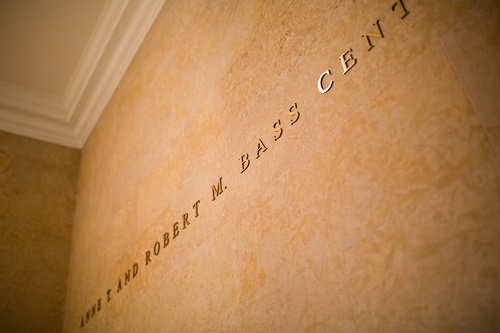 In 2010, University trustee Robert Bass, a chairman emeritus of the National Trust for Historic Preservation, noted the importance of the architectural restoration of Welch Hall. He and his wife Anne made a leadership gift to the Welch Hall project. In honor of the Bass’s contribution, the university has established the Anne T. and Robert M. Bass Center for Community Life.

The Welch Hall renovation began in January 2011 and was finished two years later. The centerpiece of the new Welch Hall is a historically accurate refurbishment of the main reading room on the second floor. The wood paneling, shelves, furniture, ceiling and elaborate chandeliers have been painstakingly cleaned and repaired, and the original cork floor has been replaced with new custom-cut cork to match the original pattern. On this floor and throughout the building, original furniture has been restored and returned to use wherever possible. Details such as doors, windows and light fixtures have been reused or, where necessary, custom-built to match the building’s original design.

The Great Hall on the first floor of Welch Hall has been restored and updated with a top-of-the –line audio-visual system and is now used for lectures, board meetings, and special university events.

Below, on the A and B levels, previously derelict space has been opened offering new quiet areas for reading and study, and comfortable, modern meeting rooms for small groups. The A level provides study space for the Rockefeller community and hosts a fully equipped classroom outfitted with laptops and video conferencing capabilities. Modern compact shelving on the B level houses one half of the library’s book collections.

The library, which has long been a vital part of the university’s academic culture, is now better suited to the needs of a twenty-first century research institution. 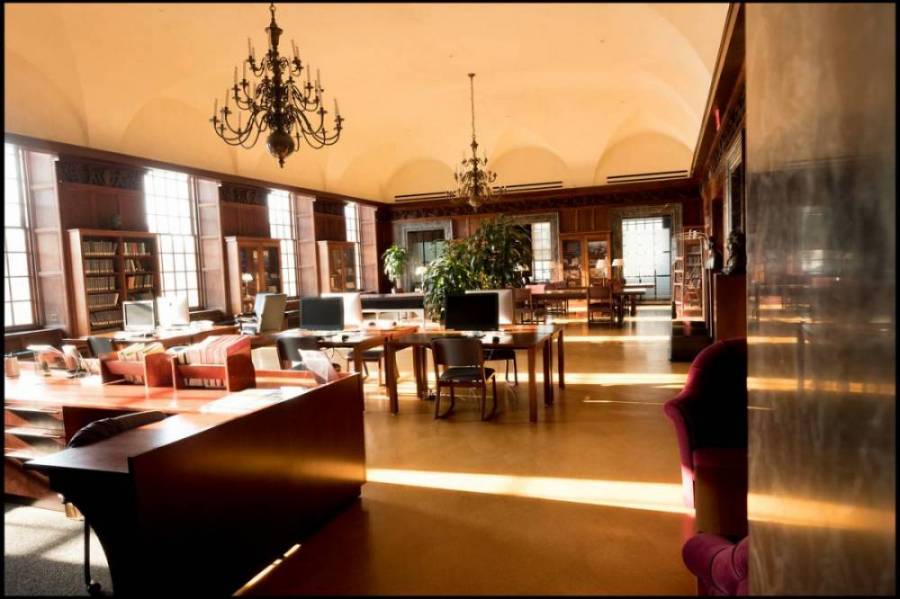 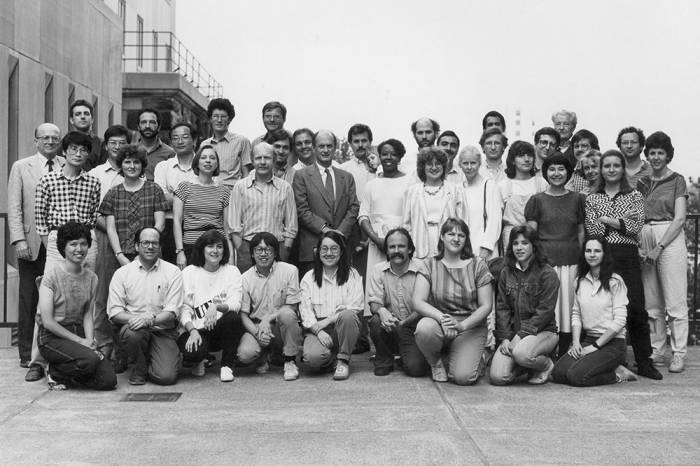