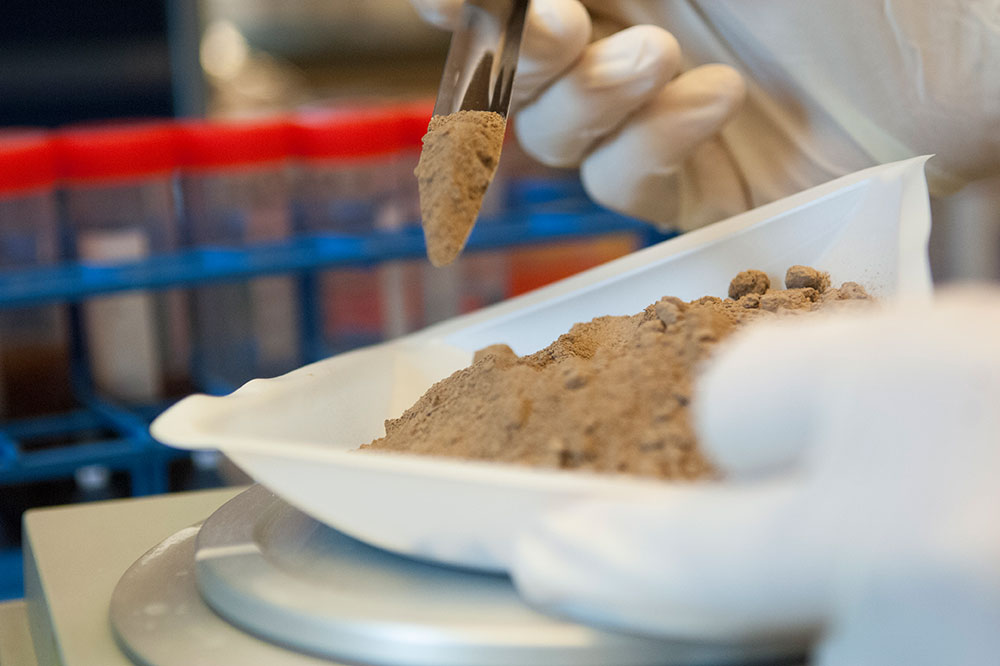 In bacterial DNA extracted from soil, researchers discovered a compound related to the antibiotic colistin.

For years, public-health experts have been sounding the alarm about the next phase in humanity’s co-existence with bacteria—a dark future where emerging strains have rendered once-powerful antibiotics useless. The United Nations recently projected that, unless new drugs are developed, multidrug-resistant infections will force up to 24 million people into extreme poverty within the next decade and cause 10 million annual deaths by 2050.

Scientists are especially apprehensive about a broad group of bacteria that circulate in hospitals and can dodge not only blockbuster drugs like penicillin and tetracycline, but even colistin, an antibiotic long used as a crucial last option. When colistin fails, there is often no effective antibiotics for patients with multidrug-resistant infections.

Now, Rockefeller scientists report on their discovery of a compound that could potentially outmaneuver colistin resistance. In animal experiments, this prospective antibiotic was highly potent against dangerous opportunistic pathogens like Acinetobacter baumannii, the most common cause of infections in healthcare settings. Published in Nature, the findings could make it possible to develop a new class of antibiotics to combat strains responding to no other treatments.

Colistin has long been abundantly used in the livestock industry, and more recently in the clinic. The overuse is believed to have put a staunch evolutionary pressure on bacteria, compelling them to develop new traits to survive. As a result, some species have acquired a new gene called mcr-1 that evades colistin’s toxicity, making these bacteria resistant to the drug.

Colistin resistance spreads fast, in part because mcr-1 sits on a plasmid, a ring of DNA that isn’t part of the bulk bacterial genome and can transfer easily from cell to cell. “It jumps from one bacterial strain to another, or from one patient’s infection to another’s,” says Zongqiang Wang, a postdoctoral associate in the lab of Sean F. Brady.

Wang and his colleagues wondered if there are natural compounds that could be used to fight colistin-resistant bacteria. In nature, bacteria are constantly competing for resources, developing new strategies to thwart neighboring strains. In fact, colistin itself is produced by a soil bacterium to eliminate competitors. If a rival resists the attack by picking up mcr-1, the first microbe might subsequently acquire a new mutation, launching a novel version of colistin capable of killing the mcr-1 bacteria.

“We set out to search for natural compounds that soil bacteria may have evolved to fight their own colistin resistance problem,” says Brady, who is Rockefeller’s Evnin Professor.

His team used an innovative approach that sidesteps the limitations of traditional methods for antibiotics discovery. Instead of growing bacteria in the lab and fishing for the compounds they produce, the researchers search bacterial DNA for the corresponding genes.

In sifting through more than 10,000 bacterial genomes, they found 35 groups of genes that they predicted would produce colistin-like structures. One group looked particularly interesting as it included genes that were sufficiently different from those coding for colistin to suggest they would produce a functionally distinct version of the drug.

In further analyzing these genes, the researchers were able to predict the structure of this new molecule, which they named macolacin. They then chemically synthesized this never-before-seen relative of colistin, yielding a novel compound without ever needing to extract it from its natural source.

In lab experiments, macolacin was shown to be potent against several types of colistin-resistant bacteria including intrinsically resistant Neisseria gonorrhoeae, a pathogen classified as a highest-level threat by the Centers for Disease Control and Prevention. Colistin, on the other hand, appeared to be totally inactive against this bacterium.

Next, the scientists tested the new agent in mice infected with colistin-resistant XDR A. baumannii, another highest-level threat pathogens. Mice that received an injection of optimized macolacin completely cleared away the infection in 24 hours, while those treated with colistin or placebo retained at least the same amount of bacteria present during the initial infection.

“Our findings suggest macolacin could potentially be developed into a drug to be deployed against some of the most troubling multidrug-resistant pathogens,” says Brady.

In another study, Brady’s lab used similar methods to explore a different class of antibiotics, called menaquinone-binding antibiotics (MBA). In work published recently in Nature Microbiology, the researchers showed that, in mice, the new MBAs they identified are effective against methicillin-resistant Staphylococcus aureus, another cause of dangerous infections in healthcare settings.

Wang adds that the evolution-based genome mining method used to discover macolacin could be applied to other drug-resistance problems, as well. “In principle, you could search bacterial DNA for new variants of any known antibiotic rendered ineffective by drug-resistant strains,” he says.

Scientists developed a method to genetically engineer gut bacteria to produce molecules that have the potential to treat certain disorders by altering human metabolism.