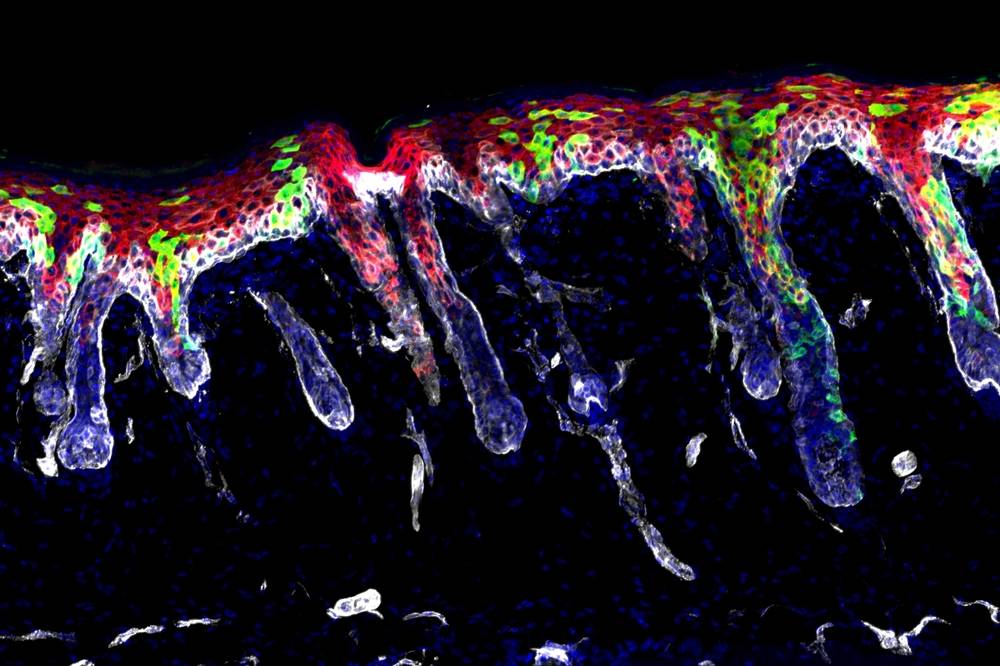 Epidermal stem cells derived from the hair follicle (green) are almost indistinguishable from stem cells native to the epidermis. But the memory of their journey to the surface changes their approach to wound repair.

A trifling paper cut is a site of frenzied activity. Within it, a squad of epidermal stem cells briskly regenerate to patch up the wound. A closer inspection of this war-torn swath of epidermis will reveal that, while some of the stem cells are native to the area, others are newcomers—former hair-producing stem cells that, upon sensing nearby injury, migrated from the hair follicle to the wound bed, where they transformed to resemble indigenous epidermal stem cells.

Now, a new study demonstrates that, within their genetic material, these relocated stem cells retain memories of how to travel from the follicle to the skin’s surface, repair damaged skin, and finally adapt to their new home. These seasoned stem cells are largely indistinguishable from naive epidermal stem cells. But the new research, published in Science, suggests that they are primed to heal wounds faster and, after repeated wounds, may develop memories that could lead to chronic disease and cancer.

In recent years, scientists have found that immune cells acquire epigenetic changes when fending off pathogens, sensitizing them to further inflammation in a process known as trained immunity or inflammatory memory.

Fuchs and colleagues began investigating inflammatory memory in skin back in 2017, seeking to unravel some of the mysteries surrounding psoriasis, atopic dermatitis and chronic wounding. They discovered that epidermal stem cells, like immune cells, can draw on epigenetic memories of inflammation to muster non-specific, short-term responses to inflammation and injuries.

“Memory was once thought to be a privilege of T cells and B cells of the immune system,” Fuchs says. “But our findings have shown that it’s a more widespread phenomenon.”

Practically, this means that skin inflamed once will heal faster when damaged a second time, thanks to proteins that serve as molecular bookmarks tucked into the cell nucleus. The bookmarking reminds each cell which genes it had to activate or silence to defeat a prior challenge, empowering it to respond more efficiently to future injuries. No longer a privilege of immune cells, inflammatory memory has since been found in airway and intestinal epithelia, with implications for asthma and inflammatory bowel disease.

In this new study, Fuchs’s team focused on minor everyday skin injuries. Sixty days after such an injury, they found that the mouse’s epidermal stem cells were indeed capable of remembering inflammation and learning from it to improve wound healing. But these stem cells, which had abandoned the hair follicles to rise to the surface and maintain the skin’s inner layer, also contained a number of markers in their genetic material that are not seen in run-of-the-mill trained immunity. Memories of their previous and current jobs gave the stem cells newfound flexibility—they could regenerate either hair or epidermis when challenged to do so. And memories of their migration to the skin’s surface enabled the immigrant epidermal stem cells to mobilize more efficiently than native epidermal stem cells in response to fresh injuries.

“We were surprised by the wide diversity, and cumulative nature, of memories that stem cells can retain,” says Kevin Gonzales, a postdoc in the Fuchs lab and first author on the study. “Thus far epigenetic memory has mainly been shown to record events of inflammation, but our experiments suggest that stem cells can potentially remember other things as well, perhaps every major stimulus that they encounter.”

Although speedy wound repair is usually a good thing, studies have raised the possibility that epigenetic memory may lead to chronic disease. “We know that inflammatory bouts of psoriasis often occur on the same sites and, in cancer, we know that tumors often arise at sites of previous injury,” Gonzales says. “This suggests that the diversity of memories accumulated over time could be culpable for a variety of chronic diseases that arise later in life.”

Fuchs adds that in mice, potentially dangerous stem-cell memories form after even minor injuries, and persist for at least six months—the equivalent of five or six years of human life. “It probably happens to most of us several times a week. It is likely that these memories originated in evolution to help animals heal wounds faster and defend themselves against future encounters with pathogens. However, humans live longer, and it is disconcerting to think that each time, we are developing long lasting memories of our injuries and exposure to pathogens and other irritants.”

This recent study contributes to a larger body of work that is teaching scientists about a bevy of inflammatory diseases, many of which develop in the epithelial tissues that are our first line of defense from the outside world. “The prevailing treatment for chronic inflammatory disorders of these epithelial tissues are immunosuppressive drugs and, while those may help, there is mounting evidence that suppressing the immune system may not target the roots of the problem,” says Fuchs.

In the future, Fuchs hopes to provide better treatment alternatives by drilling down to the fundamental mechanisms behind the formation of maladaptive stem-cell memories. “Ideally, we would eventually be able to get rid of bad memories and keep only the good ones,” she says. “We’re not there yet, but these new discoveries have created an explosion of interest in a broad variety of research fields and are already guiding us toward novel approaches to treating disease.”