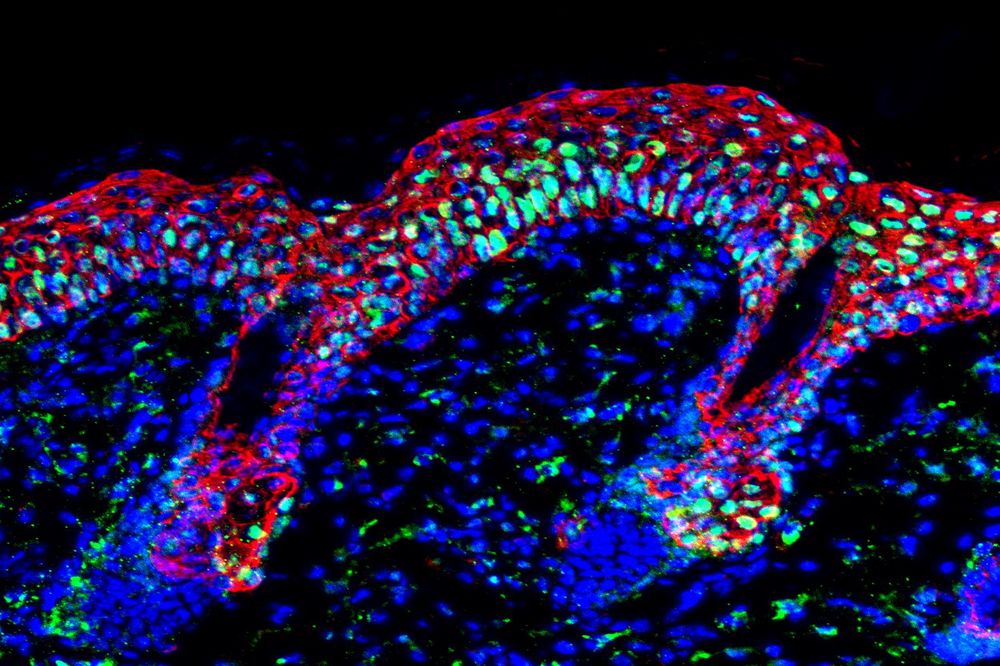 When a tissue experiences inflammation, its cells remember. Pinning proteins to its genetic material at the height of inflammation, the cells bookmark where they left off in their last tussle. Next exposure, inflammatory memory kicks in. The cells draw from prior experience to respond more efficiently, even to threats that they have not encountered before. Skin heals a wound faster if it was previously exposed to an irritant, such as a toxin or pathogen; immune cells can attack new viruses after a vaccine has taught them to recognize just one virus.

Now, a new study in Cell Stem Cell describes the mechanism behind inflammatory memory, also commonly referred to as trained immunity, and suggests that the phenomenon may be universal across diverse cell types.

“This is happening in natural killer cells, T cells, dendritic cells from human skin, and epidermal stem cells in mice,” says Samantha B. Larsen, a former graduate student in the laboratory of Elaine Fuchs at The Rockefeller University. “The similarities in mechanism are striking, and may explain the remitting and relapsing nature of chronic inflammatory disorders in humans.”

When thinking about our immune system, we default to specific immunity—that cadre of T cells and B cells trained, by experience or vaccination, to remember the specific contours of the last pathogen that broke into our bodies. But there’s a less specific strategy available to many cells, known as trained immunity. The impact is shorter-lived, but broader in scope. Trained immunity allows cells to respond to entirely new threats by drawing on general memories of inflammation.

Scientists have long suspected that even cells that are not traditionally involved in the immune response have the rudimentary ability to remember prior insults and learn from experience. The Fuchs lab drove this point home in a 2017 study published in Nature by demonstrating that mouse skin that had recovered from irritation healed 2.5 times faster than normal skin when exposed to irritation at a later date.

One explanation, the Fuchs team proposed, could be epigenetic changes to the skin cell genome itself. During inflammation, regions of DNA that are usually tightly coiled around histone proteins unravel to transcribe a genetic response to the attack. Even after the dust settles, a handful of these memory domains remain open—and changed. Some of their associated histones have been modified since the assault, and proteins known as transcription factors have latched onto the exposed DNA. A once naïve cell is now raring for its next fight.

But the molecular mechanism that explained this process, and how the cell could use it to respond to types of inflammation and injury that it had never seen before, remained a mystery.

Inside a memory domain

So the Fuchs lab once again exposed mice skin to irritants, and watched as stem cells in the skin changed. “We focused on the regions in the genome that become accessible during inflammation, and remain accessible afterwards,” says Christopher Cowley, a graduate student in the Fuchs lab. “We call these regions memory domains, and our goal was to explore the factors that open them up, keep them open and reactivate them a second time.”

They observed about 50,000 regions within the DNA of the stem cells that had unraveled to respond to the threat, but a few months later only about 1,000 remained open and accessible, distinguishing themselves as memory domains. Interestingly, many of these memory domains were the same regions that had unraveled most prodigiously in the early days of skin inflammation.

The stimulus-specific STAT3 transcription factor responds first, deployed to coordinate a genetic response to a particular genre of inflammation. This protein hands the baton to JUN-FOS, which perches on the unspooled genetic material to join the melee. The specific transcription factor that sounded the original alarm will eventually return home; FOS will float away as the tumult quiets down. But JUN stands sentinel, guarding the open memory domain with a ragtag band of other transcription factors, waiting for its next battle.

When irritation strikes again, JUN is ready. It rapidly recruits FOS back to the memory domain, and the duo charges into the fray. This time, no specific transcription factor is necessary to respond to a particular type of inflammation and get the ball rolling. The system unilaterally activates in response to virtually any stress—alacrity that may not always benefit the rest of the body.

But the same mechanism that keeps cells on high alert may instill a sort of molecular paranoia in chronic inflammation disorders. When the Fuchs lab examined data collected from patients who suffer from systemic sclerosis, for instance, they found evidence that JUN may be sitting right on the memory domains of affected cells, itching to incite an argument in response to even the slightest disagreement.

“These arguments need not always be disagreeable, as animals benefit by healing their wounds quickly and plants exposed to one pathogen are often protected against others,” says Fuchs. “That said, chronic inflammatory disorders may owe their painful existence to the ability of their cells to remember, and to FOS and JUN, which respond universally to stress.”

The scientists hope that shedding light on one possible cause of chronic inflammatory disease may help researchers develop treatments for these conditions. “The factors and pathways that we identify here could be targeted, both in the initial disease stages and, later, during the relapsing stages of disease,” says Cowley. Larsen adds: “Perhaps these transcription factors could be used as a general target to inhibit the recall of the memories that cause chronic inflammation.”