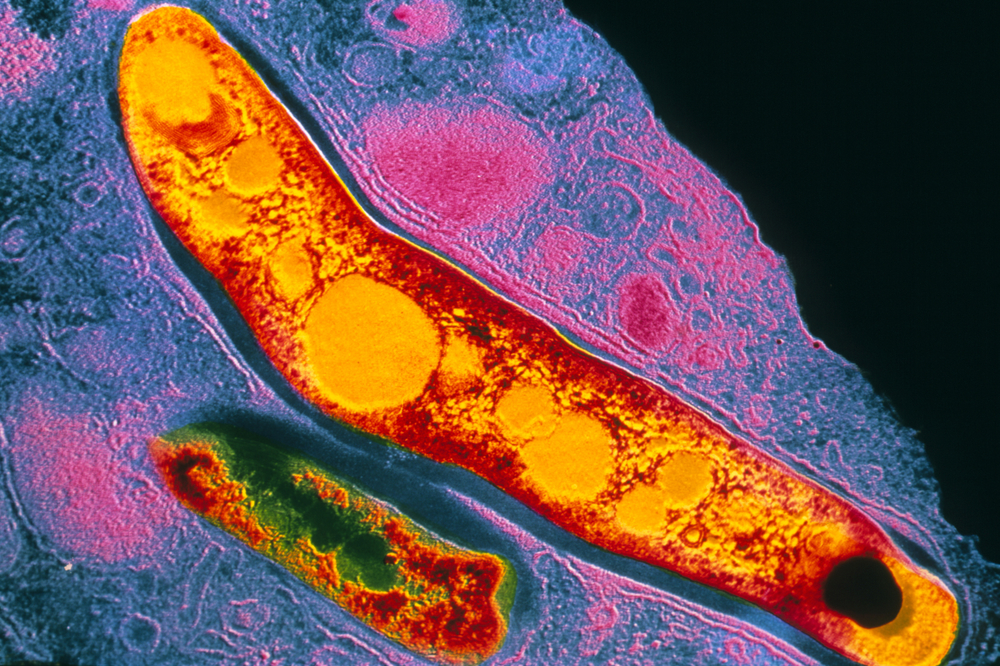 False-color TEM of the bacterium Mycobacterium tuberculosis (gold) within a macrophage. Credit: CNRI

Developing drugs to combat tuberculosis, or TB, can be frustrating business. A gene essential to the bacteria’s lifecycle is discovered, scientists rush to develop drugs that inhibit the target, and then—disappointment. Volleys of compounds hurled at the essential gene target have little impact on microbial growth. The bacteria live on. The scientists return to the drawing board.

Now, a new study in Cell helps explain why target-based antibiotics have had so much trouble getting off the ground. One answer is that essential gene targets differ in their degree of vulnerability to antibiotics. An ideal target, the researchers found, is so vulnerable to attack that the cell cannot survive when it is even slightly inhibited. Invulnerable genes, on the other hand, can weather nearly total inhibition, eking out just enough target activity to keep the cell alive while beset with antibiotics. Further, the authors quantified vulnerability in a pathogen for the first time, producing an index that ranks almost every essential gene in Mycobacterium tuberculosis by the amount of inhibition necessary to disable the gene and cripple the cell.

“The failures of target-based drug discovery are often ascribed to problems with the compound, like its inability to cross the bacterial envelope,” says Jeremy Rock, head of The Rockefeller University’s Laboratory of Host-Pathogen Biology. “This is the other side of that coin. If you pick a gene target that is highly invulnerable, you’re just not setting yourself up for success.”

Essential, but not vulnerable

New antimicrobial drugs typically come from broad screening tests. Researchers dump libraries of compounds onto bacteria in the lab, and see which ones prevent further growth. It’s quick, dirty, and incredibly effective—every drug approved to treat TB was discovered in this manner.

A less celebrated method involves identifying essential genes that the bacteria cannot live without, and then developing compounds that inhibit those targets. Known as target-based drug discovery, this method has given us a number of potent anticancer and antiviral drugs. But, to date, it hasn’t panned out for antibiotics. Rock and his team wondered why not.

Conventional wisdom had it that the compounds were getting lost en route. Blocked by the cell wall, pumped out upon entry, or metabolized within. Perhaps. Those were certainly problems that antibiotic hopefuls had faced. But Rock suspected that drug developers were also sometimes choosing the wrong targets. Because it’s not enough to identify an essential gene that a bacterium cannot live without. A good target should also be vulnerable.

A vulnerable gene buckles under pressure—even slightly hindering its expression will take the gene offline and cripple the bacteria. Invulnerable genes, however, can take quite a beating and still get their essential jobs done. Given that most drugs inhibit only a portion of their targets, failed antibiotics could be finding their mark only to bounce off an invulnerable gene.

“If a target is highly invulnerable and requires 99 percent inhibition in order to kill the bacteria, then you’re going to need to target it with a small molecule that can do something special, like inhibit 99 percent of that gene product,” Rock says. “That’s not impossible but, if you have 600 essential genes to choose from, you don’t want to pick that one as your target.”

Rock and his team decided to quantify gene vulnerability in Mycobacterium tuberculosis, a pathogen that claims 1.4 million lives each year. They developed a technique to look at the whole genome of the pathogen at once, and rank each essential gene based on how much of it would need to be inhibited in order to kill the bacteria.

“We developed a system that can be tuned, from no inhibition to nearly 100 percent inhibition,” says Barbara Bosch, a physician-scientist in the Rock lab. “This allowed us to determine whether the bacteria were having serious fitness costs, or whether they were still alive and kicking.”

The resulting index, which relates inhibition percentages to bacterial fitness, suggests that vulnerability is a key factor in determining whether antibiotics succeed. Two of the most vulnerable genes, for example, happen to also be the targets of the two most potent TB drugs on the market. Conversely, two of the least vulnerable genes, coaA and def, were once promising drug targets before antibiotics tailored to inhibit those genes failed to kill the bacteria. The invulnerability of those targets may be one reason that these therapies flopped.

The index also identified several new targets that are essential, highly vulnerable, and as-yet unexplored by drug developers. Some of those targets are even more vulnerable than the current first-line TB therapies and influence surprisingly diverse activities in the cell.

“We expected that genes involved in the central dogma would be vulnerable—to replicate, you need to be able to turn DNA into RNA into protein,” Rock says. “But some of the most vulnerable genes were involved in protein folding and secretion. We wouldn’t necessarily have predicted that.”

“These are under-explored targets that would be worth exploring in the future.”

On vulnerability and druggability

In future studies, Rock and his team hope to test their index on TB that has infected a living organism; their current index is based solely on how TB reacts to inhibition in a Petri dish. “The next big step is investigating how vulnerability changes in the context of the host-pathogen relationship,” Rock says. “In vivo studies will give us a more complete picture of vulnerability.”

The preliminary findings, however, are likely to hold water, given that the results from the lab match clinical observations. Namely, effective TB drugs work by disabling genes that also rank high on the vulnerability index, while stubborn targets that baffle scientists rank lowest. The upshot is that drug developers would likely benefit from consulting the vulnerability index even now, prioritizing vulnerable genes when investing in target-based drug discovery.

“We don’t want to equate invulnerability with undruggability—that would be unfair,” Rock says. “But the path forward is to start prioritizing vulnerable targets over invulnerable ones.”

“If you want to work with an invulnerable target, it’s going to be an uphill battle.”