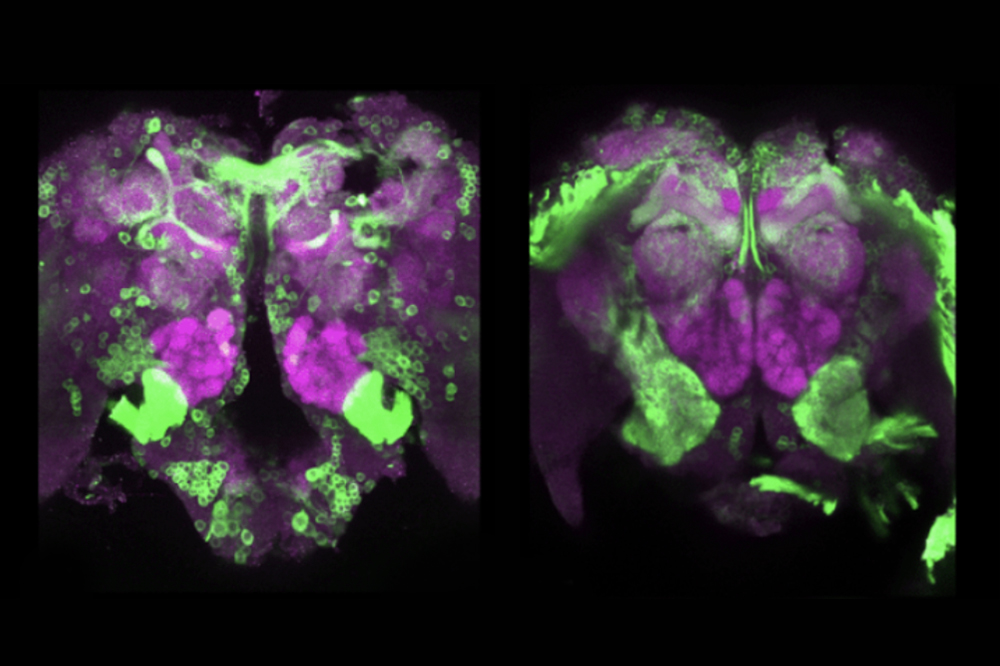 A side-by-side comparison of the fruitless gene in the female (left) and male (right) mosquito brain.

Male mosquitoes won’t bite you. For one thing, they cannot—males are hopelessly bad at finding humans and lack a specialized stylet to pierce your skin. But even if they could bite you, they would not want to. They refuse blood meals served to them in the lab through netting, even as their female counterparts engorge on what must appear to be a free lunch.

Now, a new study from the laboratory of Rockefeller’s Leslie Vosshall helps explain why. It appears that both mosquito sexes share the same neurons and brain structures needed to find humans, but that this hardware is hidden in the male mosquito brain, locked behind a simple genetic switch. Mutate the right gene, the researchers discovered, and male mosquitoes begin buzzing toward human scents in search of a prize that they do not even want.

Beyond clarifying why the male insects don’t naturally swarm toward humans, the findings might also contribute to our understanding of how female mosquitoes spread diseases that claim millions of lives.

“This opens up a path into the mosquito brain,” says lead author on the study Nipun Basrur, a PhD student in Vosshall’s lab. “We really had no idea what circuits in the brain might dictate how female mosquitoes sense humans and make decisions to bite them. Now that we know which gene is controlling them, we can look inside the brain and investigate further.”

Basrur and colleagues began their work by examining a gene called fruitless, which is known to control courtship behavior in fruit flies. When they knocked out the analogous gene in male mosquitoes, these insects, like fruit flies, failed to mate effectively with females. But the scientists chose to investigate further, suspecting that the mutation might also impact male mosquitoes’ desire for blood.

When offered warm blood through a net, however, mutant males abstained just like non-mutant males, even as female mosquitoes partook. When exposed to body heat, females liked what they felt. Mutant males, true to their sex, remained unimpressed by the promise of a blood meal—suggesting the corrupted gene doesn’t play a role in feeding behavior, per se.

But when the scientists offered these mutant males a human arm, they suddenly swarmed. “This was a truly unexpected—and spectacular—finding,” says Vosshall, who is the Robin Chemers Neustein Professor as well as an HHMI investigator. “We had never seen males interested in the scent of a human before.”

Later tests confirmed that, while mutant male mosquitoes still lacked the desire to drink blood and the ability to sense body heat, turning off the fruitless gene had allowed their brains to process the unique smell of a live human—activating a repressed urge to seek out humans just like a female. “This suggests that male mosquitoes actually possess the neural circuits required to hunt humans,” Basrur says. “Removing fruitless appears to reveal this latent behavior in males.”

An exciting, if theoretical, application would be one day using this information to masculinize female mosquitoes, blocking their ability to spread disease. Initial attempts to do so in the lab, however, rendered the female mosquitoes unviable due to blood-feeding and egg-laying defects. Of more immediate interest is the discovery that the neural circuits that females use to detect humans lie dormant in the male mosquito brain, guarded by a single gene.

Future studies from the Vosshall lab will investigate these latent neurons, continuing to explore how sex differences are encoded in the brain and determined by genes. “For a long time, the assumption was that sex-specific behaviors came from sets of neurons entirely specific to that sex,” Basrur says. “But recent work, including our study, has shown that both sexes often have the same neurons and that genetics controls how they are used.”