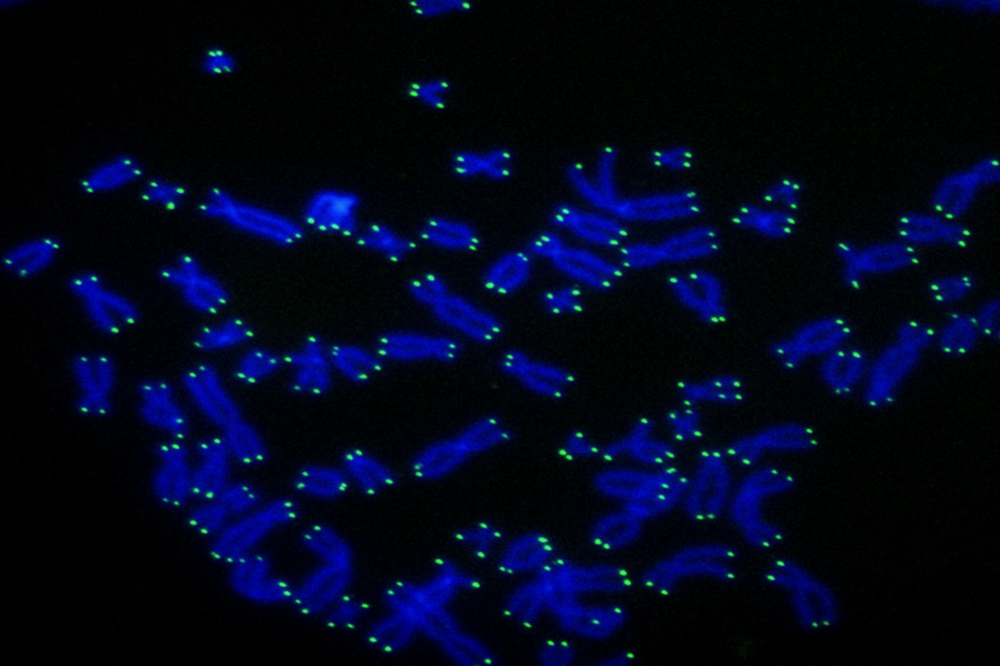 Human telomeres (green) at the ends of chromosomes (blue).

As time goes by, the tips of your chromosomes—called telomeres—become shorter. This process has long been viewed as an unwanted side-effect of aging, but a recent study shows it is in fact good for you.

New results from de Lange’s lab provide the first evidence that telomere shortening helps prevent cancer in humans, likely because of its power to curtail cell division. Published in eLife, the findings were obtained by analyzing mutations in families with exceptional cancer histories, and they present the answer to a decades-old question about the relationship between telomeres and cancer.

In stem cells, including those that generate eggs and sperm, telomeres are maintained by telomerase, an enzyme that adds telomeric DNA to the ends of chromosomes. Telomerase is not present in normal human cells, however, which is why their telomeres wither away. This telomere shortening program limits the number of divisions of normal human cells to about 50.

The idea that telomere shortening could be part of the body’s defense against cancer was first proposed decades ago. Once an early-stage tumor cell has divided 50 times, scientists imagined, depletion of the telomere reserve would block further cancer development. Only those cancers that manage to activate telomerase would break through this barrier.

The solution to a decades-old problem

The telomere tumor suppressor pathway can only work if we are born with telomeres of the right length; if the telomeres are too long, the telomere reserve would not run out in time to stop cancer development. Longer telomeres will afford cancer cells additional divisions during which mutations can creep into the genetic code, including mutations that activate telomerase.

For decades, de Lange’s lab has been studying the complex process by which telomeres are regulated. She and others identified a set of proteins that can limit telomere length in cultured human cells, among them a protein called TIN2. When TIN2 is inhibited, telomerase runs wild and over-elongates telomeres. But it was not known whether TIN2 also regulated telomere length at birth.

The stalemate on the telomere tumor suppressor continued until physicians at the Radboud University Medical Center in Holland reached out to de Lange about several cancer-prone families.  The doctors found that these families had mutations in TINF2, the gene that encodes the TIN2 protein instrumental to controlling telomere length. That’s when they asked de Lange to step in.

Isabelle Schmutz, a Women&Science postdoctoral fellow in the de Lange lab, used CRISPR gene-editing technology to engineer cells with precisely the same mutations as those seen in the Dutch families and examined the resulting mutant cells. She found that the mutant cells had fully functional telomeres and no genomic instability. They were, for all intents and purposes, normal healthy cells.

But there was one thing wrong with the cells. “Their telomeres became too long, ” de Lange says.  Similarly, the patient’s telomeres were unusually long. “These patients have telomeres that are far above the 99th percentile,” de Lange says.

“The data show that if you’re born with long telomeres, you are at greater risk of getting cancer, ” says de Lange. “We are seeing how the loss of the telomere tumor suppressor pathway in these families leads to breast cancer, colorectal cancer, melanoma, and thyroid cancers. These cancers would normally have been blocked by telomere shortening. The broad spectrum of cancers in these families shows the power of the telomere tumor suppressor pathway.”