How the immune system deals with the gut's plethora of microbes 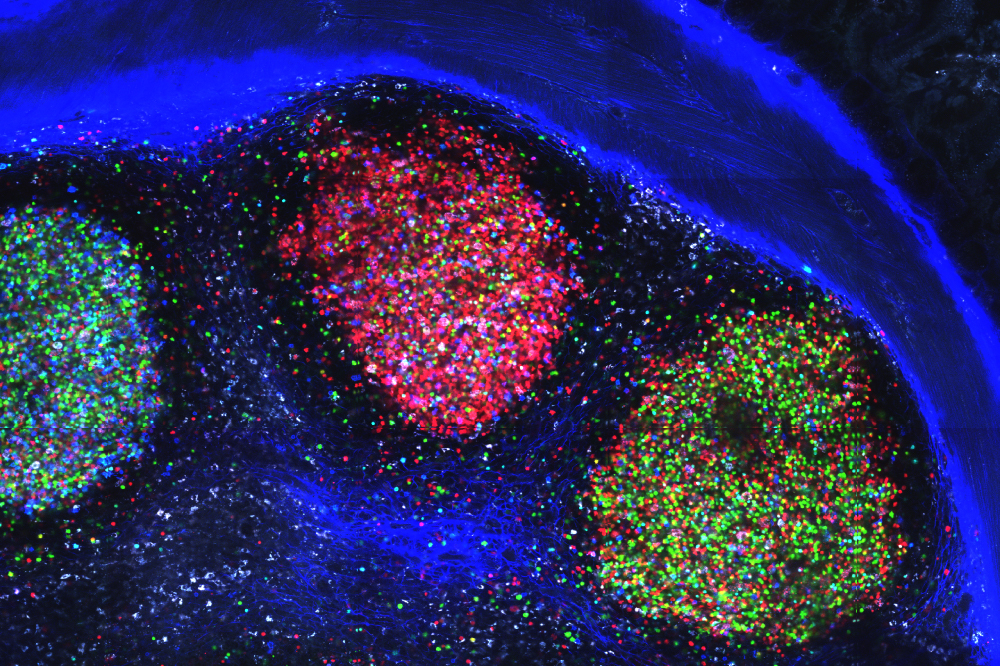 A large, multi-colored collection of germinal centers observed in the mesenteric lymph node of a mouse.

The gut is an unusually noisy place, where hundreds of species of bacteria live alongside whatever microbes happen to have hitched a ride in on your lunch. Scientists have long suspected that the gut’s immune system, in the face of so many stimuli, takes an uncharacteristically blunt approach to population control and protection from foreign invaders—churning out non-specific antibodies with broad mandates to mow the gut’s entire microbial lawn without prejudice.

But now, new research published in Nature suggests that the gut’s local immune system can be quite precise, creating antibodies that appear to home in on specific microbiota.

“It was thought that the gut immune system worked sort of like a general-purpose antibiotic, controlling every bug and pathogen,” says Gabriel D. Victora, an immunologist and head of the Laboratory of Lymphocyte Dynamics . “But our new findings tell us that there might be a bit more specificity to this targeting.”

The research suggests that our immune system may play an active part in shaping the composition of our microbiomes, which are tightly linked to health and disease. “A better understanding of this process could one day lead to major implications for conditions where the microbiome is knocked out of balance,” says Daniel Mucida, head of the Laboratory of Mucosal Immunology.

Specificity in the mouse gut

When faced with a pathogen, the immune system’s B cells enter sites called germinal centers where they “learn” to produce specific antibodies until one B cell emerges, finely-tuned to recognize its target with high efficiency. Dubbed a winner clone, this B cell replicates to generate a mob of cells that produce potent antibodies.

Victora, Mucida, and colleagues set out to study how these B cells interact with the melting pot of bacterial species in the gut—an overabundance of potential targets. Looking at the germinal centers that form in mice intestines, they found that about 1 in 10 of these gut-associated germinal centers had clear winner clones. They then homed in on the winning B cells and found that their antibodies were indeed designed to bind with ever increasing potency to specific species of bacteria living in the gut.

The findings show that even in the gut, where millions of microbes wave their thousands of different antigens and vie for the immune system’s attention, germinal centers manage to select specific, consistent winners.

“We can now investigate the winners and look at evolution in germinal centers as an ecological issue involving many different species, as we try to figure out the rules underlying selection in these complex environments,” Victora says. “This opens up a whole new area of inquiry.”

Prior infections appear to shield enteric neurons, preventing these key components of the body's "second brain" from dying off when future pathogens strike.

Helper T cells may play a dual role in the immune system, both encouraging and suppressing the process by which B cells mature.

Paul Cohen, expert on fat, is promoted to associate professor

Cohen, a physician-scientist exploring obesity and metabolic disease, has conducted groundbreaking research on the complex inner workings of fat tissue.