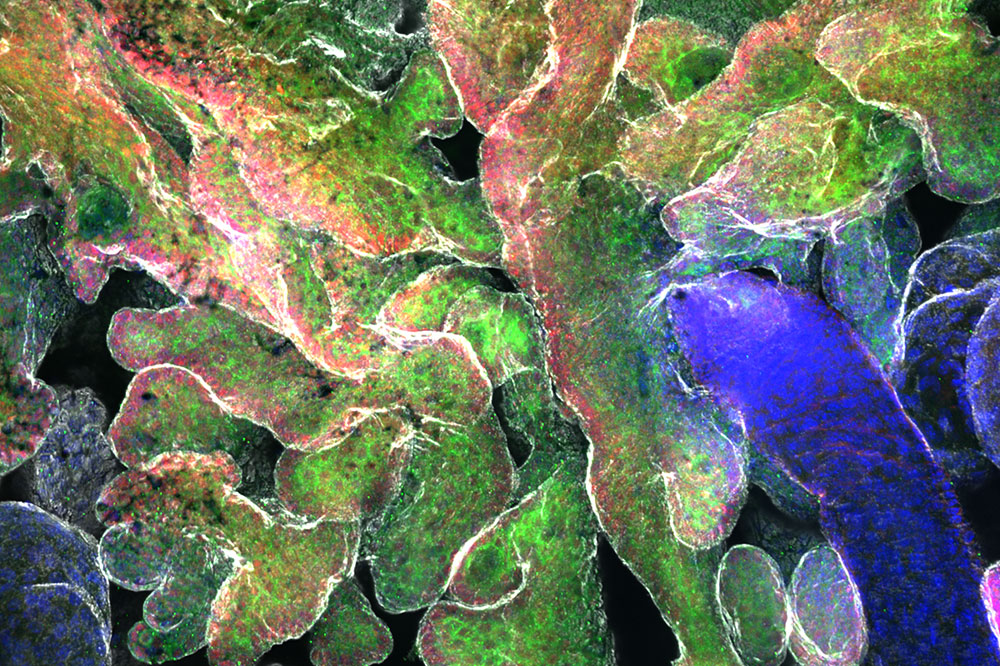 All cancers are the result of cells that have gone haywire, multiplying out of control and expanding beyond their normal constraints. But not all tumors are the same: For reasons that remain poorly understood, some are more likely to become aggressive and metastasize to other parts of the body.

New research highlights a long-overlooked aspect of how and why some tumors become more dangerous than others. A team led by Rockefeller’s Elaine Fuchs found that mechanical properties of the tissue elements that surround pre-malignant tumor cells powerfully shape the development of two of the most common forms of skin cancer, causing one to become far more aggressive and invasive than the other.

The work, published recently in Nature, may eventually help clinicians predict how a particular tumor will evolve and could lead to novel anti-cancer therapies.

Led by postdoctoral fellow Vince Fiore in the laboratory of Elaine Fuchs, the team induced each type of tumor in two different groups of genetically engineered mice, and then measured their physical properties and that of the surrounding tissue. Collaborating with researchers at Princeton University, they also constructed computer models of the epidermis that accurately simulated how the tumors arose and acquired their characteristic shapes.

Previous research had shown that in simple, single-layer tissues such as those found in the gut, tumors develop and change shape largely in response to the rapid proliferation of cancer cells and the forces they exert as the cells push and pull on one another. But the team’s computer simulations showed that these factors cannot generate the distinctive shapes and structures of basal and squamous cell carcinomas that form within more complex, multilayered tissues like the epidermis—a suggestion that was borne out by experiments on the mice.

So the team set about looking for other culprits that could in fact produce the two distinct tumor types.

A rock and a hard place

By analyzing differences in gene expression between the two types of tumors, Fiore and his colleagues identified a set of genes that play a critical role in setting the physical properties of the basement membrane, a thin dense layer of intertwined proteins secreted by the stem cells of the epidermis and its developing tumors. “The basement membrane acts as a kind of floor that separates the tumor from the surrounding tissue,” Fiore explains.

Computer modeling predicted that softening the basement membrane or increasing the rate at which it is assembled would generate the buds characteristic of basal cell carcinomas. Stiffening the membrane or slowing down its assembly rate, on the other hand, would cause the folding associated with squamous cell carcinomas.

To test those predictions, the researchers manipulated the expression of the genes in their lab animals, altering the stiffness and assembly rate of the basement membrane in various ways. The simulations proved correct: Changing the mechanical properties of the basement membrane did in fact influence both the shape and behavior of basal and squamous cell carcinomas.

“In each case, what we predicted would happen indeed happened,” Fiore says.

Further experiments revealed that basal and squamous cell carcinomas aren’t just shaped by the physical properties of the floor beneath their feet, however. Their structure and behavior are also influenced by the stiffness of the roof over their heads: the layers of so-called suprabasal cells that lie directly above them.

Squamous cell carcinomas are characterized by a relatively stiff suprabasal roof, making it more likely that the tumors will eventually break through the basement membrane floor, escape into deeper layers of the skin, and ultimately spread throughout the body. Basal cell carcinomas, whose suprabasal roof is less rigid, are more likely to stay put, rendering them more benign.

“Because epidermal stem cells make both basement membrane and overlying suprabasal cells, they control the tissue’s architecture,” says Fuchs, who is Rockefeller’s Rebecca C. Lancefield Professor. “However, as stem cells acquire cancer-inducing mutations that change their program of gene expression, they begin to lose control of the mechanical properties needed to keep the tissue fit and healthy.”

By identifying some of the genes that shape tumor development, the research could someday help clinicians predict whether a particular tumor is likely to become dangerously aggressive—and provide targets for drugs that might prevent that from happening.

“With these principles in mind, you can begin to understand how tumors become malignant, and then use that knowledge to perform risk assessment or develop new therapies,” Fiore says.