Brain study finds a molecular “off” switch for nicotine craving 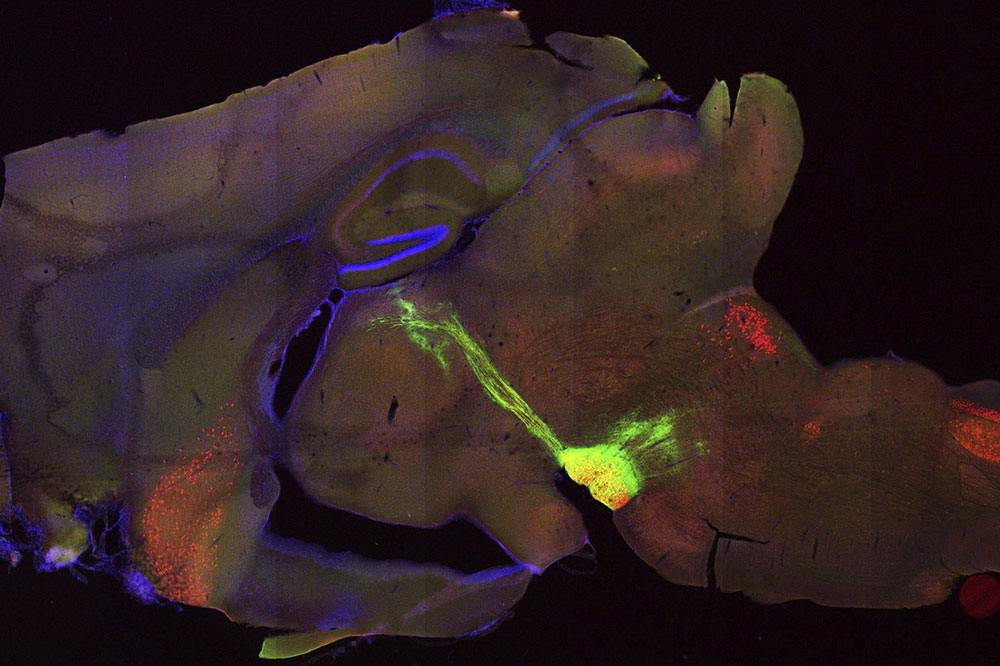 Nerve extensions from the habenula region of a mouse brain (green) extending towards the interpeduncular nucleus (yellow).

Like any addiction, nicotine dependence warps the brain in elaborate ways—which is why treating it tends not to be as simple as mustering one’s willpower. Even after trying every technique in the toolbox—the support of friends, family, and a great therapist; nicotine patches; prescription drugs—many smokers will sooner or later experience a craving of overpowering ferociousness.

An OFF switch for such moments would be a lifesaver for the millions of people who yearn to give up nicotine—and new research suggests that there might actually be one. In a recent study, Ines Ibanez-Tallon, a scientist in the lab of Nathaniel Heintz, who is James and Marilyn Simons Professor at Rockefeller, and colleagues at Mount Sinai Medical School, identified deep within the brain a receptor that seems to act like a lever for nicotine craving. By manipulating this circuit in a primordial part of the brain, the scientists were able to turn the desire to consume nicotine on and off in mice.

In a paper published in the Proceedings of the National Academy of Science, the researchers describe experiments in which they were able to alter nicotine sensitivity in the brains of mice and observe consequent behavioral changes. These findings paint a clearer picture of how nicotine keeps smokers hooked and could eventually help the researchers zero-in on a new target for more effective drugs to prevent and treat addiction in humans.

Nicotine and the Brain

The power of nicotine cravings makes smoking a notoriously hard habit to kick—according to the American Heart Association, it’s at least as hard as quitting heroin. Ninety percent of quitting attempts end in relapse, even with the most effective treatments currently available.

A small part of the brain known as the habenula, which is present in all vertebrates and known to be critical for the regulation of nicotine addiction, has long been a focus of Ibanez-Tallon’s research. Evidence from earlier work has implicated the habenula in both the rewarding and aversive responses to addictive substances such as nicotine; however, the underlying mechanics weren’t clear.

In recent years, she and others in the field have been looking for strategies to manipulate habenular activity in hopes of gaining precise understanding of the addiction process and generating new treatments for nicotine dependency. “We knew that this region plays an important role in nicotine addiction vulnerability,” she says. “Now, we better understand what’s going on there.”

When a smoker inhales, it takes but a moment for the nicotine to reach the brain. There it causes cells in the pleasure and motivation areas of the brain to release a burst of neurotransmitters, including dopamine, which triggers a rewarding sense of contentment and alertness in the smoker. What Ibanez-Tallon’s team discovered in their latest project is that a specific receptor called GPR151, found exclusively in habenular neurons, regulates the habenula’s sensitivity and aversion to nicotine. This finding suggests that small molecule modulators of GPR151 could be new tools for helping people overcome addiction.

What Flips the Addiction Switch?

To receive and respond to cues from the outside world, neurons employ special molecules on their surface called G protein-coupled receptors, or GPCRs. These receptors serve as conduits to

transmit incoming signals to the cell’s interior, producing a variety of cellular responses. Because they’re such good intermediaries, GPCRs are highly desirable targets for drug delivery.

Ibanez-Tallon and colleagues zeroed-in on a particular G protein-coupled receptor called GPR151 whose distinctive abundance in the habenula suggested it might play a role in nicotine response.

Moreover, GPR151 is exclusive to neurons in the habenula, a finding that the researchers were able to confirm in both mouse and human brain. They also found that GPR151 accumulates at the synapses formed between habenula neurons and other brain regions to which this structure communicates—suggesting that the receptor plays a critical role in conveying the actions of nicotine on the habenula to other parts of the brain. And experiments on mice that were genetically engineered to lack GPR151 verified that the receptor is indeed a key driver of nicotine addiction: when exposed to the substance, these mice showed less activation in habenula neurons than did normal mice.

How then might GPR151 affect the motivation to use nicotine? Ibanez-Tallon believes it might be involved in relaying an aversive reaction to nicotine. She and her colleagues found that this aversive effect—which after prolonged nicotine exposure sends the brain a “time to stop—you’ve had enough nicotine” message—was diminished in mice that lacked the receptor. As a result, these mice tended to self-administer greater doses of nicotine, which correlates with addictive behavior.

“Based on our findings, we are very confident that GPR151 can regulate nicotine dependence,” she says.

Nicotine continues to be the leading cause of preventable death in the United States even though cigarette smoking is at its lowest since the 1960s. Today the use of electronic nicotine delivery or “vaping” devices is alarmingly on the rise, especially among teens and young adults. And regardless of how people consume nicotine, most users will eventually try—and often fail—to stop.

The new findings raise the tantalizing prospect of altering the course of addiction with therapies targeting a specific brain area . “The next step,” Ibanez-Tallon says, “is to discover a chemical that binds to GPR151 and activates it. The hope is that we can develop new drugs to stop nicotine addiction at its source.”

Scientists have discovered a group of brain cells that may play a role in keeping smokers addicted to nicotine. Their work could ultimately lead to new drugs to help people conquer their tobacco dependence.