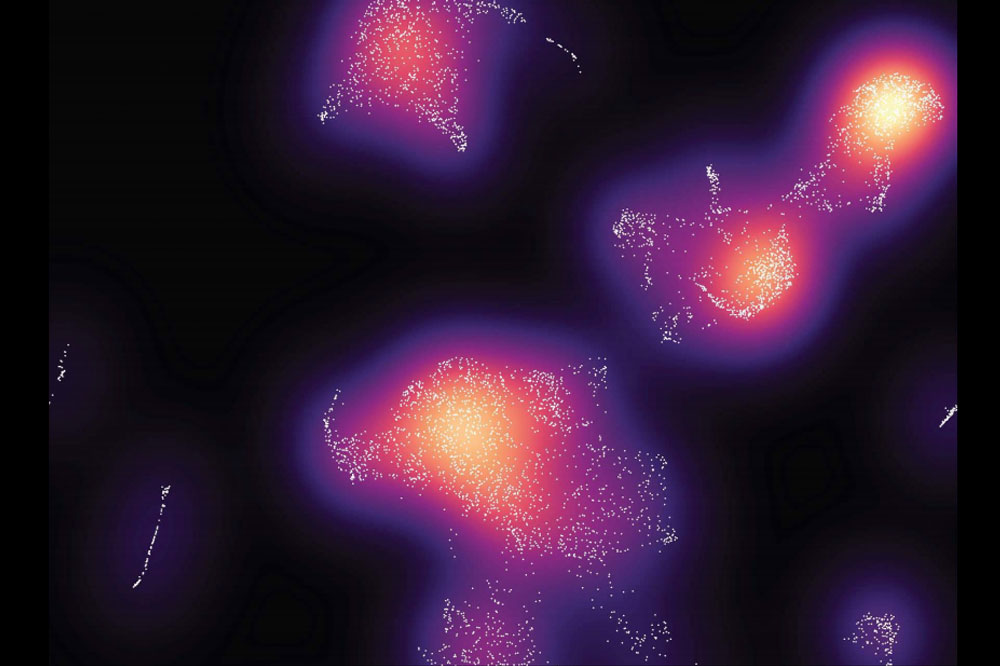 When researchers analyzed the immune cells in the tumors and grouped them by type (above), they found more cancer-fighting cells in mice with ApoE4.

Sometimes cancer stays put, but often it metastasizes, spreading to new locations in the body. It has long been suspected that genetic mutations arising inside tumor cells drive this potentially devastating turn of events.

Now researchers have shown for the first time that our own pre-existing genetics can promote metastasis.

A new study, published May 25 in Nature Medicine, suggests that differences in a single gene, carried within someone’s genome from birth, can alter progression of melanoma, a type of skin cancer. The researchers suspect these inherited variations may have the same effect on other types of cancer as well.

“Patients often ask ‘Why am I so unlucky? Why did my cancer spread?’ As doctors, we never had an answer,” says lead investigator Sohail Tavazoie, Leon Hess Professor and senior attending physician. “This research provides an explanation.”

The discovery may transform how scientists think about cancer metastasis, and lead to a better understanding patients’ risks in order to inform treatment decisions, Tavazoie says.

The mystery of metastasis

Metastasis occurs when cancer cells escape the original tissue to establish new tumors elsewhere, a phenomenon that leads to the majority of cancer deaths. Scientists have suspected that cancer cells, which initially emerge due to mutations inside normal cells, gain their travelling ability following further mutations. But after decades of searching, they have yet to find such a genetic change that could be proven to encourage metastasis.

Previous research in Tavazoie’s lab had identified a gene called APOE, present in the DNA of all of the body’s cells before any cancer arises, that can impact the spread of melanoma. The gene produces a protein that appears to interfere with a number of processes used by cancer cells to metastasize, such as forming blood vessels, growing deeper into healthy tissue, and withstanding assault from tumor-fighting immune cells.

Humans, however, carry one of three different versions of ApoE: ApoE2, ApoE3, and ApoE4. Benjamin Ostendorf, a physician scientist in the lab, hypothesized that these variants could explain why melanoma progresses differently in different people.

In experiments with mice possessing one of each of the versions of the gene, he and colleagues found tumors in those with ApoE4 grew the smallest and spread the least.

A closer look revealed that ApoE4 is the most effective version of ApoE in terms of enhancing the immune response to tumor cells. Compared to animals with other variants, the mice carrying ApoE4 showed a greater abundance of tumor-fighting T cells recruited into the melanoma tumor, as well as reduced blood vessels.

“We think that a major impact of the variations in ApoE arises from differences in how they modulate the immune system’s attack,” Ostendorf says.

Genetic data from more than 300 human melanoma patients echoed the mouse experiments: On average, people with ApoE4 survived the longest, while those with ApoE2 lived the shortest. This connection to outcomes suggests that doctors could look at patients’ genetics to assess the risk of their cancer progressing.

It could also influence the course of treatment. Melanoma patients are sometimes given therapy that encourages their own immune systems to better fight the cancer. The team’s analysis of information from such patients, as well as experiments with mice, showed that those with ApoE4 respond best to immune-boosting therapies.

Likewise, the researchers showed that an experimental compound that increases production of ApoE, RGX-104, was effective at helping mice with ApoE4 fight off tumors. RGX-104 is currently in clinical trials. (Tavazoie is a scientific cofounder of Rgenix, the company that developed RGX-104.)

Further research is needed to determine how to optimize treatments for patients with other ApoE variants, Tavazoie says. ApoE2, for instance, was associated with an increased risk of metastasis. The researchers evidence so far suggests that ApoE3’s metastasis-suppressing ability falls between that of the other two. “We need to find those patients whose genetics put them at risk for poor survival and determine what therapies work best for them,” Tavazoie says.

The implications may extend beyond cancer. Other studies have shown that variations in ApoE contribute to Alzheimer’s disease: ApoE4 aggravates risk of this neurodegenerative disorder, in contrast to its suppression of cancer progression.

“It’s not quite clear what ApoE does in Alzheimer’s, but we believe our work in cancer can inform our understanding of this disease as well,” Tavazoie says. His lab, normally focused on cancer, has begun investigating the connection to the neurodegenerative disorder.

The compound works by hindering a key pathway that cancer cells rely upon to hoard energy, and is already undergoing clinical trials.

A new treatment may help cancer patients who don't respond to traditional immunotherapy. Findings from the first-ever clinical trial reveal that it is effective in activating immune cells that kill cancer cells.

Studying fruit flies, researchers ask how a single brain chemical can orchestrate diverse functions such as learning, motivation and movement.

The ongoing clinical trial of RGX-104 is sponsored by Rgenix, a company of which Masoud and Sohail Tavazoie are scientific cofounders. The lab research was supported by a Faculty Scholar grant from the Howard Hughes Medical Institute, a Collaborative Scholars and Innovators award from the Department of Defense, a Pershing Square Sohn award, a Breast Cancer Research Foundation grant, the National Institutes of Health and the National Cancer Institute, and a Deutsche Forschungsgemeinschaft postdoctoral fellowship.