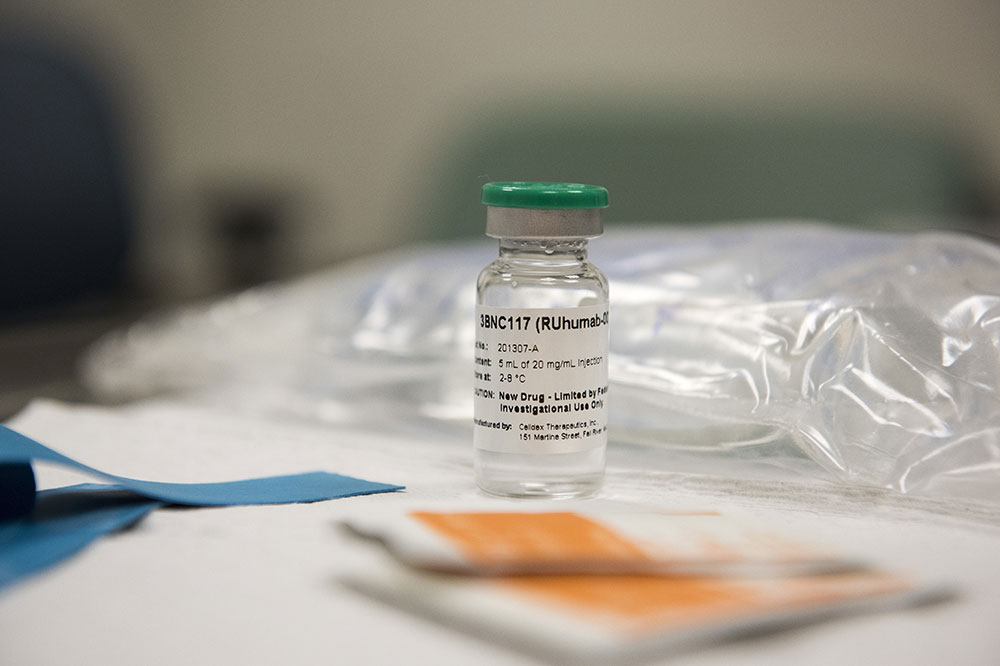 Scientists hope that the new drugs will make it possible to not just suppress HIV, but effectively cure it.

In a move that could help realize the promise of new strategies to control HIV, Rockefeller has entered a licensing agreement with a global pharmaceutical company to advance the development of investigational drugs based on broadly neutralizing antibodies discovered at the university. In a recent early-stage study, two of the licensed compounds were shown to suppress the virus for months at a time in infected people and could yield new approaches for preventing and treating the disease.

Under the agreement, the company, Gilead Sciences, obtains rights to investigate these potential applications in clinical trials and potentially commercialize those that are successful. According to Michel C. Nussenzweig, who led research on the broadly neutralizing antibodies together with associate research professor Marina Caskey, such investigations will also advance scientists’ understanding of how the agents work.

“It remains to be established precisely how the antibodies interact with the human immune system, but preclinical and clinical studies suggest they might be ‘teaching’ it to go after the virus,” Nussenzweig says. If confirmed, this would open the door to the tantalizing prospect of novel treatments that don’t just suppress HIV but effectively control it by rendering immune cells capable of fighting the virus. The scientists hope that such treatments might make it possible to suppress the virus long term, without the need for taking daily HIV medications.

Broadly neutralizing antibodies were discovered by Nussenzweig’s team in studies of “elite controllers,” people whose immune systems have a rare ability to fight off the virus. The lab subsequently developed techniques to clone these unique molecules, making it possible to produce them in the lab and administer them to patients.

The antibodies have several potential advantages over antiretroviral drugs, the current standard for HIV treatment, Nussenzweig says. They are delivered by injection into a vein, and a single injection might be enough to neutralize the virus for a long time. By contrast, antiretrovirals need to be taken daily, posing problems in many parts of the world where adherence to a daily-pill regime is challenging. When people with HIV don’t take their antiretrovirals as prescribed, they may develop health complications and also pose a risk to their partners and communities.

Nussenzweig, who is Rockefeller’s Zanvil A. Cohn and Ralph M. Steinman Professor, hopes that broadly neutralizing antibodies will also prove useful for HIV prevention and offer an alternative to the pre-exposure prophylaxis (PrEP) pill, which like antiretroviral drugs requires daily doses. “People often start taking PrEP but then quit because of the side-effects or other reasons,” he says. “Prevention with antibodies, on the other hand, might only require you to get an injection once or twice a year, making it easier to contain the spread of HIV.”

Jeanne Farrell, Rockefeller’s Associate Vice President for Technology Advancement, says the agreement with Gilead represents the culmination of years of work aimed to help ensure that the discoveries made in Nussenzweig’s lab will ultimately benefit people around the world, including those in developing countries. “Partnering with commercial stewards capable of advancing academic programs into medical products is how we ensure that this and other promising discoveries realize their potential to transform healthcare,” she says.

Research on the antibodies was funded by the Bill and Melinda Gates Foundation, as well as by the Robertson Therapeutic Development Fund. Rockefeller adheres to the Gates Foundation’s global access policy which aims to ensure that drugs and other commercialized technologies are delivered at low cost to those needing them the most.

Gilead, a research-based biopharmaceutical company, has an extensive portfolio of HIV drugs; it is projected that more than 12 million people living with the disease currently take one or more of its products. The company has acquired Rockefeller’s full portfolio HIV antibodies, including two called 3BNC117 and 10-1074 currently in clinical development. Under the agreement, the university retains rights to further investigate the compounds in lab experiments and early-stage clinical trials.