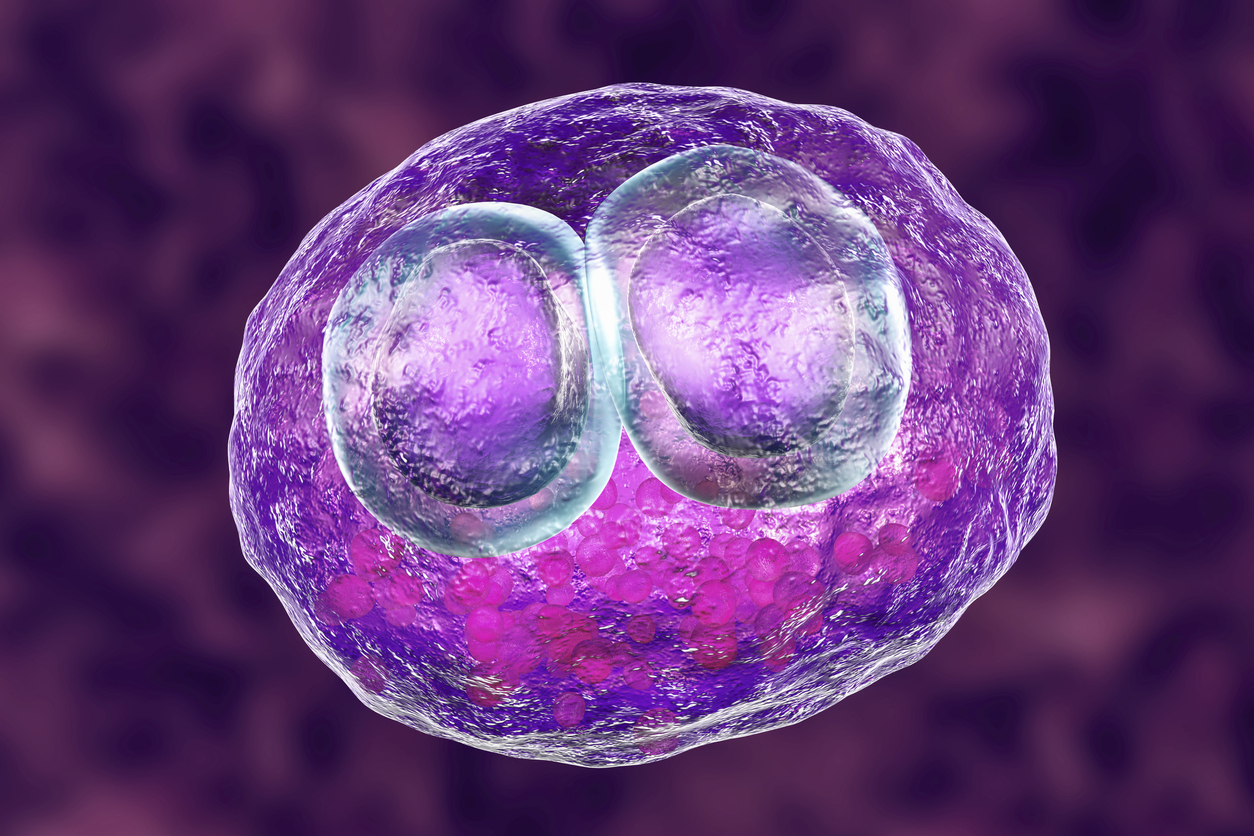 An illustration of the “owl’s eye,” an appearance typically seen in cells infected by cytomegalovirus.

It can turn the nuclei of human cells into kidney-shaped blobs, but it’s unlikely that you would have noticed anything when it infected you.

Sometimes called the “stealth virus,” cytomegalovirus (CMV) is extremely common, affecting up to 90 percent of adults. But for the vast majority of individuals, whose immune systems function normally, it’s harmless—or at worst causes a fever or sore throat.

There are, however, extremely rare cases of people who develop a severe, even deadly CMV infection, despite having an immune system that properly controls other microbes. Now, studying one such case of a 54-year-old Iranian man, scientists have found a rare genetic variation that may explain how this common virus can become fatal.

The findings, published in The New England Journal of Medicine, add to an emerging view of infectious diseases that doesn’t focus solely on the pathogens but also considers minute genetic variations in the host. “An unexpected life-threatening infectious disease that is not explained by a compromised immune system often turns out to be a genetic disorder,” says lead investigator Jean-Laurent Casanova, head of the St. Giles Laboratory of Human Genetics of Infectious Diseases at Rockefeller University.

A one in a million case

In nearly everybody else, the immune system is capable of controlling the virus before it takes hold.

But in the case of an otherwise healthy Iranian man, the virus proved unexpectedly deadly. Davood Mansouri, a professor at Shahid Beheshti University of Medical Sciences in Tehran and the patient’s doctor, called Casanova about the mysterious case: Although the patient received treatment and appeared to have a functioning immune system, his condition continued to worsen. Two and a half years after his initial diagnosis, he died of respiratory failure.

Mansouri, a longtime friend, knew Casanova would want to investigate. A life-threatening CMV infection, scientists estimate, affects only one in a million healthy people—it’s so rare that researchers have hardly ever had a chance to study it.

“A 50-year-old individual who would die in a couple of years of primary infection by CMV? I had never encountered such a case and had not even heard of it,” Casanova says.

An inborn error of immunity

To find an explanation, the researchers sequenced the man’s protein-coding genes, or exomes. They found variations in a few genes but only one stood out: a mutation in NOS2, resulting in a shortened and nonfunctional version of an enzyme known as nitric oxide synthase or NOS2.

Although the role of NOS2 in human immune response is not well known, Casanova immediately knew this was not a coincidental finding. Another scientist he had known for many years, Carl F. Nathan at Weill Cornell Medicine, had pioneered the study of NOS2 in mice. Nathan had shown it is a critical component of macrophages, the immune cells that kill microbes. Mice without NOS2 are highly susceptible to the mouse version of CMV.

Based on these findings, Casanova and his colleagues suspect that a lack of NOS2 explains why the patient was not able to control the virus–similarly to mice, humans may need NOS2 to fight off CMV.

The findings may eventually lead to new treatments for severe cases of CMV, as well as to genetic screening approaches to identify people who are vulnerable to a virus that they will almost certainly encounter at some point in their life. The discovery also adds another example to the growing group of so-called inborn errors of immunity, the genetic variations that affect a person’s ability to fight off an infectious disease. Scientists have so far identified over 400 such genetic errors, which are thought to have occurred randomly in the course of evolution.

“It’s the occasional price we pay for the genetic diversity that has fueled the variety of life,” Casanova says.

The New England Journal of Medicine

Fatal Cytomegalovirus Infection in an Adult with Inherited NOS2 Deficiency