New clues about why a universal flu vaccine is so elusive 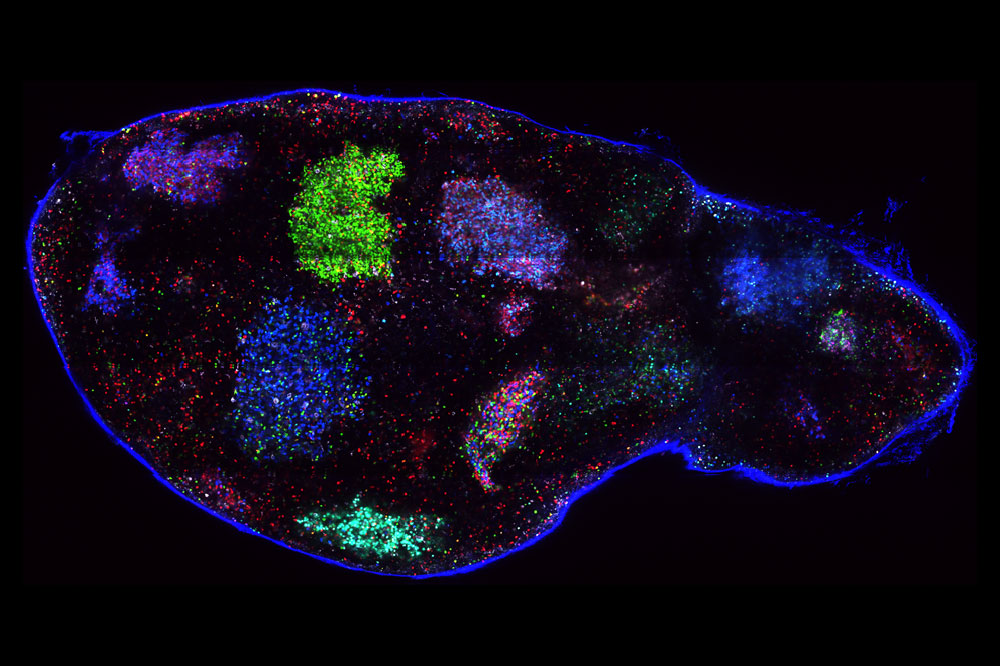 A mouse lymph node six weeks after influenza infection. Activated B cells are marked with different fluorescent colors and cluster into germinal centers.

Every year, we’re reminded to return to the pharmacy for a flu shot. Why can’t we have a flu vaccine that offers long-term protection, like those for measles or polio? That’s because the influenza virus continuously evolves, so the immune response we build up one year might not work the next year—or even on the version of the flu you catch the same year. As a result, the virus remains dangerous: Last year, it caused more than 60,000 deaths in the United States alone.

New findings, published in Cell, reveal why making a general-purpose vaccine that guards against all versions of the flu is so hard: Instead of improving its memory of the previous version of virus, the immune system develops its response to the new virus variant from scratch, mostly using immune cells that have no memory of the virus.

“If we can figure out how to help the immune system to keep building on what it has already learned, we could develop better vaccines for highly evolving viruses like the flu, or HIV, or Hepatitis C,” says Gabriel D. Victora, assistant professor at Rockefeller.

Victora and his team explored the behavior of immune cells in mice after a first and second exposure to a flu vaccine. Specifically, they looked at B cells, white blood cells that release antibodies. Antibodies are proteins that respond to invaders such as viruses by attacking them or tagging them for attack by other cells. During an infection or immunization, B cells enter so-called germinal centers in the lymph nodes, where they mutate many times until they evolve to target the new invader.

“A germinal center is like a boot camp,” says Victora. “They go in very bad, they come out very good, releasing better antibodies that bind more tightly to their targets.”

Those very good B cells are the immune system’s cellular memory and can release antibodies that latch on to one part of the virus. Ideally, these B cells would return to the germinal centers the next time the body is faced with a virus or vaccine, and evolve even more sophisticated antibodies to target the slightly different version of the virus even better, ultimately becoming able to produce the so-called broadly neutralizing antibodies that the virus can’t escape from. And that’s what researchers need in order to make a universal vaccine.

“The idea is you would keep calling memory cells back into germinal centers by repeated vaccination,” Victora says, “in order to make them evolve several times until they become the super B cells that you need to give you a universal flu vaccine or an HIV vaccine.” But instead of seeing the B cells return, the researchers found something different.

They genetically marked the mice’s germinal centers with fluorescent colors during the first vaccination so they could track the behavior of their descendants during the second vaccination. To their surprise, more than 90 percent of the B cells that entered the germinal centers on the second vaccination were uncolored—a sign that they were newcomers. A genetic analysis also revealed these cells hadn’t gone through the mutation process that germinal center B cells typically undergo, further suggesting they were present in that site for the first time.

The boot camp veterans, however, were mostly absent. Out of the hundreds of types of B cells that entered the germinal centers on the first vaccination, only a few made it back the second time, despite many of them being able to bind to the virus. It appears that coming back a second time is reserved only for a chosen few B cells.

This finding, if further studies show is also the case in humans, has implications for vaccine design. In order to arrive at strong B cells, researchers need to understand what is blocking the cells from returning to camp. “If we can understand these bottlenecks that don’t allow these cells back in, that might help us to find a way to circumvent them, making it easier for repeated vaccination approaches to work,” Victora says. This would give the cells the chance to undergo the many rounds of mutations they need in order to arrive at antibodies that target all variants of a virus like flu or HIV.