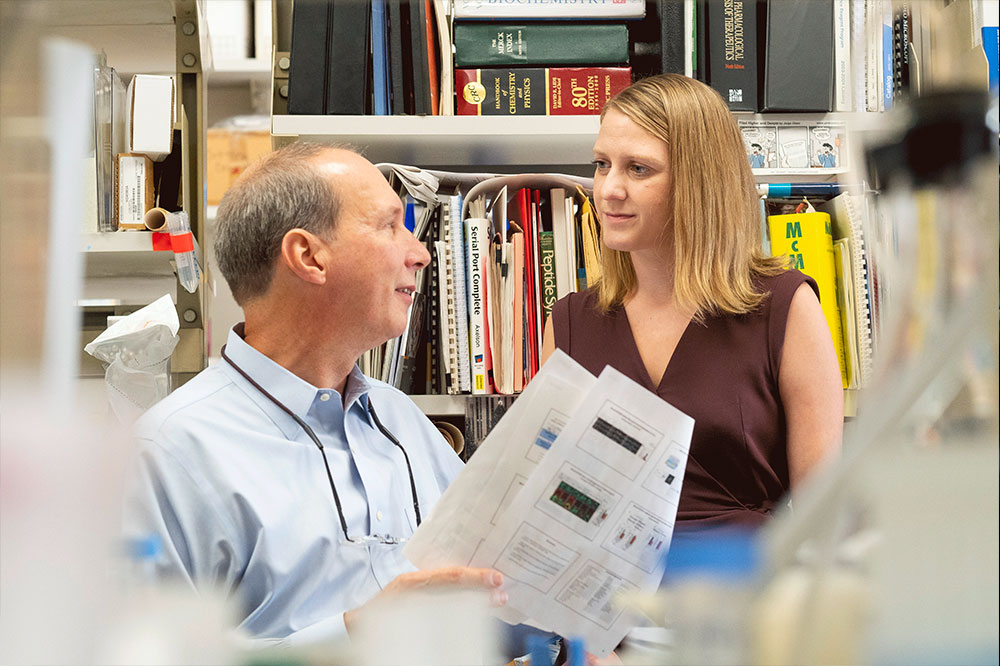 For sugar to taste sweet and for coffee to be stimulating, or even for light to be seen, first they all need to land on a G protein-coupled receptor. Ubiquitous and diverse, these receptors are a cell’s chemical detection system: they sense substances in the surroundings and initiate intracellular pathways that underlie virtually all physiological processes—from taste and vision to hormonal regulation and neuronal communication. Nearly a third of all therapeutic drugs act by binding to these cell-surface receptors.

Yet finding more drug targets among this group has been difficult, and new research might explain why. Rockefeller scientists have found that many of these receptors, of which there are nearly 800, interact with so-called receptor activity–modifying proteins, or RAMPs, making them take up different configurations inside the body than in the lab.

The finding was made possible by a new technique that can examine hundreds of receptors at once to reveal previously unknown RAMPs affecting their structure and function. Insights from this research, described in Science Advances, could have significant implications for drug discovery and help researchers understand a number of diseases.

Although widely studied, G protein-coupled receptors still prove elusive. Many drugs that successfully target them in preclinical studies ultimately fail in human trials. And for over a hundred of these receptors, scientists have not even been able to identify what hormone or protein in the body they bind to.

“One hypothesis is that some component is missing,” says Thomas P. Sakmar, the Richard M. and Isabel P. Furlaud Professor and head of Rockefeller’s Laboratory of Chemical Biology and Signal Transduction. “That component could be the RAMP.”

RAMPs were discovered serendipitously 20 years ago when a team of researchers working on a G protein coupled receptor, or GPCR, encountered a strange problem: the same receptor expressed in two different cell lines bound to different compounds. This variation, the researchers found, was explained by an accessory protein present in one cell line and not the other.

Today there are three known RAMPs that form complexes with GPCRs, leading to a change in the receptor’s configuration and therefore its affinity for a hormone or drug. Previous research found this to be true for a handful of GPCRs, but scientists suspected that when it comes to RAMPs, they were only seeing the tip of the iceberg.

For instance, RAMP mutations are linked with several diseases and deleting them in mice leads to a wide range of outcomes. “Different lines of evidence suggest they interact with a lot more GPCRs than we have appreciated,” says Emily Lorenzen, a graduate student in Sakmar’s lab.

Lorenzen’s own studies, published in 2017 and 2019, confirmed this suspicion, so she decided to take a closer look.

With three RAMPs and 775 receptors, searching through all the possible combinations is a daunting task. Lorenzen knew she had to develop an assay to simultaneously screen a large number of proteins and their potential interactions.

The idea sent her to Sweden for a collaboration with scientists at the Karolinska Institute, KTH Royal Institute of Technology, and Science for Life Laboratory. The team obtained antibodies from the Human Protein Atlas project that they coupled to magnetic beads, and then incubated with a liquid mixture of cells engineered to make a combination of both a RAMP and a receptor.

The beads come pre-colored with 500 different dyes, and the RAMPs can be detected with a second, fluorescent antibody. As the beads pass through a detection instrument in a single file, their color IDs are read and their associated receptors and RAMPs are identified.

In the Science Advances article, the team presents their findings from testing the technique on 23 GPCRs. The results not only validated known interactions, but also revealed previously unidentified RAMP interactions in additional receptors.

“I would have been happy to even just find one or two new interactions,” Lorenzen says. “Instead we got about a dozen or so.”

Inspired by this success, the team is applying the technique to the rest of the receptors with the goal to map their interactions with all the three RAMPs, “creating the entire GPCR-RAMP interactome,” Sakmar says.

So far, the findings have been consistent: the GPCR-RAMP interactions are much more widespread than previously thought, a finding that has important practical implications. “When studying GPCR pharmacology, you have to consider the status of the RAMP in your system,” Sakmar says. “The actual target of a drug might be the GPCR-RAMP complex in the cell membrane, not the receptor in isolation.”

He has already put that idea into practice. His team is re-evaluating a small subfamily of receptors involved in immune diseases, previously studied as important drug targets. “We think we know why previous drug discovery efforts haven’t been successful,” Sakmar says. “There is a RAMP interaction that no one has appreciated.”

The team also hopes to solve the curious case of glaucoma, thought to be caused by mutations in RAMPs. These mutations have been bewildering to scientists since the RAMPs by themselves appeared to play no role in the disease. Sakmar’s team is now taking a new look at glaucoma and a few similarly puzzling diseases to find whether a GPCR interaction might be the missing link.

Bringing RAMPs into the picture may also solve the mystery of about a hundred so-called orphan receptors, which are activated by unknown proteins. “Going forward, we’re going to focus on finding what these orphan GPCRs bind to,” Lorenzen says. “I hope this will encourage other people to look into it as well.”

Researchers have discovered a new compound that helps fortify the intestine's inner lining, which becomes porous in inflammatory bowel diseases.