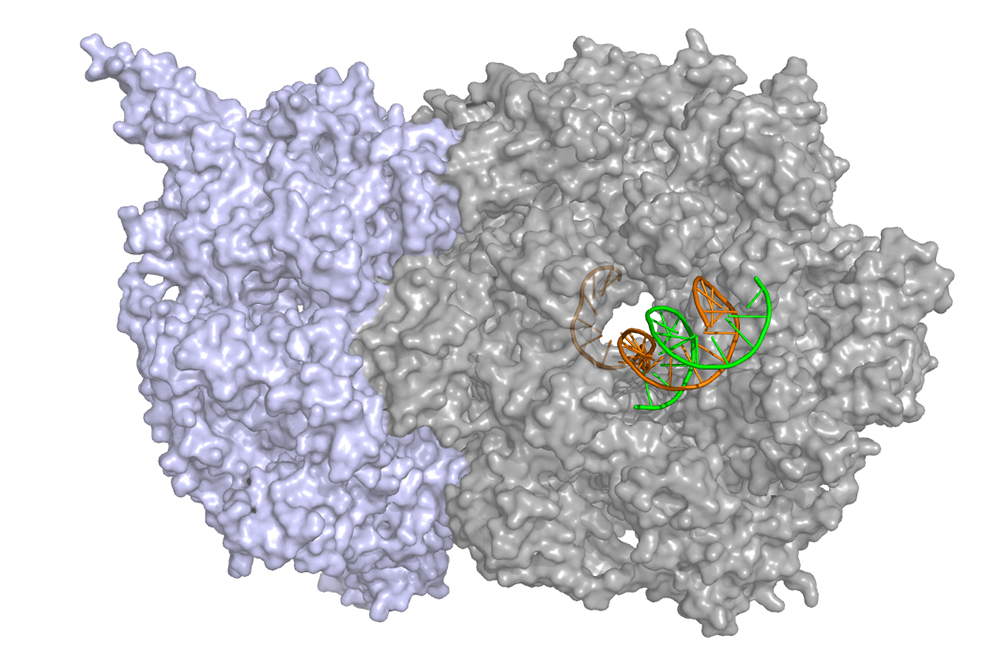 CMG helicase (grey) forms a ring that surrounds DNA and “unzips” the molecule as it slides along its length.

The body’s cells are constantly dividing—which, somewhat counterintuitively, means that they’re constantly multiplying. Because when a cell divides it doesn’t split into two useless halves, but rather into two fully functional cells.

For this scheme to work, a cell must first make a copy of its DNA so that each ensuing “half” has access to the necessary genes—an operation that after decades of research remains incompletely understood.

Now, a team of Rockefeller scientists have gained key insights into how this process works with the help of new and highly precise technology. Reported in Cell, their recent studies of an enzyme critical to DNA replication elucidates previously confounding aspects of the cell-division process and might one day advance research on diseases like cancer.

Fork in the road

Most of the time, DNA consists of two complementary strands that wrap tightly around one another to form the molecule’s signature double-helix shape. Yet this conformation, however elegant, does not lend itself to replication. Before DNA can be copied, its two strands must be “unzipped” by the enzyme CMG helicase, which slides along a single strand, separating it from its partner in the process.

“Because CMG helicase is required for this unzipping, it’s one of the most fundamental enzymes on Earth,” says Michael O’Donnell, the Anthony and Judith Evnin Professor.

Still, CMG is not the only piece of cellular machinery acting on DNA during cell division. In fact, DNA replication involves a whole team of molecules, collectively called a replisome, that perform different tasks to ensure faithful reproduction of the genetic script. On the other hand, when things go awry, an army of repair enzymes is responsible for fixing bits of damaged or incorrect DNA. They exert their action on a region called the replication fork, which happens to be the same site where CMG does its work.

It’s a crowded arrangement, and researchers have spent many years trying to understand its logistics. A strand of DNA is rather narrow, O’Donnell explains, so if repair enzymes are sitting on the replication fork, then there isn’t much room left for a helicase.

O’Donnell and Shixin Liu, an expert at visualizing single molecules in action, put their minds together to answer a basic question: When repair enzymes swoop in to fix damaged DNA, where in the world does the helicase go?

To find out, the researchers analyzed the interaction between DNA and CMG helicase using a technology called “optical tweezers.” It involves suspending a single DNA between two beads to which the two ends of DNA are attached and applying tension such that the DNA molecule begins to unravel—effectively creating a replication fork. In recent years, this type of nanoscale manipulation has dramatically expanded scientists’ ability to probe various aspects of cell replication and gene transcription, making it an ideal tool for studying CMG.

Combining optical tweezers with fluorescence microscopy, the researchers were able to observe how the helicase binds to, moves along, and dissociates from DNA. In doing so, they uncovered surprising insights into the enzyme’s structure and function.

Optical tweezers hold onto DNA like a piece of string held taut between two hands. And, according to common understanding, CMG wraps around DNA like a ring. Barring some magician’s sleight-of-hand, there is no way to get a ring around a piece of string without letting go of one its ends. Yet, the researchers observed, when CMG is in a solution with tweezed DNA, the enzyme somehow manages to wrap itself around a single strand of the molecule—a finding that led the researchers to reevaluate their understanding of the enzyme.

“The only way that this could happen is if the ring opens and closes again to encircle DNA,” says Liu. “So that was the first clue that led us to suspect that CMG has a small gate that does just that.”

Additional experiments confirmed that such a gate opening indeed exists in CMG, and that it’s vital to seamless cell division. The researchers propose that when CMG needs to vacate the replication fork, it simply opens its gate, hops off its current position on the DNA strand, and moves over to an unoccupied section. When the repair is completed, the enzyme then opens its gate again, hops back over to its previous position, and resumes its business.

In addition to elucidating fundamental details of the DNA-replication machinery, these findings could potentially hold implications for understanding and treating diseases, including cancer. “CMG mutations have been implicated in multiple cancers,” says Liu. “So understanding how this enzyme works could eventually lead researchers to new drug targets.”