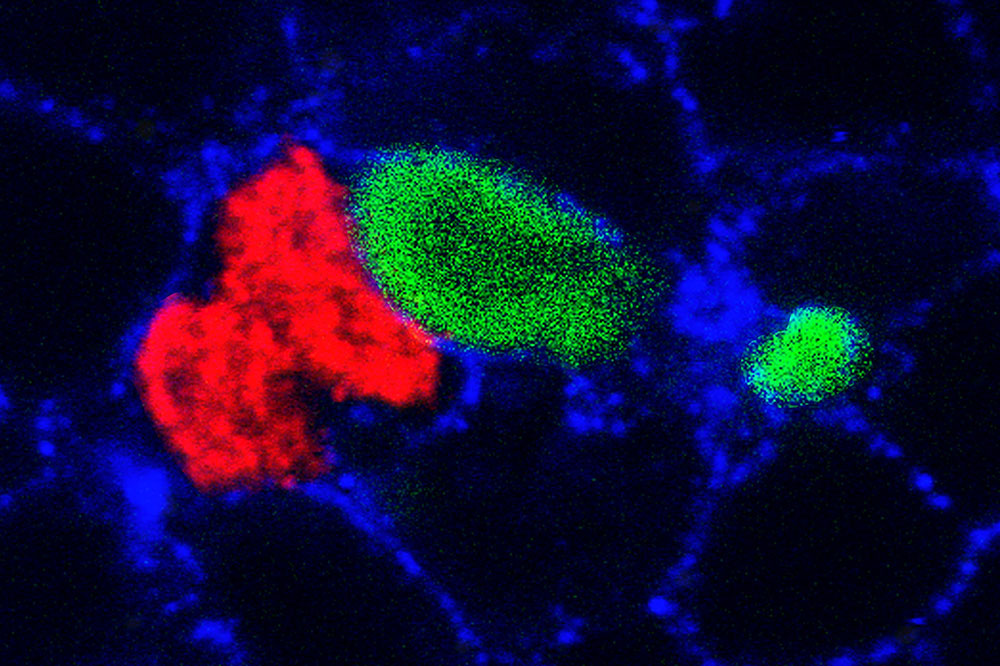 In developing skin, “loser” cells die when they come into contact with “winner” cells. Here, a winner (red) engulfs a loser (green) following its demise.

Not all cells are destined for greatness. Deemed unfit to serve in the body, some are killed off during early development through a process called cell competition. This phenomenon has previously been documented in flies and is now turning out to occur in mammals as well.

In a recent study, described in Nature, Rockefeller scientists showed that skin cells in mice engage in two forms of competition, one taking place during early embryonic development and the other occurring just before birth. The researchers believe that this cutthroat cellular conflict is crucial to the cultivation of healthy skin.

The winner takes it all

In the wings of developing fruit flies, cells that divide slowly—so-called “losers”—die when they come into contact with more rapidly dividing “winners.” Though this process has been extensively studied, scientists remained unsure about what purpose it might serve, and whether cell competition is limited to the insect world.

Taking up these questions, researchers in the laboratory of Elaine Fuchs, the Rebecca C. Lancefield Professor, began searching for evidence of competition among epithelial cells of developing mice. They created a population of losers by manipulating genes that slow the pace of cell growth and labeled these cells with green fluorescence. They then labeled winners with red fluorescence, allowing the team to monitor survival in the two populations.

Loser cells, the researchers found, died at a disproportionate rate compared to winners.

“We saw that the losers were proliferating slower, but in order to really call it competition we had to show that they were being actively eliminated by the winners,” says postdoctoral fellow Stephanie Ellis. “So we made movies to track interactions between the cells.”

The recordings revealed that losers cells surrounded by winners were much more likely to die than those that hung out with other losers—an indication that the two groups were indeed competing.

Next, the scientists asked whether the cellular antagonism they observed persists later in development. Mammalian skin starts out as a single layer and acquires additional layers over the course of development, ultimately forming a sturdy, stratified barrier that protects the inside of the body from the outside world.

In their first set of experiments, the researchers observed cell death only in the early monolayer tissue. This finding, however, did not convince Ellis that competition was completely absent in more mature skin.

“I thought, perhaps multilayer tissues use a different method to get rid of loser cells,” she says. “And that’s exactly what we saw.”

The scientists also showed that when competition is disrupted, skin develops more slowly and forms a less effective barrier. This is the first study to demonstrate that competition is vital to healthy tissue development—a finding that, Ellis says, could have clinical implications.

“If you have a barrier disorder—a wound healing defect, for example—then promoting better competition could lead to faster restoration of barrier function and faster healing,” she says.

“Our research is also consistent with cancer studies showing that healthy cells often eliminate cells with oncogenic mutations, and prevent them from developing into cancers,” adds Fuchs. “In this case, healthy cells start out as the winners. Eventually, however, a more fit cancer cell emerges that is endowed with weapons to better compete with normal tissue cells—giving the cancer cell winner status.”

Fuchs’ team is currently exploring how healthy stem cells lose their competitive advantage, with the hope that cell competition could be harnessed to develop therapeutic tactics for killing off cancer cells.