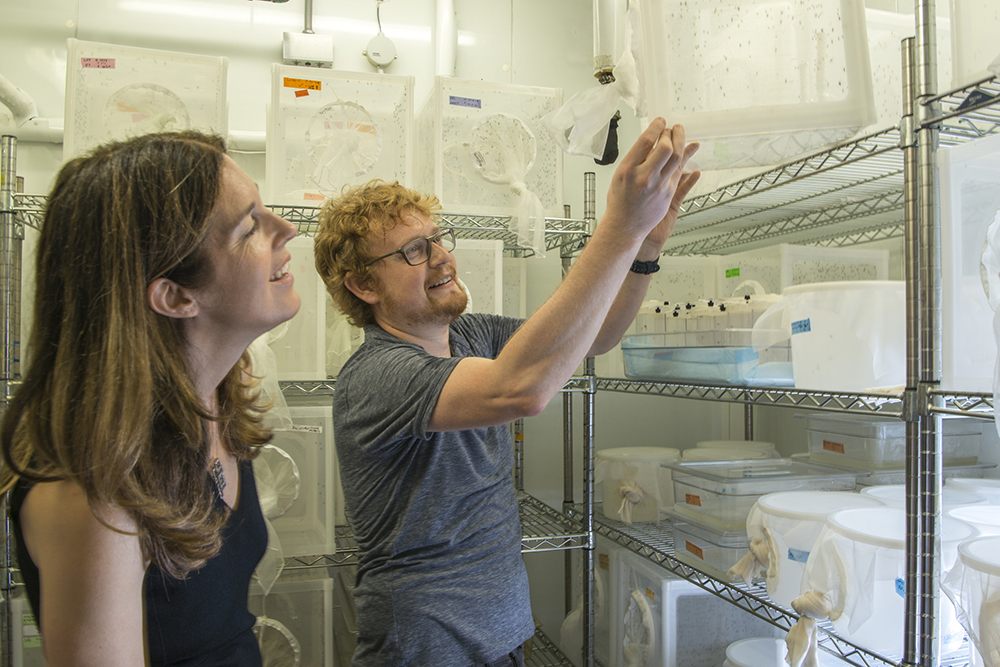 The mosquito Aedes aegypti is a powerful, plentiful species: It populates six continents, can carry deadly viruses, and bites with abandon. But until recently, its genome was in tatters.

For the past decade, researchers attempting to study the mosquito’s DNA had only fragments to work with—genetic swatches that didn’t come together to form a cohesive whole. However a recent multi-institutional study, led by Rockefeller scientists, has produced a new blueprint of the Aedes aegypti genome that vastly improves upon its predecessor. The study, published in Nature, describes important applications of this resource, including multiple strategies for reducing mosquito-borne illnesses.

Like several other mosquito species, Ae. aegypti carries pernicious pathogens, including Zika, dengue, and yellow fever, and transmits these diseases to hundreds of millions of people annually. Many researchers believe that the best way to curb infection is to better understand the infectors, and in 2007, scientists took a first stab at sequencing the mosquito’s genome. Although the project produced valuable data, it soon became clear that more work—using more advanced technologies—was needed.

“The genome was in so many pieces that we weren’t sure how they fit together, and we also weren’t sure that it was complete,” says Ben Matthews, a research specialist in the lab of Leslie B. Vosshall. “And if you can’t trust that the DNA sequence was correctly assembled, you’re not going to get very far.”

Rockefeller scientists weren’t the only ones impeded by dubious DNA data. Matthews recalls meeting mosquito researchers from other institutions whose projects had become excessively time consuming, or outright impossible, due to a lack of reliable genetic information. Following the 2016 Zika outbreak, scientists’ frustration escalated as the disease became a public health crisis. And Vosshall, the Robin Chemers Neustein Professor, decided it was time to take action.

“I was sick of hearing that my lab members couldn’t find complete versions of the genes we were working on,” she says. “So I took my frustration to Twitter, and assembled the Aedes Genome Working Group.”

Vosshall ultimately recruited 72 coauthors from universities across the world, as well as corporate partners who donated their technology and expertise. The team first sent a sample of Ae. aegypti DNA to the company Pacific Biosciences, whose methods rendered genetic sequences that were much longer than those from the 2007 study. Next, scientists at Bionano Genomics determined how those long sequences fit together, and researchers at Baylor University determined how the sequences were arranged on whole chromosomes.

The three-year-long collaboration yielded a comprehensive catalog of Ae. aegypti DNA—a genome as robust as the species from which it came. And the group wasted no time putting their new tool to work.

Equipped with a high-quality genome blueprint, the researchers were able to characterize previously unidentified genes. They found, for example, genes coding for dozens of new ionotropic receptors (IRs), which detect odors in the environment and help guide mosquitoes toward important locations, such as a site to lay eggs, or a naked kneecap ripe for nibbling. Armed with new genetic details about IRs, researchers may now be able to develop novel insect repellants that interfere with mosquitoes’ ability find and bite us.

In analyzing the genome, the researchers also noticed that some mosquitoes had multiple copies of genes that code for glutathione S-transferase (GST), an enzyme that neutralizes the toxic effects of insecticides. This finding, says Matthews, suggests that Ae. aegypti are evolving to protect themselves from man-made toxins by bulking up on genes that destroy chemicals designed to kill them. This discovery could help researchers create chemicals that eliminate mosquitoes resistant to existing insecticides.

A more environmentally-friendly strategy by which to combat disease-carrying bugs involves not killing them outright, but rather tinkering with their genes in ways that make them less threatening to humans. And, the researchers report, their new genome study offers several ideas for how to accomplish such genetic tweaking.

The first involves a bit of sex discrimination. Only female Ae. aegypti feast on blood; therefore, a reduction in females entails a reduction in virus transmission. Consulting the new genome, the researchers were able to pinpoint genes responsible for determining the sex of a mosquito, a finding that could be used to engineer male-only populations. And, as Matthews puts it: “No females, no biting, no disease.”

Still, not all female mosquitoes carry viruses. Researchers were aware, for instance, that some Ae. aegypti cannot be infected by the dengue virus, and therefore cannot transmit it to humans. Using the new genome, the team was able to determine the location of genes that control susceptibility to the virus. And with further research, scientists may be able to alter Ae. aegypti DNA in ways that render the species incapable of spreading the disease.

A sequence of improvements

These findings highlight only a tiny fraction of the genome’s potential applications. The Vosshall lab is actively using this tool to perform new experiments—and they’re not alone. A year prior to formally publishing their study, the group released their genome online. And almost immediately, scientists across the world started incorporating the data into their research.

“Once the genome was publicly available, people started digging into it,” says Matthews. “Dozens, if not hundreds, of labs have already used it in their work, and that number will only grow with the publication of our paper.”

This research has the potential to assist not only scientists studying mosquitoes, but also those attempting to improve the quality and availability of genomic resources for diverse species.

“In addition to getting the best genome for Ae. aegypti, we’ve also made a roadmap for how to assemble other tricky genomes.” says Matthews. “This study lays out a strategy for taking any organism and turning it into a genetically tractable animal. And I find that really exciting.”

New research shows that mosquitoes sense repellent through their legs

Scientists made the surprising discovery that the insects’ displeasure for touching DEET, the active ingredient in many repellents, helps prevent bites.

Scientists have learned new tricks that could be useful in preventing mosquito-borne illnesses such as Zika and yellow fever. A new study shows that some appetite-reducing drugs can curtail the insects’ impulse to feed on warm-blooded hosts.

Victor Wilson, a neurophysiologist who traced the intricate neural mechanisms that govern our balance and posture, died on January 20 at the age of 92.