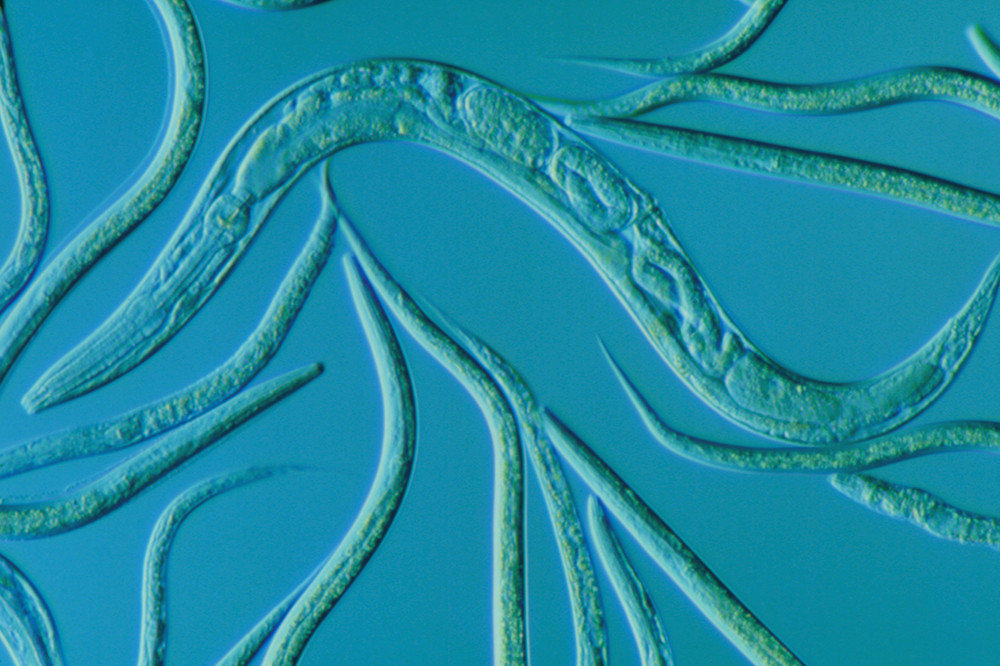 The innate system that controls behavior in worms is not entirely inflexible, allowing some individuals to stand out from the crowd.

Put 50 newborn worms in 50 separate containers, and they’ll all start looking for food at roughly the same time. Like members of other species, microscopic C. elegans roundworms tend to act like other individuals their own age.

It turns out that the innate system that controls age-appropriate behavior in a developing worm is not entirely dependable, however. Despite sharing identical genes and growing up in similar environments, some individual worms will inevitably march to the beat of their own drum.

New research from Rockefeller University illuminates the biology that guides behavior across different stages of life, and also suggests how variations in specific neuromodulators in the developing nervous system may lead to occasional variations. The work, led by Cori Bargmann, is made possible by a newly engineered system that allows scientists to record behavioral information for individual worms over an entire lifecycle. It is published in Cell.

“There are patterns at every stage of life that are different from the patterns at other stages, and with the system we created we can see that really clearly in ways that are surprisingly complex and robust,” says Bargmann, who is the Torsten I. Wiesel Professor and head of the Lulu and Anthony Wang Laboratory of Neural Circuits and Behavior. “We can also observe something as complex as individuality and start to break down the biology behind it.”

Our understanding of how genes govern behavior comes largely from experiments that involve altering a subject’s normal state with external stimuli over a short period of time, such as giving a mouse some cheese as a reward for completing a maze. We know less about how genes affect behavior as animals go about their normal routines.

Shay Stern, a postdoctoral associate in Bargmann’s laboratory, engineered a system to capture spontaneous, internally-generated behavior in worms over the span of their entire development, which totals about 50 hours. The scientists focused on foraging behavior—the worms’ roaming movements in search for food—and found incredibly similar patterns of activity between individuals.

The activity patterns of individual worms were similar throughout development, with some exceptions.

“Even though the worms were separated and not receiving external cues, they were actively searching for food at the same time point in development as other worms,” says Stern. “And we saw very precise differences in foraging behavior at each stage of development.”

By creating genetic mutations in some worms, the researchers were also able to identify specific neuromodulators, or chemical messengers in the brain, that normally keep the animals on schedule. A mutation that disrupted the chemical messenger dopamine, for example, affected the worms’ roaming speed during late development. Other mutations affected behavioral patterns within each developmental stage, suggesting that different neuromodulators influence behavior over different timescales.

While the majority of worms conformed to the same behavioral patterns, a number of individual worms stood out for their atypical foraging behaviors. Variability between individuals is typically attributed to genetic differences or exposure to different environments, but the researchers designed this study to account for these differences, using genetically identical worms in identical environments.

One explanation for these individual variations could be small differences in how the nervous system develops. There is a randomness factor in how some neurons connect with each other that isn’t controlled by genetics, notes Bargmann.

But Bargmann and colleagues showed that neuromodulators can also contribute. The researchers found that removing the chemical messenger serotonin from a population of worms drastically reduced the number of worms that displayed unique roaming patterns, or individuality. Indeed, without serotonin, all of the worms exhibited the same foraging behavior at the same time—a finding that suggests how important individuality is to survival.

“From an evolutionary point of view, we can’t have everyone going off the cliff all at once like lemmings—someone’s got to be doing something different for a species to survive,” says Bargmann.

Inside the brains of hungry worms, researchers find clues about how they hunt

When looking for food, the roundworm C. elegans searches the same area for up to 20 minutes before trying its luck at more distant locales. New research on the worm’s brain explains how this behavior arises at the level of molecules and cells.

Studying neurons in C. elegans, researchers made a surprising discovery: these roundworms, like most animals, process information using a digital, electric code.

DEET, a chemical in bug sprays, affects the behavior of highly diverse organisms—but how it works remains unclear. New research in C. elegans shows that the compound exploits unique receptors and neurons to interfere with the animals’ response to odors.