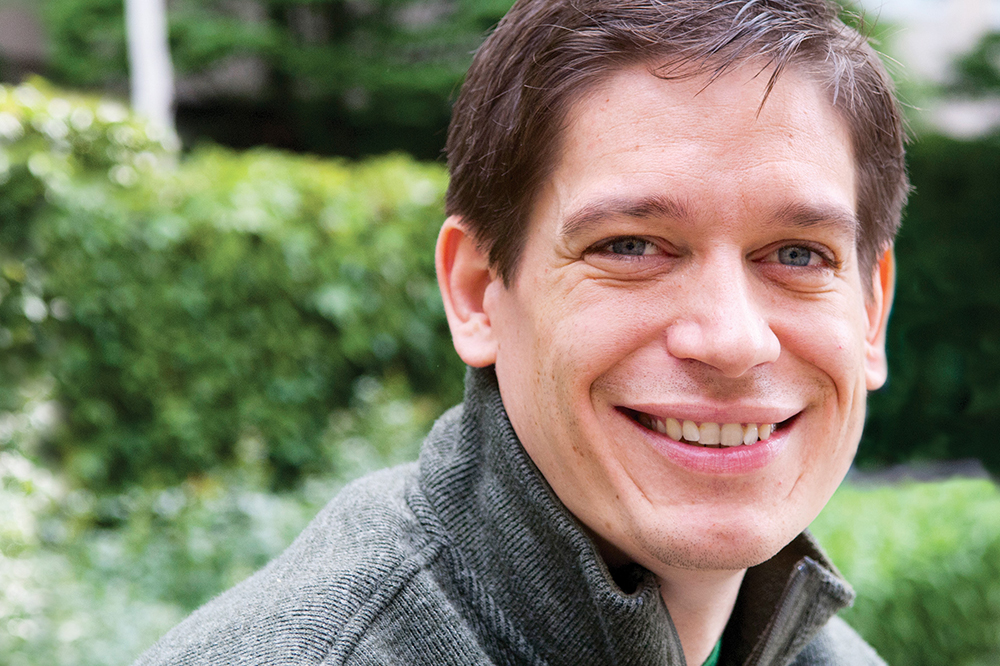 Scientists have long been fascinated by the sophisticated, highly structured societies found within beehives, ant colonies, and the nests of other social insects. But the same complex biology that so interests researchers also makes these bugs difficult experimental subjects.

Daniel Kronauer, who has dedicated his laboratory to investigating the molecular basis underlying complex social behavior among insects, has overcome that problem by identifying a single species, the clonal raider ant, whose unusual traits make it a good fit for challenging experiments. Kronauer’s promotion to associate professor will be effective on January 1.

“To do well-controlled laboratory experiments, you need to be able to precisely manipulate and track members of a colony, something that is rarely achieved with frequently-studied social insects, such as honey bees,” says Kronauer, currently the Stanley S. and Sydney R. Shuman Assistant Professor. “Once we had chosen this species, we went all in and built it up as a model system from scratch.”

Since Kronauer arrived at Rockefeller in 2011, his lab has been developing the new techniques necessary to manipulate the ants’ genes, and technology capable of tracking individual ants as they move about within their colonies. This effort has begun to pay off, yielding new insights on ants’ chemical-based communication and on the molecular controls that govern the division of labor within colonies.

Ants in the lab

As a graduate student, Kronauer studied tropical army ants in the field, but the massive size of the colonies, and the nightly relocation of their nests prevented him from doing the kind of studies he wanted to do. “They are fascinating, but you can’t get an experimental handle on them,” he says.

In four obscure scientific papers, he found descriptions of a more sedentary relative: Ooceraea biroi, now called the clonal raider ant. Unlike many other social insects, the clonal raider ant does not have queens who lay all the eggs. Instead, as their name suggests, they clone themselves, laying unfertilized eggs, then care for the young in a synchronized colony-wide cycle. Kronauer realized this simple reproductive scheme, along with the ants’ other traits, could allow him to control crucial factors, such as the composition and genetics of a colony.

In 2008, he traveled to Japan to collect his first colonies. Since then, he has focused on better understanding their biology and building the scientific resources necessary for experiments, including sequencing their genome and building an automated tracking system that uses cameras to monitor individual members of the group.

For a colony to function, ants must talk to each other. Instead of words and facial expressions, they use chemical signals known as pheromones, which other ants pick up with their antennae. Kronauer’s lab has shed new light on the genetic basis for this communication system, which is also used by many other insects. He created the first targeted genetic mutations in ants, disrupting their ability to perceive pheromones. The affected ants could no longer interact properly with their colony mates, and their brain anatomy was altered—results that are evidence of pheromone perception’s importance in the evolution of these insects and their societies.

Insect societies are also known for the strict division of labor among their members. Studies in the lab with the clonal raider ant have cast doubt on the assumption that one mechanism—a specific chemical modification to DNA in the brain—makes it possible for two identical eggs to produce ants with very different identities. He is also exploring the molecular controls that underlie ants’ jobs within a colony, including the role of neurologically active molecules in determining how readily an ant responds to job-related cues, such as those from needy larvae.

Although ant and human societies are not at all alike, Kronauer’s work on social behavior does offer parallels to our own. “While it’s not a one-to-one translation, you could use ant communication to look at how complex cognitive systems, like those in the human brain, arise over evolutionary time,” Kronauer says. Likewise, some of the molecules involved in setting ants’ response thresholds to social behavioral cues are found throughout much of the animal kingdom, including in humans.

“Through his insight and hard work developing a new model organism, Daniel has laid the groundwork for innovative new inquiries into immensely complex biological systems,” says Richard P. Lifton, the university’s president. “Research within his lab promises not only to deepen our understanding of insects’ fascinating societies, but also offer broader insights on social behavior and evolution.”

Ruta, who explores how brains produce such flexible responses to fixed stimuli, has been promoted to Gabrielle H. Reem and Herbert J. Kayden associate professor.

How the brain recognizes familiar faces

Scientists have located two areas in the brain that help us recognize familiar faces. The discovery will help them delve deeper into the relationship between face recognition, memory, and social knowledge.