The exquisite social hierarchy of insect colonies has long fascinated scientists. Take two eggs—both contain identical genetic material, but while one becomes a sterile worker, the other may develop into a queen that can reproduce. Workers perform brood care and other crucial tasks that keep the colony going, and typically live for a few weeks or months, whereas the egg-laying queens of some species live for years or decades.

What accounts for this dramatic divergence in the two insects’ development? Within the last decade, many scientists have come to believe that DNA methylation—a mode of genetic regulation in which chemical tags turn genes on or off—is involved. 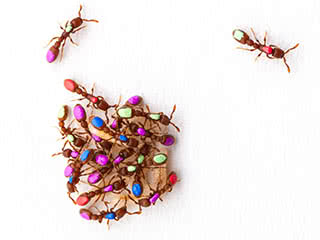 Divison of labor: Above, individual members of a colony of clonal raider ants, Cerapachys biroi, have been tagged for behavioral studies. While some ants form a tight cluster and nurse the ant larvae, others leave the cluster to explore and forage.

However, this explanation doesn’t hold up to scrutiny, according to new findings from Rockefeller University published on January 21 in Current Biology. The researchers studied DNA methylation in clonal raider ants, Cerapachys biroi, which can switch between performing either brood care or egg-laying. When comparing methylation patterns in the brains of workers and queens, they found no overall differences.

“Discovering that there is no evidence to support methylation as a reason why two ants can behave so differently was, on the one hand, a little sobering,” says senior author Daniel Kronauer, assistant professor and head of Rockefeller’s Laboratory of Social Evolution and Behavior. “On the other hand, this finding could be really important for those who want to understand the evolution of social behavior and the function of DNA methylation in insects.”

The case for methylation

Previous research had found methylation differences in the brains of insect queens and workers—making many scientists believe these differences cause the animals to take on different social roles. “It was a great story, and everyone ran with it,” says Peter Oxley, a co-first author and postdoc in the lab.

But these previous studies looked at average levels of methylation within a sample of each insect type—taking, for instance, a group of worker ants, mixing their DNA together, and measuring the average amount of methylation among all their brains.

A lack of evidence

To take that extra step, members of Kronauer’s team—including co-first author Romain Libbrecht, who at the time was a postdoc in Kronauer’s lab and presently works at the University of Lausanne, in Switzerland—measured methylation levels from multiple samples of ants performing brood care or laying eggs. In these experiments, the distinctions found in previous research didn’t hold up. The team did see differences in methylation between samples; however, these differences were equivalent between samples of workers, as well as between samples of queens. “It dawned on us that there was really nothing there,” Kronauer says.

It’s not that methylation doesn’t do anything at all—in fact, the researchers found that it is primarily associated with genes that serve crucial functions for workers and queens alike, suggesting that DNA methylation might contribute to the stable expression of so-called household genes.

And, Kronauer notes, “we can’t say for sure there is no difference in methylation between queens and workers. What our study does show is the current evidence is inconclusive. That does not rule out the possibility that future studies with even higher resolution and more statistical power could find such differences.”