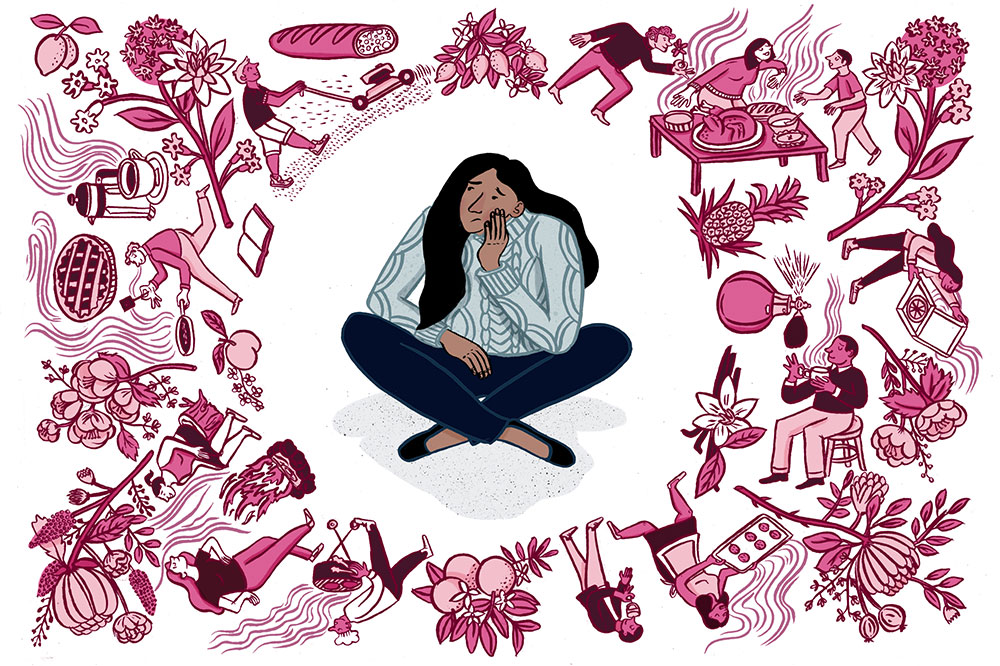 Smell problems can increase people’s risk for health problems like depression, or even be a sign of neurodegenerative disease. (Illustration by Vidhya Nagarajan)

Nisha Pradhan was seven when she began to suspect she was missing out on something. Her sister seemed to have an uncanny knack for predicting what their mother was making for dinner. Pradhan, meanwhile, never had a clue.

“I would just stare at her,” Pradhan says. “She’s younger than me—how does she know more than I do?”

Now 21, Pradhan knows she has a limited ability to detect odor—including the smell of dinner cooking. Her situation is not unique: The sense of smell is often taken for granted, until it malfunctions.

As a patient in a clinical trial being conducted at Rockefeller University, Pradhan is helping scientists develop new smell tests, which promise to help improve diagnosis because they can be used reliably for anyone, anywhere. Because smell disorders can be linked to a variety of health conditions-interfering with appetite, as well as social interaction and sometimes leading to isolation, anxiety, and depression.

“People have their vision and hearing tested throughout their lives, but smell testing is exceedingly rare,” says neuroscientist Leslie Vosshall.

The new tests, developed by Vosshall along with Julien Hsieh, a Rockefeller clinical scholar, and their colleagues could even aid the early detection of neurological disorders that have been linked to problems with olfaction.

People suffer from smell loss for various reasons—a head trauma or sinus infection, for example, or even a common cold—and the cause can be as hard to pinpoint as the condition itself. In Pradhan’s case, she believes she lost much of her sense of smell as a young child, although she’s not sure how. She brought the issue up with her pediatrician, but never received any testing or guidance.

Both the medical community and the people affected by smell loss can be prone to overlook it. “Olfies,” says Pradhan, referring to people with a normal sense of smell, “think not having a sense of smell just affects our ability to detect gas leaks, smoke, and bad body odor. But it deprives us of so much more, including emotions and memories that are so intimate and integral to the human experience.”

A handful of tests already exist for diagnosing people like her. One problem with these tests is that they rely on a patient’s ability to detect and identify single types of odor molecules, such as rose-scented phenylethyl alcohol. However, the ability to detect odors and to recognize them can vary greatly between people. So, someone with an otherwise normal sense of smell may not be able to detect the rose molecule. Meanwhile, another person who can smell roses but is from an area where these flowers are scarce may struggle to put a name to the scent. In either case, there is the potential for misdiagnosis, particularly when testing across different populations and countries.

The problem of smell

Hsieh and colleagues set out to eliminate these potential biases with the help of “white smells,” made by mixing many odors together to produce something unfamiliar. Just as a combination of wavelengths of light produces white light, and many frequencies of sound make up white noise, the team generated white smells from assortments of 30 different odor molecules. Their two new tests ask patients to distinguish white smells with overlapping ingredients and to detect white smells at increasingly lower concentrations.

If a person is unable to detect a single component of the test scent, this has little effect on the outcome, and test takers don’t need to identify the odor at all. “We’re really excited about these new tests,” says Vosshall, who is Robin Chemers Neustein Professor and a Howard Hughes Medical Institute investigator. “They focus on the problem of smell itself, because they don’t force people to match smells to words.”

Clinical trials conducted at The Rockefeller University Hospital and Taichung Veterans General Hospital in Taiwan showed that the new tests detected smell loss more reliably than conventional options. The results, published in Proceedings of the National Academy of Sciences, open up the possibility of a new means to detect smell loss worldwide. It could be used for detection of Alzheimer’s and Parkinson’s diseases, says Hsieh, now a resident at the Geneva University Hospitals in Switzerland.

“The goal is to use changes in the sense of smell, along with other biomarkers, to identify underlying causes of these neurological disorders very early, and so potentially improve treatment,” he says.