Simple strategy could lead to a “universal” flu vaccine 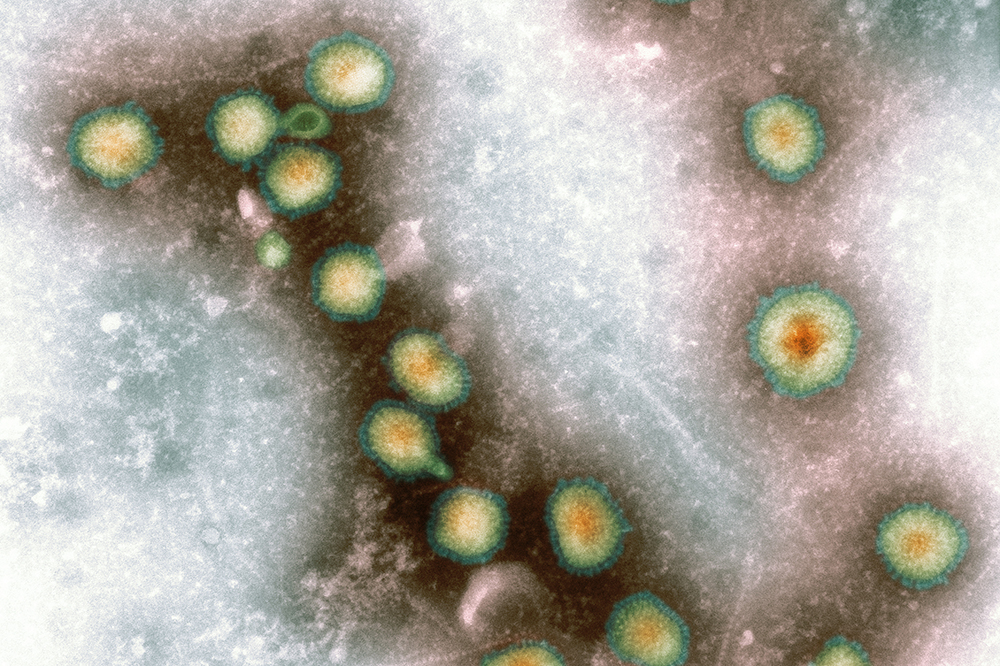 Researchers are working on a vaccine they hope will protect against many flu strains, including pandemic-inducing bird viruses like the one shown above.

It’s that time of year again: Temperatures drop, sleeves go up, and the needles come out. If scientists at The Rockefeller University have their way, however, the annual ritual of the flu shot could become obsolete.

A team based in Jeffrey V. Ravetch’s lab has devised a strategy for improving existing flu vaccines to better protect against these ever-mutating viruses. If successful, their work could translate into fewer flu shots.

“We have a simple, direct strategy for developing a broadly protective influenza vaccine,” says Taia T. Wang, who conducted the research as an instructor in clinical investigation in Ravetch’s lab.

Current vaccines protect against three or four specific strains of flu that experts predict will be in circulation during a particular flu season. However, in new experiments, the researchers found they could alter such a vaccine to defend mice against two additional strains, of which one has the potential to erupt into a global outbreak. The researchers say this is an important step toward a single, “universal” vaccine that protects against all the myriad viruses that cause flu.

Shots in the dark

A serious and sometimes fatal disease, flu typically circulates in fall and winter. While outbreaks may be predictable, the cause of the disease is not. Flu viruses are numerous, diverse, and constantly changing, making them difficult targets for vaccines. That’s because the vaccines contain proteins from specific viral strains, which prime the immune system to respond to the real thing—namely, whole viruses from the very same strains.

What’s more, seasonal vaccines offer little or no protection against a much rarer, more dramatic disease: pandemic flu, which arises when viruses residing in animals, particularly birds, acquire the ability to spread rapidly between people.

The researchers believe it may be possible to provide broad protection against most seasonal strains, and perhaps even pandemic flu, by adding a special ingredient to current vaccines.

In earlier experiments, the researchers found that soon after receiving a flu shot, the people who responded best to the vaccine produced high levels of immune proteins called antibodies with an important change to their structure. Rather than directly fighting the virus, these altered antibodies act as signals, prompting the immune system to produce other antibodies that are especially good at latching onto—and disabling—the pathogen.

Wang and Jad Maamary, a former postdoc in the lab, bolstered a regular flu vaccine with similarly altered antibodies. In recent experiments, they found this new and improved vaccine protected mice against viruses it did not contain, including a strain of the seasonal virus known as H1N1 and a strain of H5N1, a bird virus with the potential to cause pandemic disease.

In hopes of expanding the coverage afforded by their altered vaccines and so making annual shots a thing of the past, the researchers now plan to test their approach against yet more branches of the vast flu family.

“A very reasonable goal might be to provide protection over five to ten flu seasons, with some protection against pandemic strains as well,” says Wang, who is now an assistant professor at Stanford University. “But a true universal influenza vaccine may also be attainable—and that is, of course, our objective.”

The implications of the research, which was described recently in the Proceedings of the National Academy of Science, go beyond flu. “It may be possible to exploit the same signaling pathway to improve other vaccines, including those that prevent some bacterial infections,” says Ravetch, the Theresa and Eugene M. Lang Professor.