A cell’s destiny is set earlier than expected 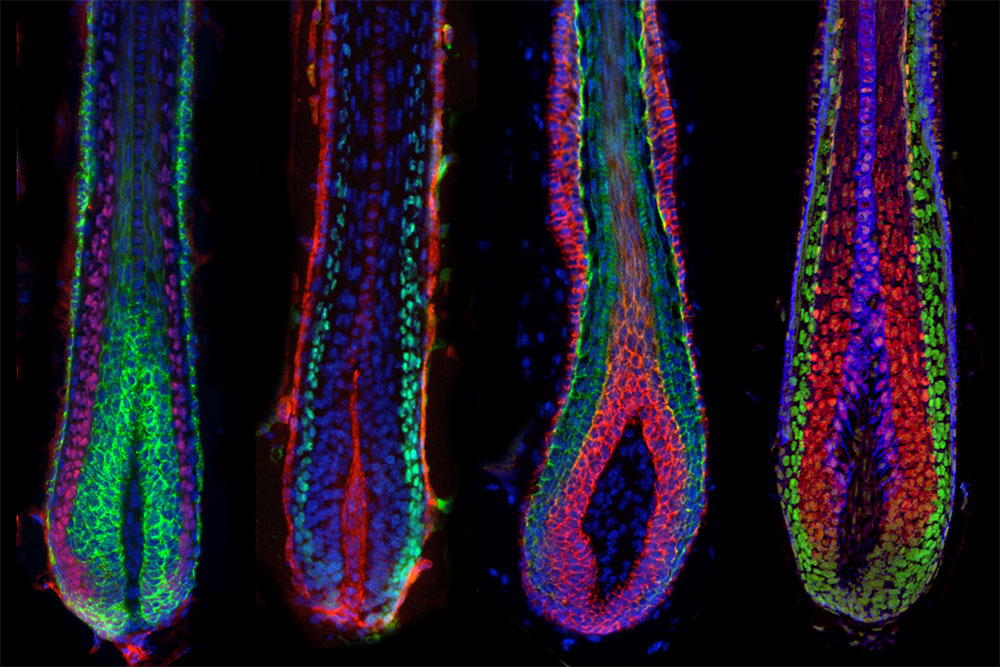 The stem cells that make hair follicles, shown here, are organized into compartments by the cell type they will eventually become long before they differentiate.

Our bodies are made up of cells that look very different from one another, yet they all started out as undifferentiated stem cells. As we develop, these stem cells are set aside into pockets that adult tissues can access when they need to replace old cells or repair wounds. But at a certain point in an adult stem cell’s journey, its fate is sealed, and the type of cell it is destined to become is non-negotiable. Until now, scientists have had little idea when or where that decision happens.

Experiments conducted at The Rockefeller University and reported in Cell shed light on how these choices are made.

In order to make a new hair, the stem cells must also make a channel, or follicle, to guide hair growth. In total, the hair and its follicle is composed of eight different layers of cells. By watching how new hair follicles are regenerated, Elaine Fuchs, who led the research, and her team discovered that each stem cell receives different instructions within the pocket it’s stored in, called the niche, to tell it what to do and when.

The skin is compartmentalized into tiny patches, each of which has an associated stem cell niche, where cells remain in a dormant, quiescent state until they are tapped to regrow a new hair follicle. Once activated, they give rise to what’s known as transit-amplifying cells, a phase considered to be the midway point between a stem cell and a fully differentiated cell, when they can greatly proliferate. The transit-amplifying cells then develop into the various types of cells that fuel tissue growth.

By investigating the gene expression of each individual cell at different stages during the regeneration of a new hair follicle, Fuchs and colleagues learned that stem cells go through a highly choreographed program that progressively restricts the type of cell they can become. This program is influenced by where the cells are located and the exact timing of the follicle’s regeneration.

“To our surprise, we found that choices begin to be made even when stem cells are still in their niche, quiescent and waiting to be activated,” says Hanseul Yang, graduate fellow and first author of the study. “We traced the origin of these differences to interactions between stem cells and a cluster of neighboring cells at the very bottom of the niche, called mesenchymal cells. Each stem cell has a slightly different distance from this mesenchymal cluster, resulting in a dividing of the niche into different sections called micro-niches. Stem cells within each micro-niche are blueprinted with instructions for what to do.”

“By giving the stem cells different instructions before they begin, they can better coordinate their tasks in regenerating tissues,” says Fuchs, who is Rebecca C. Lancefield Professor at Rockefeller and a Howard Hughes Medical Institute investigator.

As these multipotent progenitors expand, they envelope the mesenchymal cluster, and the micro-niches diversify. By the time the hair follicle is fully developed and the new hair grows, the transit-amplifying cells within these micro-niches are unique, and are only able to produce one of the types of cells that make up the hair follicle.

“By organizing stem cells and their progeny into micro-niches, tissue regeneration can choreographed in both time and space so that a complex structure like the hair follicle, which is composed of many different cell types, can form without mistakes,” says Fuchs.

The researchers anticipate that these findings will have broad implications for many organs and tissues, as well as in wound repair.

Fuchs investigates molecular mechanisms of skin stem cells, how they make and repair tissues, and how cancers develop.