A mechanism shared by healing wounds and growing tumors 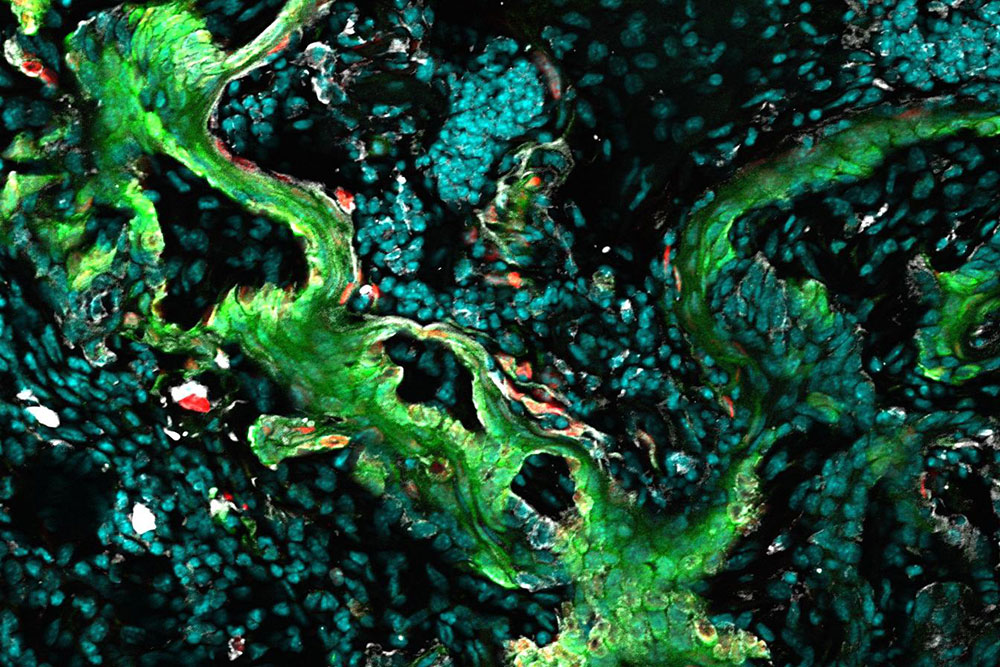 Cancerous cells in a skin tumor become locked in an abnormal state as a result of the activation of a gene-regulating element (green).

Like an image in a broken mirror, a tumor is a distorted likeness of a wound. Scientists have long seen parallels between the two, such as the formation of new blood vessels, which occurs as part of both wound healing and malignancy.

Research at The Rockefeller University offers new insights about what the two processes have in common—and how they differ—at the molecular level. The findings, described April 20 in Cell, may aid in the development of new therapies for cancer.

At the core of both malignancy and tissue mending are stem cells, which multiply to produce new tissue to fill the breach or enlarge the tumor. To see how stem cells behave in these scenarios, a team led by scientists in Elaine Fuchs’s lab compared two distinct types found within mouse skin.

One set of stem cells, at the base of the follicle, differentiates to form the hair shaft; while another set produces new skin cells. Under normal conditions, these two cell populations are physically distinct, producing only their respective tissue, nothing else.

But when Yejing Ge, a postdoc in the Fuchs lab, looked closely at gene activity in skin tumors, she found a remarkable convergence: The follicle stem cells expressed genes normally reserved for skin stem cells, and vice versa. Around wounds, the researchers documented the same blurring between the sets of stem cells.

Two of the identity-related genes stood out. They code for so-called “master regulators,” molecules that play a dominant role in determining what type of tissue a stem cell will ultimately produce—in this case, hair follicle or skin. The researchers suspect that stress signals from the tissue surrounding the damage or malignancy kick off a cycle that feeds off itself by enabling the master regulators to make more of themselves.

While wounds heal, cancer can grow indefinitely. The researchers discovered that while stress signals eventually wane in healing wounds, they can persist in cancer—and with prolonged stress signaling, another region of DNA opens up to kick off a separate round of cancer-specific changes.

“Tumors have been described as wounds that never heal, and now we have identified specific regulatory elements that, when activated, keep tumor cells locked into a blurred identity,” Ge says.

The scientists hope this discovery could lead to precise treatments for cancer that cause less collateral damage than conventional chemotherapy. “We are currently testing the specificity of these cancer regulatory elements in human cells for their possible use in therapies aimed at killing the tumor cells and leaving the healthy tissue cells unharmed,” Fuchs says.

A new study uncovers a near-universal mechanism behind this phenomenon, known as inflammatory memory.

Researchers studying two forms of skin cancer identified a long-overlooked factor determining why some tumors are more likely to metastasize than others: the physical properties of the tissue in which the cancer originates. The findings might set the stage for new ways to monitor and treat the diseases in the future.

Fuchs investigates molecular mechanisms of skin stem cells, how they make and repair tissues, and how cancers develop.