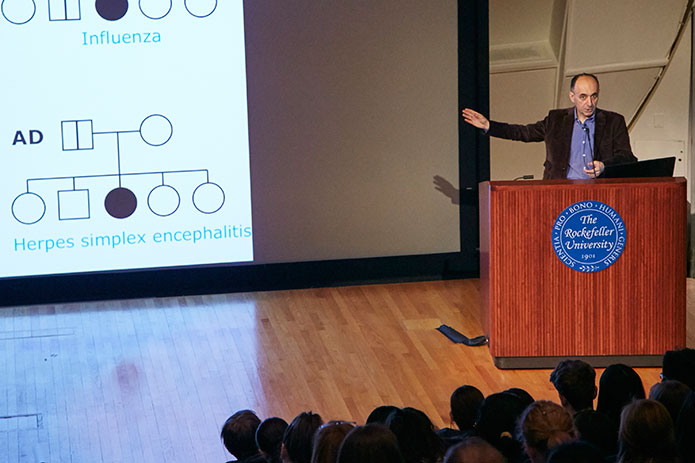 Jean-Laurent Casanova discussed his own research and the history behind it with high school students during the annual Talking Science lecture.

As he opened this year’s Talking Science lecture, geneticist Jean-Laurent Casanova made a stark observation to his teenage audience: “If we had been here 150 years ago, about half of you would already have died.” The primary reason, he told the 350 high school students and 60 teachers present, would have been fever-causing infections, which have decimated generations of children for much of human history.

During his presentation, Dr. Casanova, head of the St. Giles Laboratory of Human Genetics of Infectious Diseases, traced centuries of inquiry into the causes of these illnesses, leading up to current research, including his own work.

In the 19th century, scientists established that many fatal childhood diseases are caused by infection with bacteria and other pathogens. This discovery became central to the modern understanding of these diseases, but it does not fully explain one important question: Why do many pathogens, such as the flu virus, cause fatal illnesses in some people, but bring only minor discomfort to others?

“What we are going to discuss today is that these infectious diseases, at least in some children and adults, are not only infectious disorders but that they are also genetic disorders,” Dr. Casanova said.

Students and teachers from 52 schools in and around New York City attended this year’s lecture, which took place in January in Caspary Auditorium. A popular Rockefeller event, Talking Science began in 1959 and was formerly known as the Holiday Lecture. Established by Alfred E. Mirsky, a biochemist and Rockefeller University librarian, it aims to engage high school students, following in the footsteps of chemist Michael Faraday’s holiday lectures to young audiences in London, in the early 1800s. During a break in the lecture, Science Outreach Program staff and volunteers offered students hands-on activities, such as viewing inactivated pathogens under a microscope and ranking the level of threat posed by viruses, including Ebola, rabies, and Zika, if they were released in a crowd.

In the latter half of the 19th century, the microbiologist Louis Pasteur proposed the so-called germ theory, which posits that microbes cause infectious diseases. Shortly afterward, Robert Koch, a physician in Germany, established rules for determining that a specific microbe is responsible for a disease and identified the bacterium that causes the deadly lung infection tuberculosis. These discoveries helped drive improvements in sanitation and opened the door for the development of antibiotics, and other treatment and prevention measures.

Over time, however, scientists discovered that an infection does not necessarily lead to severe illness. “The bulk of infectious agents actually kill or can kill 1 percent, or 1 in 1,000, or 1 in 10,000 infected individuals,” said Dr. Casanova, who is a senior attending physician at The Rockefeller Hospital and a Howard Hughes Medical Investigator.

By the early 20th century, a number of theories attempted to explain why infections are more dangerous in some people than others. One of these—the idea that drives Dr. Casanova’s work—implicates variations in a person’s genome.

A few decades later, it became possible to determine the genes and cells responsible for differences in individual susceptibility. Scientists began identifying disorders in which errors in a single gene make a person unable to produce a particular component of the immune system, such as a specific type of white blood cell. These conditions can lead to increased vulnerability to multiple infectious diseases, as well as other problems.

Work in Dr. Casanova’s lab tackles more cryptic cases: Specific infectious diseases that, in some families, occur sporadically in children who have no obvious deficits in their immune systems or blood.

He and his colleagues have so far identified genetic errors linked to a number of severe infections, including those caused by a relative of the bacterium responsible for tuberculosis, life-threatening flu, and brain inflammation induced by the herpes simplex virus. The people who carry these mutations do not always get sick, making the genetic link harder to detect.

These discoveries can help doctors better diagnose infectious diseases, as well as offer genetic counseling to those at risk. “We can also prevent or treat infections with a molecule that is missing,” Dr. Casanova said. For example, after finding that two Kuwaiti cousins’ illnesses sprang from a mutation that interfered with an immune signaling protein, it became possible to treat them with the missing protein.