When most cells divide, they simply make more of themselves. But stem cells, which are responsible for repairing or making new tissue, have a choice: They can generate more stem cells or differentiate into skin cells, liver cells, or virtually any of the body’s specialized cell types. 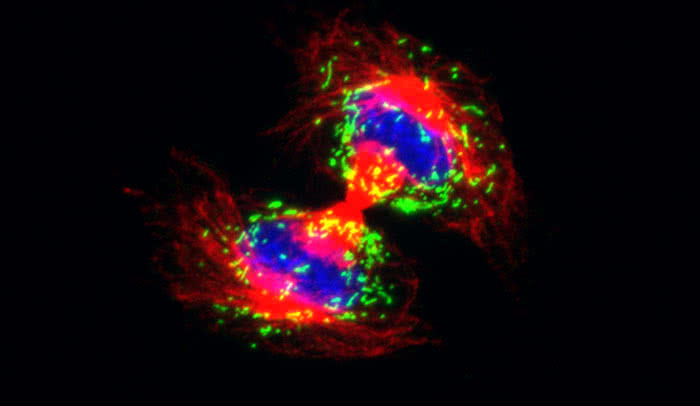 Disrupted division: In a dividing cell (above), tiny organs called peroxisomes (green) are evenly distributed in distinctive arcs. In cells lacking the protein Pex11b, peroxisomes are no longer allotted equally.

As reported February 3 in Science, scientists at The Rockefeller University have discovered that this pivotal decision can hinge on whether or not tiny organ-like structures, organelles, are divvied up properly within the dividing stem cell.

“In order for the body’s tissues to develop properly and maintain themselves, renewal and differentiation must be carefully balanced,” says senior author Elaine Fuchs, the Rebecca C. Lancefield Professor and head of the Robin Chemers Neustein Laboratory of Mammalian Cell Biology and Development. “Our experiments suggest an unexpected role for the positioning and inheritance of cellular organelles, in this case enzyme-filled peroxisomes, in controlling this intricate balance.”

The outer section of the skin, the epidermis, provides a protective barrier for the body, and stem cells reside deep within it. During development, these cells divide so that one renewing stem cell daughter remains inward while the other daughter differentiates and moves outward to become part of the epidermis’ outer layers. First author Amma Asare, a graduate student in the lab, wanted to know how skin cells first emerge and begin this transition.

Looking in developing mouse skin, Asare devised an approach to identify genes that help guide the balance between new cells that either stay stem-like or differentiate. One particular protein, Pex11b, caught her attention. It is associated with the membrane that surrounds the peroxisome, an organelle that helps to free energy from food.

Asare showed that the protein seems to work by making sure the organelles are in the right locations so they can be divided between the daughter cells. In cells that lacked Pex11b, peroxisomes weren’t divvied up evenly—in some cases, one daughter cell ended up with all of the peroxisomes and the other didn’t get any at all. And for those cells whose peroxisome distribution was disrupted, cell division took longer, and the mitotic spindle, the structure that separates the daughters’ genetic material, didn’t align correctly.

The net result of depleting skin stem cells of Pex11b, Asare found, was that fewer daughter cells were able to differentiate into mature skin cells.

The researchers next moved peroxisomes around in the cell using a sophisticated laboratory technique, and the effect was the same. “If the peroxisomes are in the wrong positions during cell division, no matter how they get there, that slows down the process,” Asare says.

The effect for the whole organism was dramatic: If peroxisome positioning was disrupted in the stem cells, the mice embryos could no longer form normal skin.

“While some evidence already suggested the distribution of organelles, including energy-producing mitochondria, can influence the outcome of cell division, we have shown for the first time that this phenomenon is essential to the proper behavior of stem cells and formation of the tissue,” says Fuchs, who is also a Howard Hughes Medical Institute Investigator.

Dr. Elaine Fuchs studies where stem cells come from and how they make and repair tissue throughout life. She explores how stem cells communicate with immune, dermal, and other cells in their environment and how this communication malfunctions in aging and cancers. Dr. Fuchs is a Howard Hughes Medical Institute Investigator, Rebecca C. Lancefield Professor, and head of the Robin Chemers Neustein Laboratory of Mammalian Cell Biology and Development

Funding for this Study

This research was supported by the National Institutes of Health (grant no. R37-AR27883).