Howard C. Hang, Richard E. Salomon Family Associate Professor and head of the Laboratory of Chemical Biology and Microbial Pathogenesis, has won the 2017 Eli Lilly Award in Biological Chemistry. The prize, given by the American Chemical Society, recognizes outstanding research in biological chemistry of unusual merit and originality. Hang will receive a bronze medal and an honorarium. 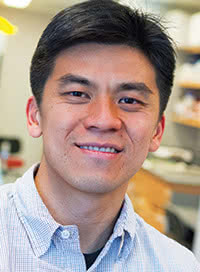 Hang, who joined Rockefeller in 2007, studies how immune cells deal with invading microbes and how successful pathogens subvert these host defense mechanisms. By developing innovative chemical approaches, his lab has discovered that many proteins involved in host immunity to viruses and bacteria are regulated by fatty acid modifications. Much of his work is focused on understanding how the attachment of fatty acids to proteins is regulated in immune cells, and determining whether microbial pathogens interfere with this lipid modification during infection to cause disease.

Hang received his undergraduate degree from the University of California, Santa Cruz, and his Ph.D. from the University of California, Berkeley. Before joining Rockefeller, he studied innate and adaptive immunity as a Damon Runyon Cancer Research Foundation Fellow at Harvard Medical School and at the Whitehead Institute for Biomedical Research. Hang is the recipient of the Irma T. Hirschl/Monique Weill-Caulier Trust Research Award and the Ellison Medical Foundation New Scholar Award.

Established in 1876, the American Chemical Society works to advance the field of chemistry and support innovation, science education, and environmentally and socially responsible public policy. The Eli Lilly Award, which is administered by the society’s division of biological chemistry, aims to stimulate fundamental research in biological chemistry by scientists under the age of 38. Rockefeller scientist Robert G. Roeder won the award in 1977.