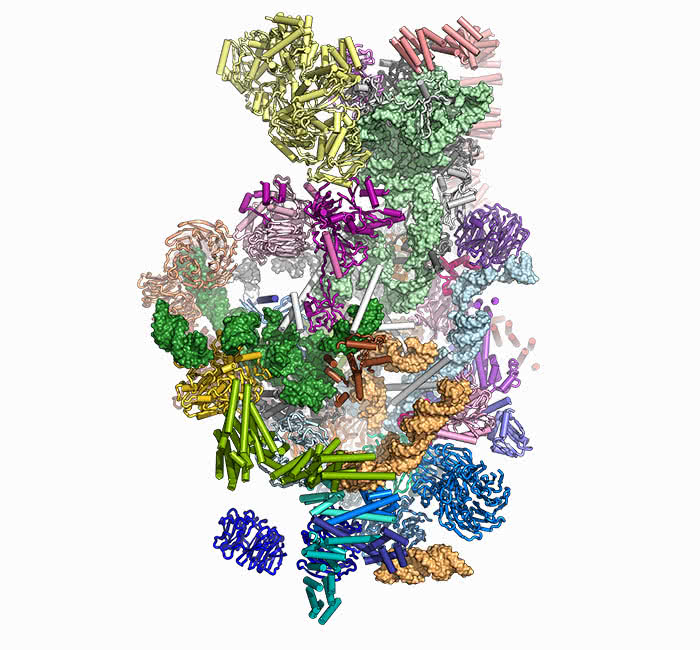 Scientists at The Rockefeller University have created the most detailed three-dimensional images to date of an important step in the process by which cells make the nano-machines responsible for producing all-important protein. The results, described December 15 in Science, are prompting the researchers to re-evaluate how they envision this early phase in the construction of ribosomes.

The structure they determined, shown above, belongs to a particle formally called the “small subunit processome.” Before this particle can fulfill its destiny to become the smaller half of a complete ribosome, the RNA within it needs to be folded, tweaked, and cut.

“Initially, we thought of the small subunit processome as a product on an assembly line, with molecular workers arriving from outside, much like the robots that would put together a car. But that analogy no longer appears apt,” says senior author Sebastian Klinge, head of the Laboratory of Protein and Nucleic Acid Chemistry.

“Instead, we see integral components of the particle—protein complexes and RNA—constructing and organizing from within, before the outer layer peels away. In that sense, the processome is more like an egg about to hatch,” he adds.

Like most studies of ribosomes, this one used yeast, whose protein-making machines look nearly the same as those of other complex cells, including our own.

To produce the highest resolution images of this particle yet available, Klinge; first author Malik Chaker-Margot, a graduate student in the lab; and the other team members used an approach known as cryo-electron microscopy. The small subunit processome structure is one of a number of recent breakthroughs, including the first complete map of the cystic fibrosis protein, made with new equipment installed at the university’s Evelyn Gruss Lipper Cryo-Electron Microscopy Resource Center.

Study reveals how ribosomes are assembled in human cells

Three-dimensional images of human small ribosomal subunits offer the most detailed explanation for how the cell's protein-making machines are assembled.

Building the machinery that makes proteins

Scientists have used cryo-electron microscopy to capture the very first snapshots of the large ribosomal subunit—part of the ribosome responsible for forging bonds between amino acids, the building blocks of proteins—coming together.