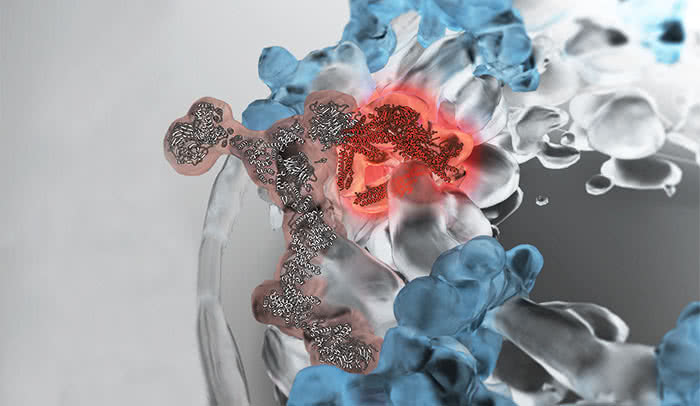 Cells secure DNA within their nuclei like a secret code stashed in a vault. However, the tightly controlled borders of the nucleus create a challenge: In order for the cell to produce essential proteins, messages derived from DNA must somehow escape the nucleus in the form of RNA molecules.

New work by a team of researchers based at The Rockefeller University has determined the structure of one important component of the restrictive gate through which cargo, including genetic information in the form of RNA transcribed from DNA, must pass. The results were published November 10 in Cell.

After cells make an RNA version of DNA, they must package it, and ship it through a portal known as the nuclear pore. Once on the other side, some of that packaging has to come off. “We already understood bits and pieces of this aspect of flux into and out of the nucleus, but not the complete picture,” says co-corresponding author Brian T. Chait’s Laboratory of Mass Spectrometry and Gaseous Ion Chemistry.

“To better understand the end of RNA’s journey through the pore, we examined the protein complex responsible for receiving RNA and helping to unwrap it,” says co-corresponding author Michael P. Rout, head of the Laboratory of Cellular and Structural Biology. “Next, we determined how this structure attached to the rest of the nuclear pore.”

Scientists typically crystallize proteins in order to determine their structure. But that approach didn’t work well for this component because it is relatively large and has flexible parts. So, in close collaboration with Andrej Sali’s lab at the University of California, San Francisco, the researchers pieced a variety of data together as if assembling a jigsaw puzzle. They found that the core of the complex takes a triangular shape, shown in solid red in the image above. This triangle sits atop a Y-shaped piece, shown in lighter red, creating an arm that extends, cranelike, over the pore.

This configuration came as a surprise; previously these proteins were thought to stick out further from the pore, like antennae.

Although the team performed their research on yeast, their work likely has relevance for humans, who possess a similar protein complex. In humans, mutations that affect the complex, as well as other parts of the RNA-catching arm, have been linked to cancer and other diseases. This new blueprint may help to explain why these mutations are harmful, the researchers say.

Scientists map the portal to the cell’s nucleus

The gateway to cellular headquarters has 552 components. A new map that shows how all these pieces fit together could help scientists study numerous diseases.