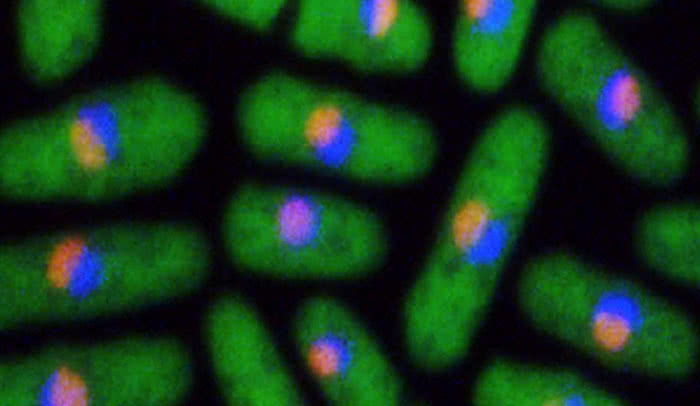 The path to protein: Ribosomal assembly begins within a cell’s nucleus, in a dense compartment called the nucleolus (the orange dot within the yeast cells above). The process then moves into the nucleoplasm (blue), also in the nucleus, before finishing in the cytoplasm of the cell (green).

Tiny, abundant biological factories, known as ribosomes, produce the cell’s most fundamental building material: protein. If ribosomes don’t work, cells can’t divide—and this can be an advantage for scientists seeking to develop drugs that target invading organisms, such as pathogenic fungi.

New research based at The Rockefeller University in yeast has identified a compound that interferes with the process by which ribosomes themselves are assembled. The results, described September 22 in Cell, open the door to the development of new medicines.

“Not only does this compound efficiently inhibit the growth of yeast cells, it does so through a unique mechanism. No drug currently on the market interferes with ribosomal assembly,” says senior author Tarun Kapoor, Pels Family Professor and head of the Selma and Lawrence Ruben Laboratory of Chemistry and Cell Biology.

“We believe this compound may be a catalyst for the development of new fungi-fighting medications. This is an exciting prospect: No antifungals with new mechanisms of action have been approved for the past several years,” he added.

Every minute, a growing cell can generate about 2,000 nano-scale factories whose job is to translate genetic sequence into protein. Made of protein as well as RNA, the ribosome is put together by more than 200 worker proteins. Scientists still don’t fully understand how this carefully orchestrated construction takes place.

The new compound, Rbin-1, emerged from a project undertaken by co-first author Shigehiro A. Kawashima, then a postdoc in the lab and now a researcher at The University of Tokyo. Using a sophisticated chemical and genetic screening process that tested more than 10,000 compounds, Kawashima found one, Rbin-1, that appeared to selectively target an enzyme known to be involved in ribosome assembly.

To figure out how Rbin-1 achieved its effect in yeast, Zhen Chen, the other co-first author and a graduate student in the lab, purified the enzyme, called Mdn1. It was a challenging endeavor partly because of the sheer size of the enzyme, which is one of the largest proteins yeast make.

Rbin-1 is not the first compound discovered that can be used to thwart ribosomal assembly, but it’s the first molecule of its kind that might provide a starting point to develop a drug. Unlike other ribosome assembly inhibitors, it is potent, affects only a particular target, and has drug-like chemical properties. Rbin-1 will also be a valuable tool to decipher the fundamental cellular process by which ribosomes are assembled, the researchers say.