John Maciejowski, a postdoctoral fellow in Titia de Lange’s Laboratory of Cell Biology and Genetics, has received the 2016 Regeneron Prize for Creative Innovation. The award, given by Regeneron Pharmaceuticals, Inc., recognizes innovative young scientists based on proposals they submit that have the potential to drive biomedical research forward. 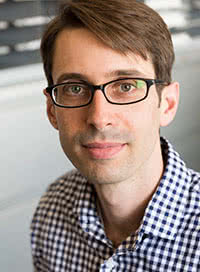 Now in its fourth year, the national award is given to one postdoc and one graduate student annually, who each receive a $50,000 prize and a $5,000 donation to support seminars at their home institutions. Applicants, nominated by the deans of their institutions, submit a proposal of a “dream” biomedical research project they would pursue if they had access to any resource or technology.

Maciejowski, who received his Ph.D. in cancer biology from Memorial Sloan Kettering Cancer Center, recently published research in Cell showing a novel mechanism of malignant cellular transformation. He found that dicentric chromosomes—abnormal chromosomes with two centromeres—formed during mitosis create chromatin bridges between daughter cells that cause nuclear envelope rupture, DNA degradation, and hypermutation. His winning proposal focused on how these events may contribute to cancer-related mutations.

Regeneron is a biopharmaceutical firm based in Tarrytown, New York, that aims to develop medicines for diseases of high unmet medical need, including eye diseases, colorectal cancer, and a rare inflammatory condition. The award is designed to recognize excellence in biomedical science and to foster talented early-career scientists. Each institution may nominate two graduate students and two postdoctoral fellows. Ten finalists, selected by Regeneron scientists, are invited to tour the company’s facilities and meet with its staff.

This is the third consecutive year that a Rockefeller postdoc has won the Regeneron Prize. In 2014, Daniel Schramek received the prize, and Shruti Naik won it last year. Both were awarded the prize while in Elaine Fuchs’s Robin Chemers Neustein Laboratory of Mammalian Cell Biology and Development.