Loud noise, trauma, infections, plain old aging—many things can destroy hair cells, the delicate sensors of balance and sound within the inner ear. And once these sensors are gone, that’s it; the delicate hair cells don’t grow back in humans, leading to hearing loss and problems with balance.

But scientists hope to find a way to regenerate these cells by examining how they develop in the first place. New research at Rockefeller University, in A. James Hudspeth’s Laboratory of Sensory Neuroscience, has identified two genes pivotal to the production of hair cells in young mice, who, just like human babies, lose the ability to generate these sensors shortly after birth. The study was published the week of October 26 in the Proceedings of the National Academy of Sciences.

First author, Ksenia Gnedeva, a postdoc in the lab, began by examining changes in gene expression in the utricle, a hair cell-lined organ within the inner ear that detects motion. She saw that the activity of two genes dropped dramatically shortly after the mice were born and hair cells ceased to develop in their utricles. These genes code for the proteins Sox4 and Sox11, which play a role in shaping the identity cells assume by regulating the expression of other genes. 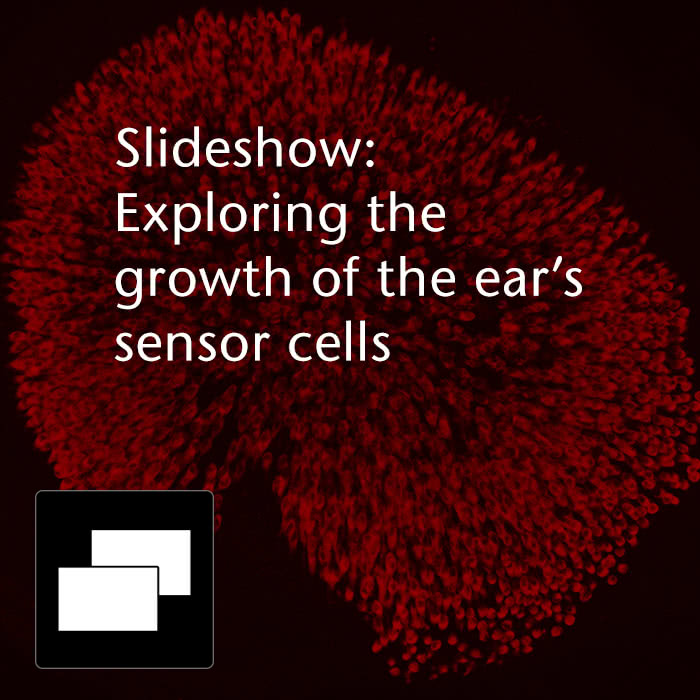 Slideshow: Exploring the growth of the ear’s sensor cells 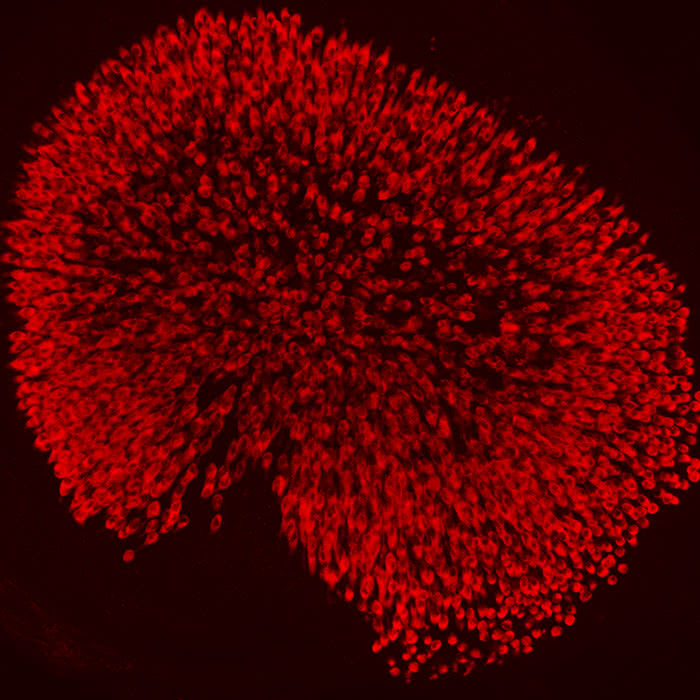 A kidney-shaped organ: Ksenia Gnedeva, a postdoc in A. James Hudspeth’s lab, began by examining changes in gene expression within the lining of the utricle, an organ within the inner ear responsible for detecting linear acceleration by the body. Utricle hair cells develop in the same way as those responsible for hearing. Above, utricle hair cells (red) of a mouse at the time of birth. 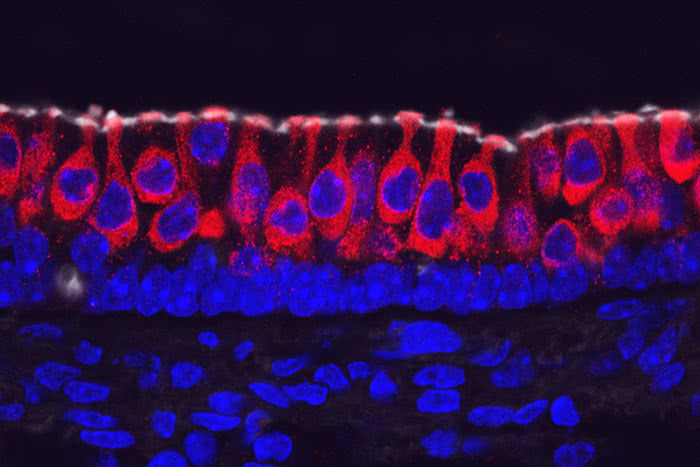 Hair cells arising: This cross section of the lining of the utricle shows hair cells (red with blue nuclei) that can arise from the dense layer of supporting cells directly below (blue only), when these proliferate. 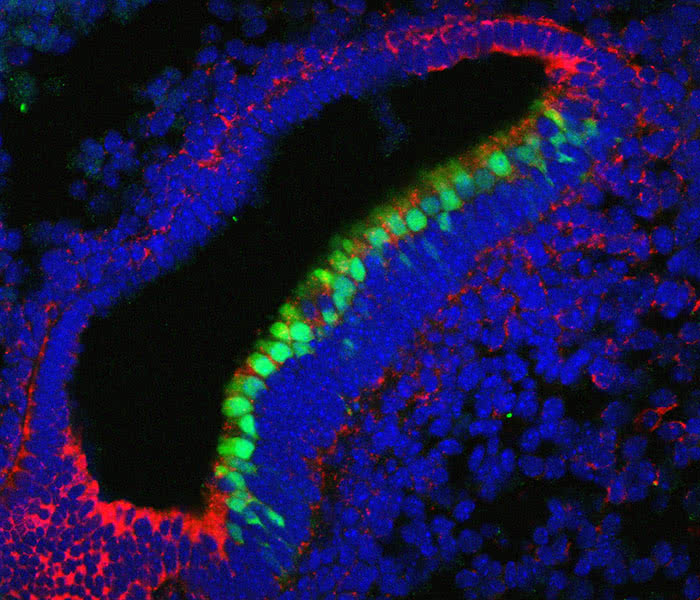 Growing outward: This perpendicular cross section of a mouse utricle in its early stages of development shows the expression of Sox11 (red), one of the proteins identified in the study, at the organ’s periphery, just outside the region containing hair cells (green). 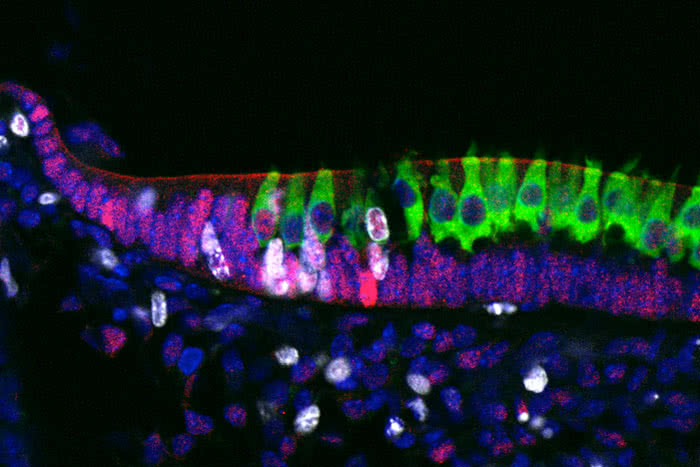 A closer look: The second protein, Sox4 (magenta), appears at the outer edge of the developing utricle, and occasionally within the nuclei of new hair cells (green). Proliferating support cells, which in some cases become hair cells, appear in white. 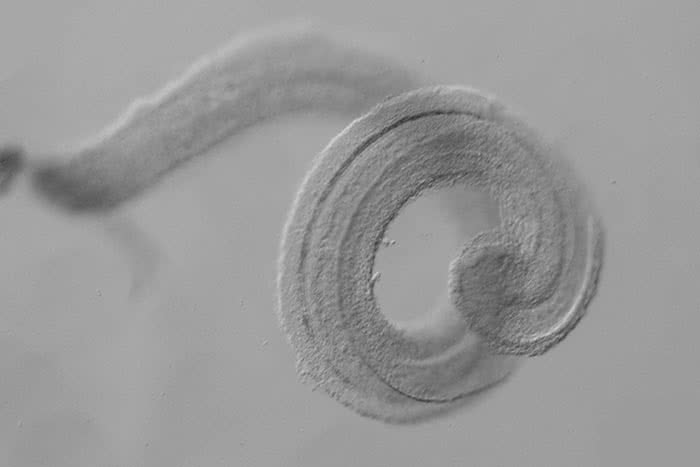 Cochlear spiral: Hair cells within the organ of Corti, which is located within the cochlea (above) of a mouse’s inner ear, respond to sound waves by producing an electrical signal that travels to the brain. These hair cells are developmentally identical to those responsible for the sense of balance. 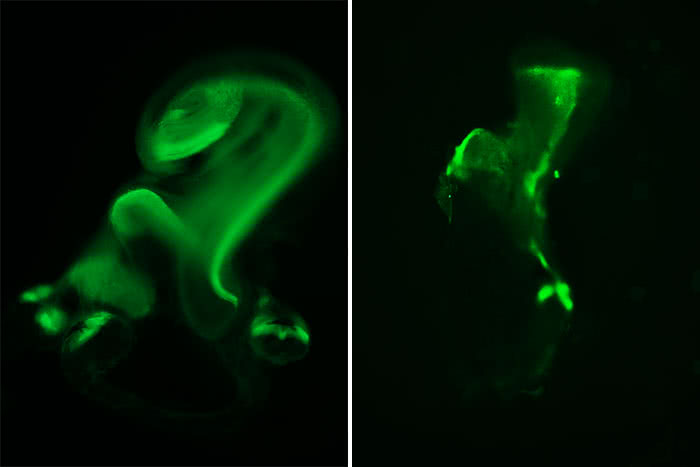 Defects throughout: Mice that did not produce Sox11 and Sox4 had malformed inner ear structures, as shown by the lining, or sensory epithelium (green), that contains hair cells. For example, in normal development (left), the cochlea (circular structure on top) and utricle (circular structure immediately below) are severely malformed in the absence of the proteins (right). 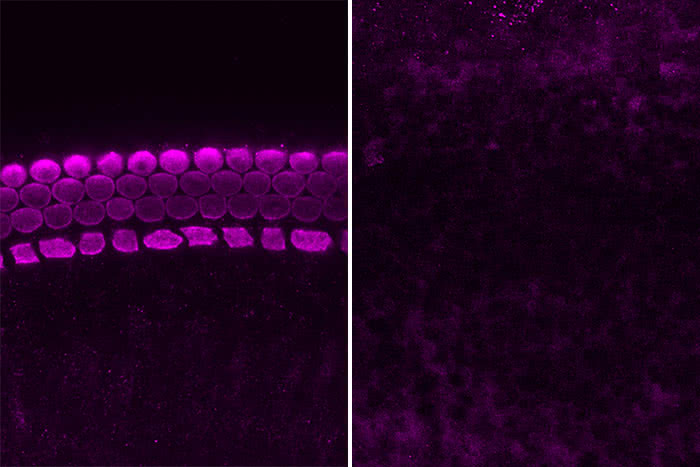 Loss of hair cells: In normal development (left), the hair cells (purple) that respond to sound form four neat rows in the organ of Corti, which is located within the cochlea, a spiral canal. Without Sox11 and Sox4 (right), these hair cells fail to form. 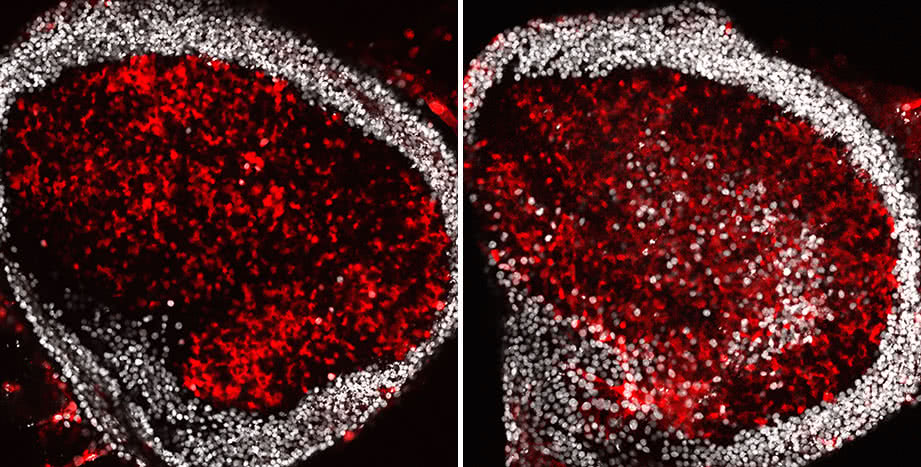 Artificial induction: To test if Sox11 and Sox4 could, on their own, induce the formation of hair cells, Gnedeva infected fully developed utricles with a virus carrying these genes. In the control (left), when the virus infected the utricle (red) without introducing Sox11 and Sox4, proliferating cells (white) appear only outside organ. When the virus introduced Sox11 and Sox4 (right), support cells within the utricle proliferated, some of which went on to form hair cells.

Gnedeva tested these proteins’ involvement in hair cell formation by altering their expression. When both genes were shut down, she found that the entire inner ear, not just the utricle, developed abnormally. In other experiments, she turned on the genes in older mice whose hair cells were fully matured, and discovered that this gene activation could induce the production of new hair cells within a fully developed utricle.

She is now exploring the series of molecular interactions that normally lead to the activation of these proteins and the steps that follow. “Our ultimate goal is to find a target that would allow us to restore hair cells later on in life. It appears possible that these proteins, or perhaps other steps in the same pathway, might be potential targets,” she says.

Hudspeth, the study’s senior author, is the F.M. Kirby Professor at Rockefeller and an investigator with the Howard Hughes Medical Institute.

How do primitive cells “know” where to go during development? Scientists studying the fish equivalent of inner-ear hair cells have shown that biochemical and mechanical cues work together to orchestrate a highly complex arrangement.

Our ability to hear relies on tiny bundles of hair-like sensors inside the inner ear. Scientists have identified a key component of the machinery that makes these bundles grow in an orderly fashion.