This message was sent to the Rockefeller community from the Office of the President on January 29, 2021 at 1:35 p.m.
Subject: Update from the President

Last night I shared one of the most unexpectedly inspiring and moving communal events of recent memory. I stood in a long, slow-moving line with people from many walks of life that included Rockefeller security guards, power plant staff, administrative assistants, senior administrative staff, research scientists and faculty—all of whom met New York State guidelines for vaccination eligibility. The collective mood was excited anticipation tinged with a bit of anxiety. We were attended by Weill-Cornell and New York Presbyterian Hospital staff who were efficient, reassuring and caring. After filling out paperwork, going through registration, reviewing ID’s confirming eligibility, and getting instructions, we each eventually sat down and received a precious dose of a SARS-CoV-2 vaccine. We then waited for 15 minutes to ensure no one had an adverse reaction (no one did), during which time we all exchanged notes on the experience and caught up with colleagues we had not seen in person in months. The experience was cathartic, a glimmer of hope and optimism for the future, and a promise that we have it within our power to bring this pandemic to an end. I suspect more than one of us from Rockefeller shared with pride the recognition that there has rarely been a more crystalline example of Scientia pro bono humani generis – “Science for the benefit of humanity.”

This pride stems from the fact that while the vaccine we each received used technology that is deceptively simple—a single type of RNA molecule in a lipid envelope—the knowledge required to know which viral protein to target and how to deliver the RNA so that it would not be chopped to pieces before getting into cells, would not trigger a massive immune response upon injection, but would induce the synthesis of large quantities of the viral spike protein in a form that would trigger immunity to the virus was a non-trivial task that drew upon decades of fundamental basic science to enable the progress from recognition of a new pandemic virus to delivery of a safe and effective vaccine in one year. The two approved RNA vaccines have each shown 95% protection from symptomatic infection, and nearly 100% protection from severe disease, with few side effects, limited primarily to minor arm pain after the first dose, and symptoms that may include fever, aches and fatigue for a day or two with the second dose. But this is a minor price for protection from much more severe outcomes, the risk of which increases dramatically with age. I urge everyone to get vaccinated as soon as you can with whichever vaccine is available. And I am immensely grateful for Virginia Huffman’s and Ann Campbell’s great work with their colleagues across 68th street that has enabled a growing number of members of the Rockefeller community to access the vaccine. There also are sites across the city that are delivering vaccine by appointment for those eligible by the state’s criteria. You can subscribe here to be notified when new first-dose appointments are available through New York State.

Otherwise, the news on the pandemic is mixed. The national number of new cases each day has come down substantially, from more than 250,000 to about 150,000. But New York has not done nearly as well, and has gone from one of the leading lights in the nation to having the 6th highest case rate per capita in the country, with New York City having nearly the same high rate as the state, with 65 new cases per day per 100,000 population; this compares to a national average of 49 new cases per 100,000 population. Nonetheless, the NYC new case rate has peaked and come down slightly over the last two weeks.

New cases continue to be found by mandatory testing on campus. Since my last community email 14 days ago ago, 15 new cases have been diagnosed among our on-campus population. About half of these individuals have been asymptomatic. None have had evidence of on-campus transmission by either contact tracing or sequencing of the viral isolates. There are currently 29 people on the watch list who have not had a positive test.

And there are some clouds on the horizon. Three variant strains of the virus have emerged in the UK, South Africa and Brazil that are more infectious owing to mutations in the spike protein. There is concern that these variants will produce another surge in infection rate in the US in the coming months. Moreover, the South African variant in particular may be less inhibited by the antibodies produced in response to the current vaccines and to prior infections. Nonetheless, it seems clear that the existing vaccines will still have substantial efficacy in fighting these new strains of virus, but we won’t know the degree of protection for a while yet. As these new variant viruses begin to spread across the country, the best advice is to increase vigilance with mask wearing, social distancing, and hand washing. Most cases appear to come from close contact with an infected person indoors in close quarters, so beware and avoid unnecessary indoor gatherings with groups outside your household.

Last week, our nation inaugurated a new president in a moving ceremony that served as a counterweight to the scenes of chaos and violence that were broadcast from our nation’s capital in early January. It was a triumphant moment for our democracy, and all indications suggest that the incoming Biden administration will be a competent and compassionate one. Anthony Fauci, the newly named chief medical advisor to the president, will take a lead role in coordinating the federal government’s response to the pandemic; he has promised that expertise will be elevated in the process and that science and data will drive decision-making. Seeing appreciation for the fact that the economy will not return to normal until the pandemic is controlled is very encouraging, and it is reassuring that the new administration has publicly stated it will obtain and hopefully administer 2 doses of vaccine to 300 million people in the US by the end of summer. This would ostensibly be the entire adult population, and is a worthy goal. Just this morning, results of two new vaccine trials are out. While neither appears as protective as the two approved mRNA vaccines, both have some promise, but the timeline for them to gain approval and scale up for clinical use is yet unknown.

With COVID rates remaining unsettlingly high, it is clear now that our operations will continue at best at the “modified phase III” level for the foreseeable future, at least through the spring and into summer, and we stand ready to respond to changing conditions with changes in operational guidelines if they become needed. Both the Research Restart Committee and the Emergency Preparedness and Response Committee continue to meet regularly to review the evolving situation. As a reminder, weekly testing is now mandatory for all those coming to campus. I am pleased to report that compliance with this policy has been very high—thanks to everyone who is participating, and for your ongoing cooperation with other guidelines: social distancing, mask wearing, and occupancy limits. It is because of these efforts that we have been able to prevent community spread on campus.

I’m pleased to report that to better assist parents with their ongoing challenges balancing the demands of work with the realities of virtual learning, on February 1 we will begin an after-school program that will complement the successful remote learning classrooms that currently allow K-8 children to attend virtual classes in small, supervised pods on campus. Like the full-day program, it will be run by the YMCA. Coverage is provided on school days from 2:40 to 5 p.m., and children who attend PS 183 will be picked up and escorted to campus by a YMCA staff member. For more information on tuition and other details, please get in touch with HR. Thanks to Virginia Huffman and her team for their exceptional efforts to make these programs work for our community, and to the YMCA personnel who are running the classrooms.

This Monday we held our second Talking Science program, a series of virtual live webinars for high school students, teachers, and science enthusiasts. Chibuzo U. Enemchukwu, a former Rockefeller clinical scholar now at Hunter College, gave an outstanding talk on how science can be used to advance health equity, particularly in light of the COVID pandemic. Over 1,200 people attended. The next Talking Science event will be on February 8 with Paul Bieniasz. I encourage everyone to attend.

Sadly, I have two deaths to report this week. You will have by now seen my earlier e-mail on Victor Wilson, an emeritus professor who spent over 50 years at Rockefeller and made seminal contributions to our understanding of the neural mechanisms that govern our balance and posture, characterizing the network of neural connections that connect to the vestibular receptors of the inner ear and the muscles with which they communicate. Our heartfelt condolences go to his daughters and grand- and great-grandchildren.

This week we also lost Mary Xikis, whose job as payroll supervisor in the Finance Office spanned 50 years, eight presidents, and approximately 1.8 million paychecks. Mary, who started at Rockefeller as a teenager, working as a part-time typist in the Bursar’s office, retired in 2014. She was a well-known and beloved member of the community, and our hearts go out to her family and her friends and colleagues in Finance and far beyond.

Finally this week, I am pleased to report that we have installed and unveiled a brand-new exhibit (see photo below) in Caspary Lobby to honor our faculty who over the course of the institution’s history have garnered top prizes in science. It’s a stunning design of interlocked stainless-steel triangles, each dedicated to one of the 57 (so far) Rockefeller scientists who have received a Nobel, Lasker, Gairdner, or Breakthrough Prize, or a National Medal of Science. I encourage those of you who are already coming to campus to stop by and admire this tribute to the impact of Rockefeller over the past 119 years. Many thanks to Frank Hoke, Zach Veilleux, and their colleagues for bringing this project to life.

Please continue to stay safe, be well, and take care of one another. 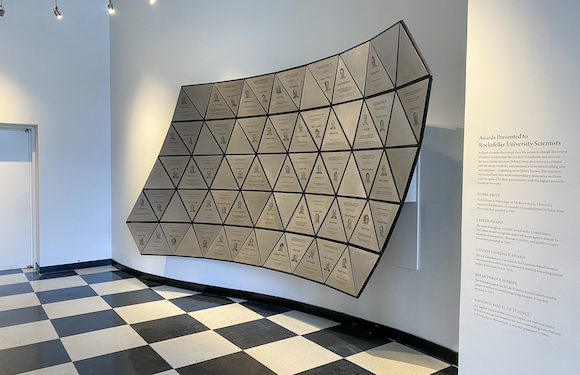