Scientific Focus of the Kavli NSI 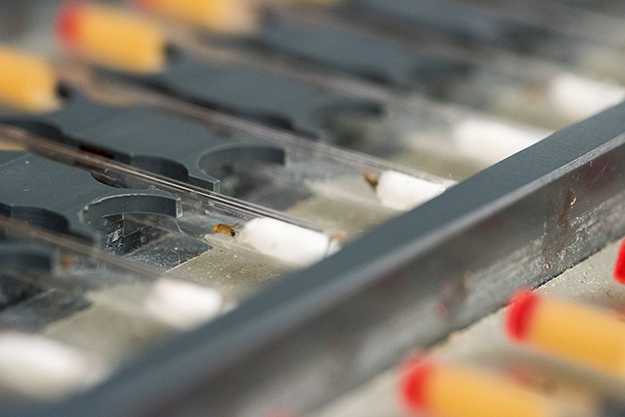 Each of Rockefeller’s neuroscience laboratories has developed a unique research program. It is helpful, however, to frame the work of these laboratories within overlapping categories that cover the full breadth of investigations now under way at the University.

A major feature that distinguishes Rockefeller from other institutions comes down to expectations. Every head of laboratory is expected to accept the challenge of focusing on the big questions that are yet to be solved. Explained in another way, a scientist comes to Rockefeller with the understanding that he or she will tackle problems that are often perceived as intractable or impossible to break open. The late Fred Kavli said he hoped The Kavli Foundation would support work that creates new fields of inquiry in physics, nanoscience, and neuroscience. His philosophy is very much in line with Rockefeller University’s, which encourages work that disrupts existing research fields or sparks the development of fresh approaches that lead to the emergence of new disciplines.

Transformative Collaborations Among Laboratories and Across Disciplines

As members of an institution without departmental boundaries, Rockefeller investigators in brain science are free to collaborate with other groups on campus, including scientists working in other disciplines, as well as with investigators at other institutions. At Rockefeller, no laboratory is restricted to any single area, and the lines of communication between laboratories and areas are always open.

Vanguard Research at the Physics/Biology Interface

For many years, Rockefeller neuroscientists have developed questions and conducted research in conjunction with members of the Center for Studies in Physics and Biology. The Center was founded in 1994 by Nobel laureate Torsten Wiesel when, as president of Rockefeller, he saw the value of building bridges between physicists and mathematicians on the one hand, and biologists–particularly neuroscientists–on the other. The Center for Studies in Physics and Biology began as a pioneering project, setting the standard for initiatives of its kind. Its efforts have produced results that could not have been achieved by any other strategy. Laboratories in the Center join the neuroscience laboratories as members of the Kavli NSI.

The convergence of neuroscience with such burgeoning fields as bioengineering, nanoscience, and computer science, as well as mathematics and theoretical and experimental physics, will accelerate in the coming decades. The question naturally arises: How will Rockefeller University be able to thrive as 21st century science increasingly combines the physical sciences, technology, and neuroscience? How can a small institution, with a strong focus on the life sciences, succeed in comparison to a large academic institution with schools and departments of engineering, nanoscience, computer science, and the other physical sciences? How will Rockefeller adapt to this trend? As shown by the presence of Rockefeller’s physicists, the University has already embraced convergence science. In fact, this is an area where Rockefeller has key advantages. The University’s neuroscience investigators have the freedom to work with the best-qualified scientists, rather than being restricted to partnering with members of a local academic department. At the same time, outside experts often want to build coalitions with Rockefeller’s internationally recognized neuroscience groups.

Rockefeller is compact and biology focused–but it is not limited or self-contained. In fact, the University’s neuroscientists have developed productive relationships with many off-campus groups. From a geographical perspective, Rockefeller neuroscientists are in a situation no different from that of biomedical investigators at most large universities. At many institutions, the basic science campuses, schools of engineering, and medical schools are often miles apart. In Manhattan, where distances are short and public transportation is abundant, Rockefeller investigators have ready access to the Courant Institute of Mathematical Sciences and the engineering schools of NYU and Columbia. Rockefeller investigators are adept at taking advantage of this proximity to identify ideal collaborators, as their scientific interests evolve in new and often unforeseen directions.

The impact of scientific convergence is evident in Rockefeller’s neuroscience laboratories, which are seeded with investigators trained in physics, engineering, and computer science. The multi-disciplinary representation in the University’s neuroscience laboratories shows how the definition of “biologist” is changing, as the borders between the life sciences and the physical sciences become increasingly porous. Rockefeller’s neuroscience labs are in the vanguard of this wave of change, and they are pushing technological approaches past their limits in order to achieve ambitious goals.

Throughout the University’s history, many of our most distinguished scientists have devoted considerable effort to designing and custom building equipment and technologies that have made their groundbreaking discoveries possible. Others have sought the advice and participation of technology leaders from outside the University, when their investigations have reached a critical stage at which such help has become essential.

Building Inter-Institutional Connections through Sharing of Technology and Information

Rockefeller neuroscientists are leaders in developing tools and methods that are easily shared, adapted, and applied, helping to advance investigations internationally. The discoveries and technological innovations that are born here are rapidly and broadly disseminated.