A face is more than a static collection of features. A shift in gaze, a tightening of the lips, a tilt of the head, these movements convey important clues to someone’s state of mind. Scientists know that two particularly social and visual creatures, humans and rhesus macaque monkeys, have a network of small areas within their brains that become active when shown still images of faces. But it hasn’t been clear if the same areas are responsible for processing changing expressions and other facial movements. 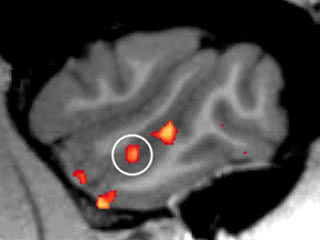 Spotting movement: A network of face processing areas within the macaque brain (red and yellow, shown from the side) responds selectively to face motion, researchers discovered. Their work also revealed a new so-called face patch within this network (circled).

New research by Clark Fisher, a graduate student in Assistant Professor Winrich Freiwald’s Laboratory of Neural Systems at The Rockefeller University confirms that they are. Fisher and Freiwald, building on earlier work by graduate student Pablo Polosecki, found that these face-processing areas, which they call patches, within a macaque’s brain appear to respond selectively to the motion of faces, while reacting much less to other types of motion.

“Based on input from the eyes, the brain’s visual system reconstructs reality, a process that starts out with attributes, such as form, motion and color, that the brain then integrates to build meaningful representations of the world,” Freiwald says. ”This work reveals how the macaque face processing system reunites two individual streams of visual information – face form and face motion – as it recreates the social reality of a face as a macaque sees it.”

Freiwald has been studying brain patches linked to facial recognition for over a decade, and was a contributor to a recent report by the National Research Council that evaluated the science behind eyewitness identification. In previous work with his colleague Doris Tsao, now at the California Institute of Technology, he found that a network of interconnected brain patches found along a deep groove in the sides of the macaque brain form a specialized system for processing faces, just as had been shown in an analogous part of the human brain.

While the system for processing still faces appears similar between humans and macaques, studies of facial motion turned up inconsistent results between the species. Human research said, yes, face patches respond specifically to facial motion, with one patch even reacting more strongly to moving faces than to still ones. However, work with macaques suggested, no, this area of the brain seems to respond to facial motion just because it is motion, not because faces are involved. Given that humans and macaques are close relatives in evolutionary terms, this discrepancy perplexed Freiwald and Fisher.

Brain anatomy makes this puzzle difficult to solve because the patches of interest are located in a part of the macaque brain, the superior temporal sulcus, that also contains areas that respond to motion in general. This creates a challenge for researchers trying to interpret what is going on in this part of a macaque brain when it sees a moving face.

To tease out the distinction between a response to general motion and one specific to faces, Fisher used high resolution scans, known as functional magnetic resonance imaging, to record changes in blood flow in and around the superior temporal sulcus.

He showed the macaques a variety of movies of fellow macaques making expressions – aggressively baring their impressive canine teeth, pleasantly smacking their lips, and making faces as recognizable to macaques as a smile and a grimace would be to a human. All the while, the macaque’s head moves, as if turning to address others around it. The researchers made these movies themselves by filming macaques in front of a blue screen. For comparison, Fisher also showed the macaques images of static faces, as well as moving and static objects, such as toys. All five of the previously known facial patches responded preferentially to moving faces over moving objects, suggesting that macaques have neural machinery dedicated to processing both faces and the movement associated with them. The scans also revealed a surprise: A sixth, previously unknown face patch, which the scientists refer to as the middle dorsal patch. “The middle dorsal patch turned up sporadically in response to static faces, but as soon as we started showing moving faces, it reliably appeared in each brain hemisphere for every macaque,” Fisher said. “A similar movement-preferring patch has been identified in humans, and it appears that the middle dorsal patch could be the macaque equivalent.”

Their experiments also uncovered a new puzzle; some of the patches were more responsive to normal movies depicting natural motion over movies containing the same series of movements jumbled together randomly. The other patches “preferred” the unnatural jumbled movies. It’s not clear why, but it is evidence of division of labor among the patches, Freiwald says. By better understanding what they do, individually and together, we will be able to better understand social behavior and its many disorders, he says.

“Recognizing someone, automatically assessing that person’s mood, maybe generating a smile back, these actions all depend on the brain’s ability to represent a face,” Freiwald says. “It is possible that the patches’ dual sensitivity to form and motion goes beyond simply integrating those attributes, and hints at how we become aware of and interact with a fellow being.”